So the distinction between the living soul and the dead body 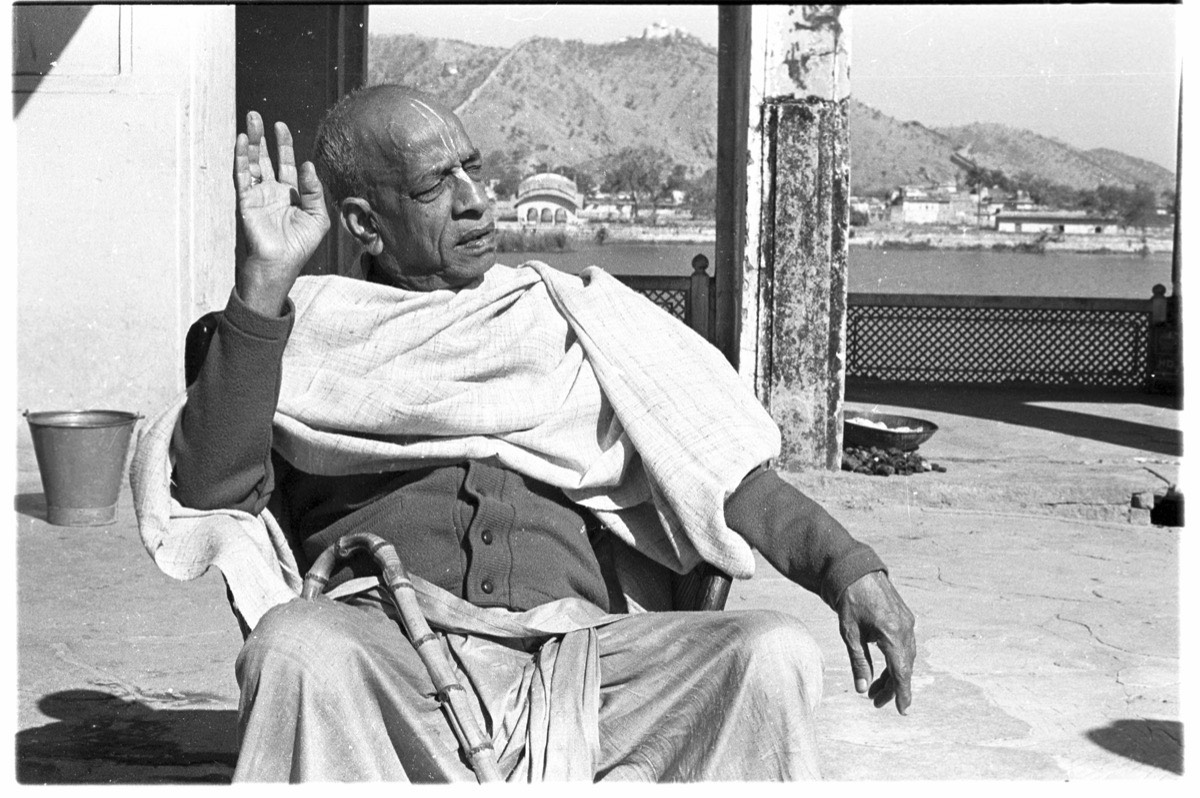 Know that which pervades the entire body is indestructible. No one is able to destroy the imperishable soul.

So any intelligent man can understand that the real father, within the body, was a different thing. But our ignorance is so great that we accept this body, this dead body, as my father. This body is not only dead now; it was always dead. ¶

Because the living soul was there within this dead body, it was moving. This is the fact. Just like a nice motorcar is running, but when the driver is not there, the motor is lying there, idle. If one identifies with the motorcar, the driver of the car, that is foolishness. ¶

Yasyātma-buddhiḥ kuṇape tri-dhātuke [SB 10.84.13]. Anyone who is identifying this dead body, or this material body, which is a composition of tri-dhātuka, kapha-pitta-vāyu, some blood, flesh and some secretion, and some bones—if anyone identifies the self with this lump of matter, then he is described as no better than cow and ass. ¶

So at the present moment especially… This ignorance is there always in the material world, that one is identifying this material body with the real self. The self, the soul, is different. It is not this material body. But our modern education, everything, advancement of knowledge, philosophy, everything on the basis of…, on this wrong conception of life. So to give an, a glimpse of idea what is that soul, how it acts, here Kṛṣṇa, Lord Kṛṣṇa, informs us: ¶

Know that which pervades the entire body is indestructible. No one is able to destroy the imperishable soul.

So the soul, the presence of soul, is perceived by the consciousness. That consciousness… Just like the presence of sun: even I was blind, I could understand the sun is there because the sunlight and heat, I am experiencing, without seeing the sun. When, as soon as I come to the sunshine, I feel light and heat, therefore immediately I can understand there is sun. It is not very difficult. Similarly, just like we try to… ¶

When a man is dying, we try to feel whether the man is breathing, or he’s feeling touch sensation. These are the test. So the touch sensation is there so long the soul is there. Now I am living body. If somebody pinches my body, because the consciousness is all over the body, so I feel, “Somebody’s pinching me.” But when the conscious…, consciousness is not there, if somebody chops up my body I will not protest. ¶

So Kṛṣṇa says, “That consciousness is avināśi.” After the death of…, after the annihilation of this body, which we call dead, the consciousness is not dead. That we do not understand. There is no science; there is no philosophy. Everything based on a foolish assumption. ¶

Their proposition is that this consciousness is a symptom of combination of matter. That is Buddhist philosophy. They do not accept the existence of soul. “The consciousness is a combination of matter.” But if it is a fact, then why don’t you, if some matter is lacking, why don’t you bring that matter or chemical and inject in the dead body and make it again conscious? Why it is not possible? What is your argument? ¶

Of course, the driver is there. But foolish person, they do not understand: simply combination of matter will not act. There must be a driver, a living person. Then the motorcar will go. So supposing the combination of matter, that the petrol is finished. So we can bring petrol; again the motor runs. So if this body was running simply on combination of matter, and some matter is lacking, so why not bring that matter and put into it, and it will run? But that is not possible. ¶

Those who are seers of the truth have concluded that of the nonexistent there is no endurance, and of the existent there is no cessation. This seers have concluded by studying the nature of both.. We have discussed this verse. That is living force. And Kṛṣṇa says, vināśam avyayasya asya. This consciousness has no annihilation. Vināśa. Nobody can kill this consciousness, or the soul. ¶

For the soul there is never birth nor death. Nor, having once been, does he ever cease to be. He is unborn, eternal, ever-existing, undying and primeval. He is not slain when the body is slain.: “The consciousness, or the spirit soul, is never killed, never annihilated, on the destruction of this body.” ¶

So this is a great science. Unfortunately, the so-called scientist, he has no idea. He does not know. They simply say that “We do not know, but we are trying to know.” That’s all right. But here is the knowledge, perfect knowledge, in the Bhagavad-gītā. Why don’t you take it? That they will not take. They’ll go on speculating and promise falsely that “In future we shall be able to inject some matter within the body and the body will again become alive.” ¶

So we have to understand from the authority. There are so many arguments. Now, if you say, “This body’s dead because the blood has become white. Blood corpuscles, they are now become white instead of becoming red,” so if that is the possible, so why don’t you make the blood red, by some chemical injection or by adding some color, as soon as the blood becomes red? ¶

So all the arguments of these foolish scientist, or so-called logician, that can be, I mean to say, nullified if you are intelligent. We have to take…, accept it, because it is said by Kṛṣṇa, the Supreme Personality. Because we cannot say anything why it is avināśi, why this body’s not avināśi, but the consciousness is avināśi; that we cannot explain. ¶

The Supreme Lord is situated in everyone's heart, O Arjuna, and is directing the wanderings of all living entities, who are seated as on a machine, made of the material energy.. That Supersoul is present both in you and in me. Kṣetra-jñaṁ cāpi māṁ viddhi sarva-kṣetreṣu bhārata [Bg. 13.3]plugin-autotooltip__small plugin-autotooltip_bigBhagavad-gītā As It Is 13.3

So that consciousness is there. Because the universal consciousness of Viṣṇu is there, therefore everything within the universe is working so nicely. Not that nature. Nature, you can compare with your body. The material nature is there, but without the soul’s presence, the consciousness being there, it will not work. Therefore as this universe, material cosmic manifestation, is working very nicely, you have to accept there is God. You cannot deny. ¶

The Personality of Godhead is perfect and complete, and because He is completely perfect, all emanations from Him, such as this phenomenal world, are perfectly equipped as complete wholes. Whatever is produced of the Complete Whole is also complete in itself. Because He is the Complete Whole, even though so many complete units emanate from Him, He remains the complete balance.. That, by God’s creation, everything is complete. There is no flaw. But because we are creating disturbances, the world situation is different. We are creating disturbances. By God’s creation, everything is nice. Everything is fine. ¶

We are traveling all over the world three times a year, and we see in Australia and Africa and other countries, there are so much vacant places. And food can be produced, enough food can be produced. Enough milk can be available for feeding all this population. That is God’s arrangement. ¶

But the difficulty is that we are quarreling amongst ourself. I am thinking “Indian.” Somebody’s thinking “I am an American.” Somebody’s thinking “I’m Australian.” “You cannot come here. You…, I cannot allow you to come to my country,” the immigration department. Therefore the difficulty. By God’s arrangement, there is everything complete. But I am disturbing. I am encroaching amongst God’s property: “This is mine.” Therefore there is disturbance. ¶

Therefore the only solution of the whole world problem is Kṛṣṇa consciousness. There is no other solution. The only solution. Kṛṣṇa consciousness means when people will be educated to understand that this planet does not belong to America or India and Africa; everything belongs… Sarva-loka-maheśvaram [Bg. 5.29]plugin-autotooltip__small plugin-autotooltip_bigBhagavad-gītā As It Is 5.29

The sages, knowing Me as the ultimate purpose of all sacrifices and austerities, the Supreme Lord of all planets and demigods and the benefactor and well-wisher of all living entities, attain peace from the pangs of material miseries., as Kṛṣṇa says: “I am the proprietor of all the planets.” When you understand this, that is Kṛṣṇa consciousness. Then there will be peace. ¶

Therefore this Kṛṣṇa consciousness movement is very important, to educate people. Because foolishly they are claiming God’s property his property. Nothing belongs to us. Even this body does not belong to me. As soon as the time factor is finished, my body’s finished. So I have got this body, say, for seventy-six years ago, and say after ten years or five years, it will be finished. ¶

So before my body was created, the world was there, and when my body will be finished, the world will remain there. Then how can I claim that this world belongs to me? This is called illusion. This is called ignorance, mūḍha. Mūḍha means one does not know to whom the property belongs, but foolishly he’s claiming that “It is my property.” ¶

This Kṛṣṇa consciousness movement, in other words, it is spiritual communism. The material Communism which is going on, that is defective, because this Communist movement is centered round the state. But when there will be perfect communism—īśāvāsyam idaṁ sarvam [Īśo mantra 1]plugin-autotooltip__small plugin-autotooltip_bigŚrī Īśopaniṣad, Mantra 1

Everything animate or inanimate that is within the universe is controlled and owned by the Lord. One should therefore accept only those things necessary for himself, which are set aside as his quota, and one should not accept other things, knowing well to whom they belong., the center will be God, Kṛṣṇa—that will be perfect. When everyone will understand that Kṛṣṇa is the central point, Kṛṣṇa is the proprietor, Kṛṣṇa is the enjoyer, when perfectly we come to that Kṛṣṇa consciousness, there will be peace and prosperity. Otherwise it is not possible. ¶

Whatever action is performed by a great man, common men follow in his footsteps. And whatever standards he sets by exemplary acts, all the world pursues.. If the so-called leaders, they become Kṛṣṇa conscious, they understand the philosophy, then others will follow. As at the present moment, because the leaders are foolish, blind, they have no spiritual knowledge, all the population of the world become godless. ¶

Why they shall not accept, unless they are ignorant and less intelligent? Everything is there. The Bhagavad-gītā is left for this purpose. It was instructed not to Arjuna, but to the whole world, in the midst of Battlefield of Kurukṣetra. So the whole world is a battlefield now. They should learn the teachings of Bhagavad-gītā and thus become happy within this world. ¶