Rāmeśvara: Prabhupāda has a very busy schedule coming up in the next month and a half.

Rāmeśvara: He’s going to Detroit, Toronto, Pittsburgh, and our farm in that area, then Washington, D.C., New York, London, Paris, Rome, Tehran, and back to Bombay, all within about forty-five days. 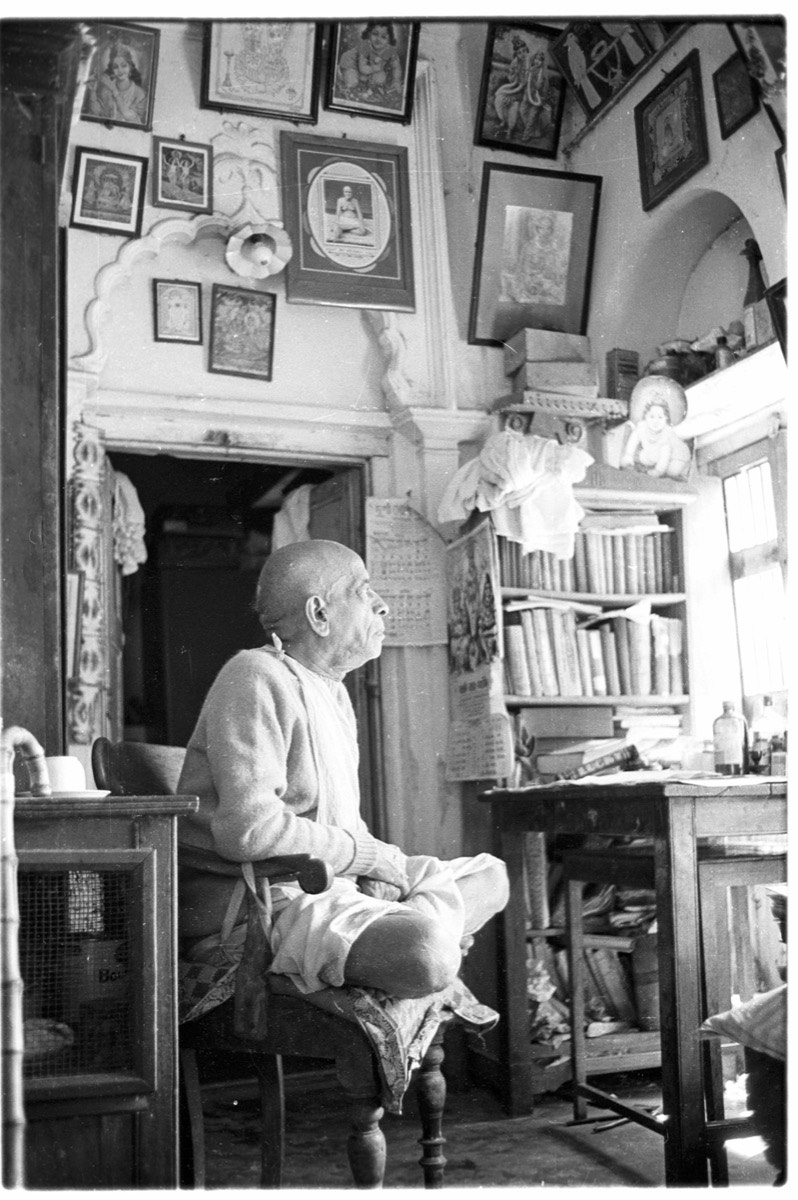 Rāmeśvara: Prabhupāda has a very busy schedule coming up in the next month and a half. ¶

Rāmeśvara: He’s going to Detroit, Toronto, Pittsburgh, and our farm in that area, then Washington, D.C., New York, London, Paris, Rome, Tehran, and back to Bombay, all within about forty-five days. ¶

Rāmeśvara: Oh. The new center in Athens. It opened so fast, it’s… ¶

Interviewer: How long will you spend at each stop? ¶

Rāmeśvara: About a week. ¶

Rāmeśvara: When Prabhupāda is there, for us it’s the most…, it’s like our life has come back. ¶

Guest: I was at the airport when he came in, and it was really quite joyous. There were about seven hundred devotees, I would say. The place was just vibrant. ¶

Hari-śauri: They diverted all the other passengers somewhere else because they couldn’t get into the room, there were so many devotees. ¶

Rāmeśvara: The knowledge that Śrīla Prabhupāda is giving us is actually giving us our real reason to be alive. Most of us didn’t know what the goal of life was. You know, we had some ideas about this profession or that, but most of us had no real, you know, aim in life. And this philosophy and this knowledge has now given us proper direction. It’s cleared up a lot of bad qualities that we may have had. ¶

Interviewer: Is this your last trip to America? ¶

Rāmeśvara: He’s asking if this is your last visit. ¶

Interviewer: You feel that you can continue to make those serious travels? ¶

Prabhupāda: Well, I began my traveling in foreign countries at very ripe old age, seventy years. Ten years I’m traveling. This is the fifteenth tour all over the world. ¶

Interviewer: Are you surprised to see the popularity of your teachings in the last few years? ¶

Prabhupāda: I think it is becoming popular. ¶

Rāmeśvara: He was asking if you are surprised that it is being…, that your books are selling so much and that so many devotees are coming. ¶

Prabhupāda: Yes. Yes. Neither anybody has written so many books within ten years. ¶

Guest: How many? ¶

Prabhupāda: Now it is fifty-four. [aside:] Bring books. ¶

Rāmeśvara: I’ve shown him the books already. The universities and the scholars are also very appreciative. At least ninety percent of the universities in America have already ordered these books. ¶

Guest: They are sold throughout the world. ¶

Prabhupāda: Get this light. ¶

Interviewer: Where did you get these paintings? ¶

Prabhupāda: Paintings? Our students did. ¶

Rāmeśvara: Our art studios are here in Los Angeles. ¶

Interviewer: What happens when that inevitable time comes when a successor is needed? ¶

Rāmeśvara: He is asking about the future, who will guide the movement in the future. ¶

Prabhupāda: They will guide. I am training them. ¶

Interviewer: Will there be one spiritual leader, though? ¶

Prabhupāda: No, I am training GBC, eighteen, all over the world. ¶

Rāmeśvara: To see that the original teachings that Prabhupāda has given are not in any way changed. ¶

Interviewer: Well, nothing more, other than, ah, thank you, and I wish you well in your travels. ¶

Prabhupāda: But that, they cannot do it. They cannot make any dull matter moving by chemical combination. Although they cannot do it, still they talk of it. That is another foolishness. We say that you… Egg, everyone can see some white matter, some yellow matter, and some covering, plasticlike. So a chemical, mostly chemicals are white. So combine the chemicals and make white, and cover it with plastic and give it to the incubator. Why the chicken is not coming? Hmm? And why they talk nonsense that it is a chemical combination? They cannot experiment it, neither they can do it, and still they’ll talk nonsense. What do you think? ¶

Interviewer: What do I think? ¶

Prabhupāda: Yes, this nonsense talking that chemical combination, there is life. Why don’t you do it? ¶

Interviewer: I think it’s a continuing to search for whatever the truth… ¶

Prabhupāda: That any nonsense can say, that “I am continuing,” but where is the result? When the result is expected? ¶

Prabhupāda: When the result will be out? ¶

Rāmeśvara: He’s saying they can always pass it off by saying, “We’re continuing to research. One day in the future.” But when will that day come? It is like, Prabhupāda sometimes calls it a post-dated check. ¶

Interviewer: Isn’t that, each individual makes that determination when that day has come? ¶

Rāmeśvara: No. He means in terms of the scientists discovering how to make, create life, or how to put life back into a dead body. They say that it is chemical reaction. Therefore one day they should be able to discover how to do it if it’s simply chemicals. So when will that day come? Prabhupāda’s point is that it’s not chemicals, but that there’s actually a spiritual element. And because they don’t accept that there’s a spiritual element, they’re not searching for it. They’re simply studying the chemicals. So in that way they’re not…, they’ll never reach the right conclusion about what is life, what makes this body move, what is death. Because they’re missing the essential point, the spiritual element. So his question was, What do you think about it? ¶

Interviewer: Ah, my spiritualness is strongly absent from my own person. I… ¶

Prabhupāda: How? Why do you say absent? You are talking. ¶

Interviewer: Well, in the sense that I, I look beyond who I am now, I don’t look very far. At this point in my life, I haven’t made the decision that I need to look. ¶

Prabhupāda: You may decision or not decision, there are two things. ¶

Prabhupāda: There are two things. One is your body and the other, the living force which is moving your body. So there is no question of decision; it is already decided. There are two things. But our point is that two things are there—the material body and the moving force. So what we are speaking, we are speaking of the living force, moving force, and people in general, they’re interested with this body. Therefore our subject matter is little difficult for such common man. We are speaking simply on the subject matter of that living force, what is that living force. Our beginning is from that point, that body is different from the living force. And general people, they do not understand. Although they feel that there is living force something, they say it is chemical combination and so on, so on. But that is not the fact. It is a different commodity, material; or it is not material—spiritual identity, which is different from this combination of matter, this body. So it requires little training to understand. Although it is very simple fact, but their brain is very dull, material. They see daily, but still, they propose so many things which is impractical. Just like you said that it is chemical composition and they’re trying to do it in future. ¶

Rāmeśvara: Śrīla Prabhupāda often says that no one can be happy without knowledge. It’s not possible to be fully happy without knowledge. People suffer due to lack of knowledge. So if this knowledge about this living force is not taught to the people, then they’ll continue to suffer and be in anxiety, suffer diseases, fight among themselves, quarrel. There’ll always be some misery as long as there is this general lack of knowledge about the spiritual element, or the living force. So in that sense we feel a great compassion and a great…, great responsibility to educate as many people as possible about the spiritual science of the soul and about Kṛṣṇa, or God. And that’s the purpose of our mission: to relieve people from their miseries and make them truly happy. ¶

Prabhupāda: Interested or not interested. Child is not interested for education, but it is the duty of the father to make him educated, sometimes punish him. So a child may be foolish, but how the parents can be foolish? It is not that because the human society is not interested, this should be stopped. No. ¶

Interviewer: Well how can you make them interested if they’re not? ¶

Rāmeśvara: Śrīla Prabhupāda has taught us how to experience spiritual pleasure or spiritual happiness by chanting, taking the food that we…, that you and I just took, and through this philosophy. There is genuine transcendental bliss. So when one experiences that pleasure, then other pleasures appear to be insignificant in comparison. So even though someone may not be interested now, if we can give him a chance to experience this higher pleasure, then it’s natural he’ll become interested. That’s the idea. ¶