Prabhupāda: You cannot say that “I have got a different faith. I do not care for the laws of God.” It it is a law... Just like, for example, here in the state, if you kill somebody, then you have to pay for it with your life. So if that is the law in your state, why a similar law in broader sense is not there in the courts of God, law 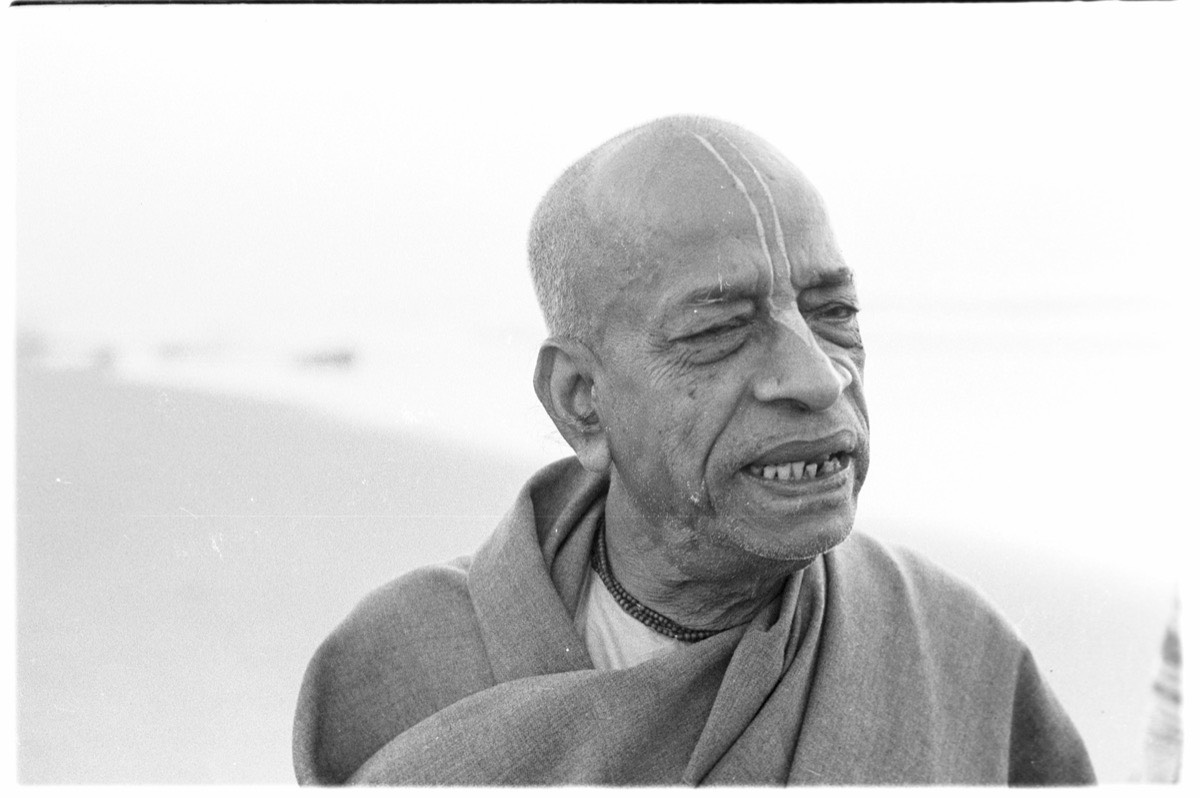 Prabhupāda: You cannot say that “I have got a different faith. I do not care for the laws of God.” It it is a law… Just like, for example, here in the state, if you kill somebody, then you have to pay for it with your life. So if that is the law in your state, why a similar law in broader sense is not there in the courts of God, law…, law of God? You can avoid the arrest by the police and punishment by the state law by tricks, but you cannot avoid by tricks the law of God. That is not possible. ¶

If you violate the law of God, then you will be punished. If you violate the law…, just like if you touch fire your hand will be burned, so this law you cannot violate. Either you are Christian or Hindu or Muslim, if you touch fire, the law of God is that it will burn. So it will not care for you whether you are Hindu, Muslim, Christian. So law of God is applicable to everyone. Either you are Hindu or Muslim or Christian or you have got this faith or that faith, that is not… So we have got such a God whose laws are equally respectable. ¶

Ātreya Ṛṣi: Moreover, we present a God that is lovable. ¶

Prabhupāda: Lovable, yes. Practical. Anyone who comes in touch with Him, he becomes a lover of, immediately. Now how you can say that He is not God? You have to prove that He is not God. That you cannot. [pause] ¶

Prabhupāda: One qualification: he is a devotee of God. That’s all. ¶

Ātreya Ṛṣi: Does he have to be designated by the former spiritual master? He has to be devotee… ¶

Ātreya Ṛṣi: …surrendered and designated. That is…, identifies disciplic succession: both surrender and designation. ¶

Prabhupāda: And by the result. ¶

Ātreya Ṛṣi: And the result of activity. [pause] ¶

Prabhupāda: So far designation is concerned, the spiritual master authorizes every one of his disciple. But it is up to the disciple to carry out the order, able to carry out or not. It is not that spiritual master is partial, he designates one and rejects other. He may do that. If the other is not qualified, he can do that. But actually his intention is not like that. ¶

He wants that each and every one of his disciple become as powerful as he is, or more than that. That is his desire. Just like father wants every son to be as qualified or more qualified than the father. But it is up to the student or to the son to raise himself to that standard. ¶

"Instruct everyone to follow the orders of Lord Śrī Kṛṣṇa as they are given in the Bhagavad-gītā and Śrīmad-Bhāgavatam. In this way become a spiritual master and try to liberate everyone in this land.", “By My order, every one of you become a guru.” Now if one cannot carry out the order of Caitanya Mahāprabhu, then how he can become a guru? ¶

Ātreya Ṛṣi: How are the references made? ¶

Ātreya Ṛṣi: What references are given, Śrīla Prabhupāda? ¶

Prabhupāda: You will find all this in the Caitanya-caritāmṛta, references from Upaniṣad, from Bhāgavata. Caitanya Mahāprabhu never said that “I am Kṛṣṇa.” But the devotees… You know Sanātana Gosvāmī corroborated. You know that? You have read that? ¶

Prabhupāda: So sādhu śāstra guru vākya. So we have to accept the authority of śāstra, guru and sādhu. So those who are sādhu, they accept Caitanya Mahāprabhu. The guru in the…, they accept. And śāstra, there is acceptance. So therefore it is confirmed. Not only He; any avatāra, He must be confirmed by these three sources: sādhu, śāstra, guru. I accept Caitanya Mahāprabhu because my Guru Mahārāja accepted. ¶

He accepted Caitanya Mahāprabhu as Kṛṣṇa; his Guru Mahārāja accepted. And the śāstra is there. When guru says that Caitanya Mahāprabhu is Kṛṣṇa, he quotes śāstra. The śāstra, guru, and those who are actually devotees, sādhu, they also accept. This is the evidence. ¶

This picture, He is being worshiped by saṅkīrtana. Yajñaiḥ saṅkīrtana-prāyair yajanti [SB 11.5.32]. And they are, big men—Śrī Advaita, Śrī Gadādhara, Śrīvāsa and others, followers. That is the proof. Kṛṣṇa-varṇaṁ tviṣākṛṣṇam. He is fair complexioned, but He is always chanting Hare Kṛṣṇa. Kṛṣṇa-varṇam iti. He is describing the science of Kṛṣṇa. These are the statement, and He is doing exactly the same thing. His accepting sannyāsa order is also mentioned in the śāstra. ¶

So everything we have to accept through three channels: sādhu, śāstra, guru. Saintly person, they you should accept; guru should accept; and it must be mentioned in the śāstra. Guru cannot manufacture something. ¶

He must quote from the śāstra and then tell to his disciple. So disciple, as soon as he receives a message from guru corroborated by the śāstra, then he should take it as fact. This is the way. Why there should be any more doubt? What is your argument? ¶

Ātreya Ṛṣi: There is no argument, Śrīla Prabhupāda. ¶

Ātreya Ṛṣi: It’s just the conditioning of the mind, the trouble of the mind. ¶

Ātreya Ṛṣi: They have to be cured. ¶

Ātreya Ṛṣi: They have to be cured. ¶

Ātreya Ṛṣi: Do you have references about that in any of your books, Śrīla Prabhupāda? ¶

Prabhupāda: I don’t think. But there are many ācāryas. Maybe somewhere I might have mentioned. It is not that woman cannot be ācārya. Generally, they do not become. In very special case. But Jāhnavā-devī was accepted as, but she did not declare. ¶

Ātreya Ṛṣi: Women today… There is a very popular topic amongst women: they speak of liberation. And their desire…, their desire to be liberated is sane, but they do not understand. And they object very strongly… I’ve spoken to some of these so-called liberated women, and they object strongly to Kṛṣṇa consciousness, because they think we discriminate against women. So I have been taking advantage of opportunities to describe to them that the only means to liberation for men and woman is through Kṛṣṇa consciousness. ¶

Ātreya Ṛṣi: Yes. This woman liberation movement, they speak like that, but they try to control every man with their body; they try to control their mind. And I told them, when you stop doing that, you’re liberated. And they talk, they talk all the time, but they’re still playing woman games. ¶

Kṛṣṇa-Kāntī: They want to be men in women’s bodies. ¶

Prabhupāda: That is material. It has no spiritual significance. ¶

Kṛṣṇa-Kāntī: Prabhupāda, I’ve heard that every one of us who are in the movement now has had some association with Lord Caitanya [indistinct]. ¶

Kṛṣṇa-Kāntī: Is it so? ¶

Kṛṣṇa-Kāntī: Yes, now. But in some other life, this is what is… ¶

Prabhupāda: Well, other life may not, but he is associating at the present. That’s a fact. ¶

And people still tell us things like this, that “You tell us the philosophy. We like the philosophy. But why do you go on saṅkīrtana?” So what were some of the arguments you presented to these type of people? ¶

"If you have faith in one but disrespect the other, your logic is like the logic of accepting half a hen.. You cut the mouth of the chicken because it eats, it is expensive, and keep the back side because it lays down egg. You see? Intelligent man said, “I am getting every day one egg. So that side, the back side, is very good. But this side is expensive, eats. Cut it.” ¶

So he does not know, he is such a foolish, that if I cut the head, then the egg-giving business will also stop. Similarly, if you accept this philosophy, then you must accept this also. ¶

Ātreya Ṛṣi: Yes. That’s the difference between Your Divine Grace and all these other bhogīs. They make it according to the taste of the people. They change. That’s why this movement is so solid: no compromise. ¶

Prabhupāda: No. Why compromise? My Guru Mahārāja never made any compromise. ¶

Ātreya Ṛṣi: Compromise means you have some material attachment. ¶

Prabhupāda: Yes. Compromise means you don’t want real business, but you want some money by cheating and by bluffing. That’s all. That is compromise. If I aim… Just like this Mahesh Yogi is doing: “Yes, God has given you senses, why should you not enjoy? You simply enjoy. You simply give me thirty-five dollars, I’ll give you a special mantra.” [laughter] ¶

Ātreya Ṛṣi: A Vaiṣṇava is conservative with Kṛṣṇa and liberal with everybody else. ¶

Conservative means unnecessarily you catch some rules and regulation without any meaning or without any utility. That is conservative. That is… In Sanskrit it is called niyamāgraha. [end] ¶