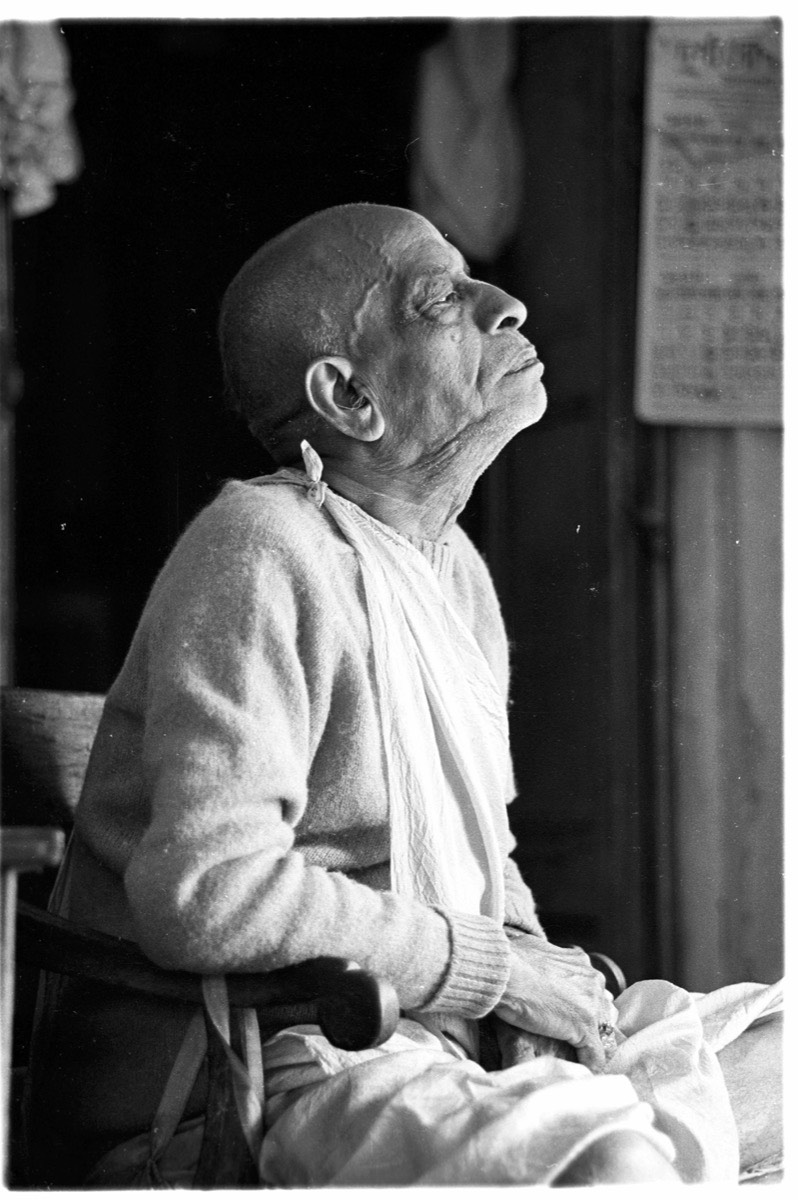 The Tapana Miśra invited him, that “Please accept your bhikṣā at my place.” It is the system when a sannyāsī, or renounced order of life, is in the village or in the vicinity of a… So it is the Hindu system that somebody will invite. So Tapana Miśra invited him to take, accept prasādam at his place, and Lord Caitanya said that “First of all you get him to a barber and have him cleansed of, of his beard and hairs which has grown for so many days. Let him become a gentleman.” The Lord said that “Let him become a gentleman.” ¶

“Just get him to a barber and clean, clean-shaven.” According to the Caitanya Mahāprabhu’s sampradāya, they keep themselves clean-shaven. And only single instance is there, Advaita Prabhu. He had his beard. And Caitanya Mahāprabhu never asked Him to cleanse. Because one reason is that Advaita Prabhu was just contemporary to His father, so He did not like to dictate. But otherwise, all His disciples, they were clean-shaved. ¶

Then, after getting him washed in the Ganges and cleansed by a barber, Candraśekhara offered him a new pair of clothing and… Sei vastra sanātana nā kaila aṅgīkāra. And Sanātana Gosvāmī did not accept that new clothing. Śuniyā prabhura mane ānanda apāra. And when Lord Caitanya Mahāprabhu heard it that Sanātana Gosvāmī, after renouncement, he’s not going to accept any new clothing… So for a really renounced person is that whatever clothing is thrown in the street, he’ll collect and he’ll wear it. He would not purchase any new clothing. That is the order of strictly one who follows… Cīrāṇi. Sanātana… Svarūpa… Śukadeva Gosvāmī, in the Bhāgavata, he says that “Whether old clothings and torn clothings cannot be had on the street? Whether trees are not giving fruit? Whether the rivers are dried up? Whether the caves of the mountains, they are closed? Then why the renounced order of persons go to the viṣayi?” Viṣayi means those, those who are materialistic. Sometimes renounced order of life, sannyāsī, they go to the householders… Of course, that is their duty. But still… So Śukadeva Gosvāmī, a great personality in the renounced order of life, he would live naked. He would not go even to the human society. So those who are following strictly, they don’t make themselves dependent on the householders or on the worldly people. So Sanātana Gosvāmī did not accept that new clothing, and when it was heard by Lord Caitanya, He was very glad. ¶

Again Miśra offered him that new clothing, but he refused. ¶

“If you like to give me some clothing, please give me some old clothing which you have used. That will suffice me.” ¶

Then he offered him one dhotī. Dhotī, in India, they use dhotī, about five yards, one dhotī. So he offered that dhotī, old clothing, and he divided into bahirvāsa and kaupīna, underwear and outward clothing. ¶

Then again one Maharastrian brāhmaṇa also met him. He also invited him that “Next day, you please come to my place.” ¶

That Maharastriya brāhmaṇa, he invited him, Sanātana Gosvāmī, “So long you shall stay at Benares, kindly accept my invitation. You come to my place and take your prasādam.” ¶

Just see. He said, “No, no. I cannot accept sumptuous foodstuff from a brāhmaṇa’s place. That is not my duty. I shall accept mādhukarī.” Mādhukarī is a principle introduced by these Gosvāmīs. Mādh, mādhu. Mādhu means honey. And the bees who collect honey from flower—a drop from this flower, a drop from that flower, a drop from that flower—in this way, he subsists. So this mādhukarī system means a renounced order of sannyāsī or a vairāgī, he should not accept in one place sumptuously. He should go to every householder and take a bit of capātī from this house, a bit of capātī from that house, a bit of capātī from that house, so that the householders also may not be disturbed and they may be benefited. When a real sannyāsī or vairāgi accepts something from the householder, it is a great benefit for him. Therefore to accept little from this house, to accept little from that house, that is also another mercy of the renounced sannyāsī or devotees of the Lord. Yes. ¶

So he did not accept that invitation, that “I shall beg from door to door, and collect my capātī and live on that way.” ¶

Sanātana, he was so strict in renounced order of life, so that gave Caitanya Mahāprabhu too much pleasure: “Oh, it is very nice.” But while he was coming, his brother-in-law gave him a nice blanket. That was on the body of Sanātana. And Caitanya Mahāprabhu several times overlooked about that blanket. ¶

Sanātana Gosvāmī, he was very intelligent; he was minister. He could understand that “Lord is observing my blanket. That means He doesn’t like that I should have such valuable blanket on my body.” So he thought that “I should give up this blanket.” ¶

Thinking this, he went to the bank of the Ganges and he saw one, another vairāgi. He had a torn clothing, and he, after washing it, he gave it for drying. So Sanātana Gosvāmī went there and asked him, “Please take this blanket and kindly give me your, that torn clothing.” So that man thought that he’s cutting jokes with him, that he wants to exchange such a nice blanket. So he said, “Sir, you appear to be very good gentleman. You should not cut joke with me in this…” Then Sanātana Gosvāmī, “No, I am not cutting joke with you. I am really serious. Please exchange this. You take my, this valuable blanket, and give me that torn clothing.” And after taking that torn clothing, when he appeared before Caitanya Mahāprabhu, Caitanya Mahāprabhu was very much pleased. Yes. ¶

“Yes, I was just thinking of you. Now you are completely independent. You don’t depend on anything. So it is giving Me much pleasure. Yes.” ¶

“By grace of Kṛṣṇa, your last attachment also now taken up. It is a great mercy of Kṛṣṇa upon you.” ¶

Then this is a hint by Lord Caitanya that a sannyāsī who has renounced everything, if he lives very gorgeously, with good dress, and good house, and apartment… No. This is not approved by Caitanya Mahāprabhu. Then what is that? What does it mean? A sannyāsī living like a first-class gentleman, smoking, and very nice apartment, and some, I mean to say, lady assistant, secretary… What is this? Caitanya Mahāprabhu did not approve. He must be, as far as possible… Whatever is absolutely necessity, he should accept, not more. Yes. That is renounced order of life, not that in the name of renounced order of life he should live at the expense of the householders, very gorgeously. No. This is not sannyāsa. It is not accepted by Caitanya Mahāprabhu’s sampradāya. ¶

So He says that “You live by begging from door to door, and you have a valuable blanket on your body. This is contradictory. Now I am glad that you have done this.” ¶

"Whether one is a brāhmaṇa, a sannyāsī or a śūdra-regardless of what he is-he can become a spiritual master if he knows the science of Kṛṣṇa."

“It doesn’t matter whether you are a householder, or you are a brāhmaṇa, or you are a renounced order of… If you know the science of Kṛṣṇa—you are fully in Kṛṣṇa consciousness—you are My guru. You are my spiritual master.” ¶

So these are the things we have to learn from the behavior, practical demonstration, of Caitanya’s Mahāprabhu’s life. So tomorrow we shall discuss the questions and answers of Sanātana Gosvāmī. ¶

Thank you very much. [break] ¶

…You see? So similarly, a material qualification, that is not bad, provided they are engaged in Kṛṣṇa consciousness. Otherwise it has no value. Material qualification, if they are engaged… Nirbandhe kṛṣṇa-sambandhe yukta-vairāgyam ucyate. If one is able to dovetail his material qualities in the service of the Lord, then that becomes a great qualification. Viprād dvi-ṣaḍ-guṇa-yutād aravinda-nābha. Aravinda-nābha. Aravinda means lotus flower, and nābha means this navel. So Viṣṇu… Kṛṣṇa is Viṣṇu; therefore His another name is Aravinda-nābha. He has got a lotus flower. On that lotus flower, Brahmā is born. This is omnipotency, omnipotency of God. You have seen that picture in the cover of Śrīmad-Bhāgavatam. That Garbhodakaśāyī Viṣṇu is lying, and there is a lotus flower from His navel, and upon the lotus flower, Brahmā is born, and Lakṣmīji is engaged in serving His lotus feet. But just see. Kṛṣṇa was to beget a son. His wife, Lakṣmī, or Viṣṇu’s wife, was sitting. But He did not take… [break] … He begot a child, Brahmā, from His own navel. This is called omnipotency. He can do anything and everything. Now, when we conceive of begetting a child, oh, we must have a, we must have to secure a wife first of all. Then I have my sex intercourse with her, then she should be pregnant, then I… Then there is child. Otherwise there is no child. Because we are…, we are not omnipotent, we cannot produce child in that way. This is called omnipotency. And He did not require the help of the wife, neither there was necessity. So Kṛṣṇa’s wife, or Kṛṣṇa’s girlfriends, they are not Kṛṣṇa’s necessities. Kṛṣṇa is without any necessity, without any want. But if somebody wants “Kṛṣṇa should be my friend,” “Kṛṣṇa should be my husband,” He accepts. That’s it. He is not in want. He is full in Himself. One who knows this fact, he is pure devotee. You are a… You are offering capātī. Don’t think that Kṛṣṇa is in want of your capātī. But if you offer Kṛṣṇa and take the capātī, you are benefited. Kṛṣṇa bada dayāmaya, karibāre jihvā jaya. I sing this. Perhaps you do not know the meaning, that Kṛṣṇa is very merciful. Because my tongue is always hankering after some good, tasty food, this or that, this or that… But if I eat Kṛṣṇa’s prasāda, then my tongue will be controlled. And as soon as your tongue is controlled, your all other senses will be controlled. These are the philosophy. So don’t think that Kṛṣṇa is in want or Kṛṣṇa is in need—He needs your third-class service. No. He’s full, Himself. But if you can offer your service some way or other, then you are benefited. You are elevated to the transcendental position. That is Kṛṣṇa consciousness. Thank you very much. [end] ¶