Tamāla Kṛṣṇa: “...your letter with enclosures as on reverse. Kindly accept yourself and convey my humble obeisances to my ailing father, and Lord Kṛṣṇa will protect and we have nothing to worry about. 2] Without touching details right now, as desired by you, I beg to submit that a meaningful 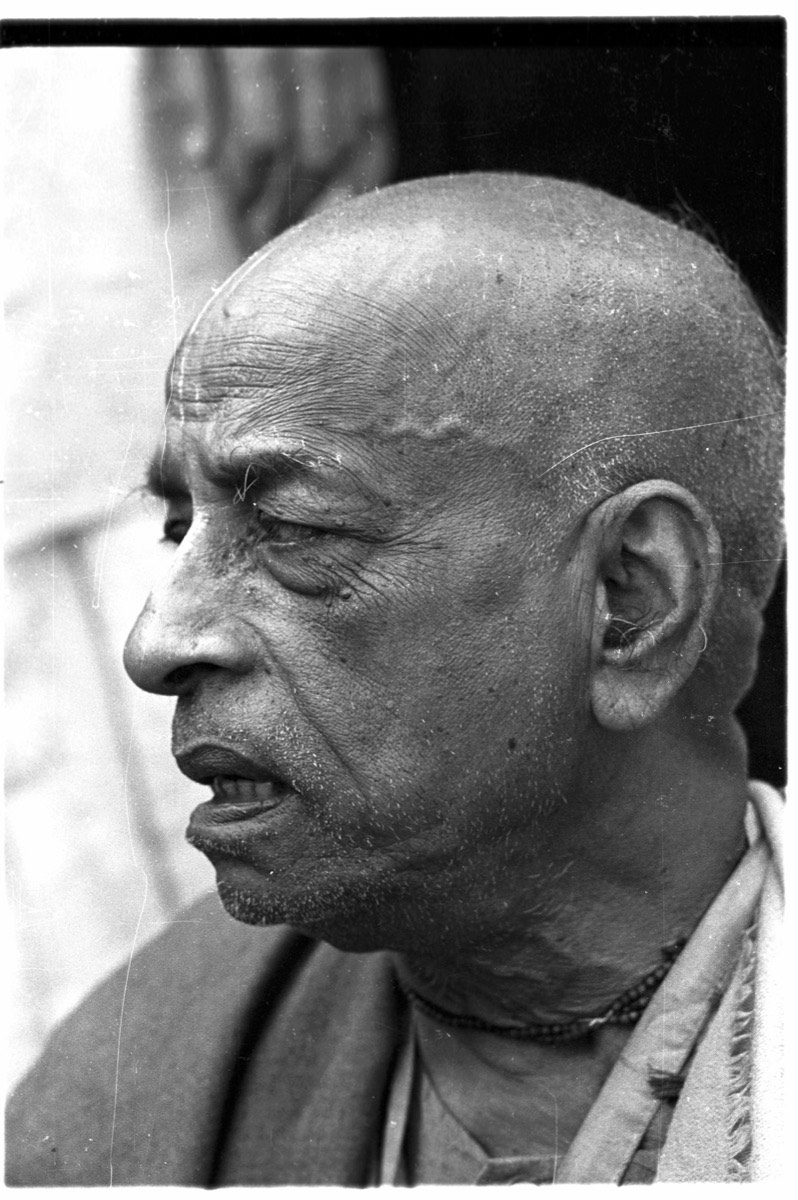 Tamāla Kṛṣṇa: “…your letter with enclosures as on reverse. Kindly accept yourself and convey my humble obeisances to my ailing father, and Lord Kṛṣṇa will protect and we have nothing to worry about. 2] Without touching details right now, as desired by you, I beg to submit that a meaningful ‘further discussion…’ ” Remember, I had mentioned to him that we could have a further discussion if we had any questions, “…that a meaningful ‘further discussion’ could be ensued between us on the subject of settlement upon receipt of a confirmatory letter from the bank concerned either to you or to me directly as to the scheme purported to have been devised by ISKCON. No discussion, perhaps you will agree, without bank’s letter, will serve any purpose towards a settlement. If it is a fait accompli, I feel sure the bank’s letter describing the arrangements in so many words might bear salutary effect on our further discussions as propounded by your good self.” ¶

Tamāla Kṛṣṇa: That’s one point about… Actually, I simply asked him for the name of his bank and the bank account, but he doesn’t seem to want to give that at this point. Seems to have some other idea. Very legally worded letter. “3] Panchashil. I do not stay there, albeit my daily visits. Once I have read somewhere, not the copy sent by you, this draft conveyance, and this is a bunkum.” He calls it a bunkum. Are you familiar with that word, Śrīla Prabhupāda? I think it means like a hoax or something. “The wordings are incoherent and contradictory. The assigners, promoters, are described as overlord. The lessers, superlord, and assignees, purchasers, have been reduced to a transient resident, if not fugitive debtor. In my opinion, causes are there for criminal prosecution against the promoters. Without capable and competent lawyers’ help, this legal matter should not be handled. Until then, keep it in abeyance. Your all the papers as mentioned…” I sent him a copy of the scheme, Śrīla Prabhupāda, as well as a copy of the draft. He says, “All of your papers, as mentioned, are sent herewith back to you.” He didn’t choose to keep them. “While awaiting the bank’s comments, I beg to remain respectfully yours, M. M. De.” He says, “The enclosures are sent under ordinary post to avoid heavy postage in this cover.” He decided to send them by a separate post because it would have been a few extra paisa. ¶

Prabhupāda: Unless the bank confirms, he does not take it seriously. Is it not? ¶

Prabhupāda: So let the bank confirm. What is the harm? Hmm? The bank is not going to confirm? ¶

Tamāla Kṛṣṇa: Oh, the bank will do whatever we ask them to do. ¶

Prabhupāda: Then let them confirm. ¶

Tamāla Kṛṣṇa: If he gives us the bank name and the account of his, then by getting the first monthly installment, then automatically it’s confirmed. ¶

Prabhupāda: I think you should send him, Panchashil. ¶

Prabhupāda: If the bank can send the money, Panchashil? ¶

Prabhupāda: Why they suppose? ¶

Tamāla Kṛṣṇa: Yeah, I personally don’t feel at this point that this… Frankly speaking, I don’t think that this reply on his part is very good. I don’t think it’s proper. He’s speaking about a settlement. First of all there is no settlement. The whole legal way in which he’s worded this letter indicates to me that he’s not taking things in a very… Seems to me he has some motives. He has no reason to doubt this scheme. That’s my point. And if he’s thinking that he has some kind of rights… [break] …other offices. They’re very pleased. And they were especially pleased to get these fixed deposits. Immediately we gave them this six lakhs’ fixed deposits, they were very happy with this. They’ve got about something like 350 accounts already from outsiders within a month or two. They’re very, very pleased. I mean, they feel that this will become a full branch very quickly, and they have a great amount of space, and they’re not at all sorry about the price that they’re paying. And it’s a good income for our temple. ¶

Prabhupāda: No. It is… Plus interest of the money. ¶

Tamāla Kṛṣṇa: Plus interest of the… Of which money? ¶

Tamāla Kṛṣṇa: Fixed deposit money. Well, of course, but that we would have gotten anywhere. But from the point of view of rent, it is certainly very substantial rent. That was your scheme, Śrīla Prabhupāda. ¶

Prabhupāda: No, Kṛṣṇa is giving us all facility. Utilize it. ¶

Tamāla Kṛṣṇa: I especially like that bank, because when you come in, in the center of the wall, instead of seeing some old grumpy-looking bank president, we see Your Divine Grace’s effulgent picture, and it says, right under your picture—it’s a very big picture—it says “I.O.B. Welcomes You.” [chuckles] It’s very nicely done. And in each of the teller’s counters, each of the cashier’s counters, there’s a little picture of Rādhā-Rāsabihārī. ¶

Prabhupāda: And they are getting benefit. ¶

Tamāla Kṛṣṇa: Yes. It was the proper bank to have there. And because it’s right on the ground floor and just near the entrance of the gate, people don’t mind coming from the outside. And I’ve noticed people, after they come and do their banking business, they go for darśana. ¶

Tamāla Kṛṣṇa: Maybe our Deities will get known that people who bank in our bank, that they get more money. [laughs] I think the I.O.B. is thinking like that, that to be connected with the Deity is very auspicious, so they’re accentuating the involvement with ISKCON and Your Divine Grace and Rādhā-Rāsabihārī. ¶

Tamāla Kṛṣṇa: We had no idea how that Hare Krishna Land would ever be successful. ¶

Prabhupāda: Yes. It was a jungle. ¶

Tamāla Kṛṣṇa: That’s what we were thinking. “Why does Prabhupāda want us to live in a jungle?” So far away. Nothing there but mosquitoes, and so many rats. We thought, “Who will come there?” ¶

Prabhupāda: Now when we construct the other building, further down, it will be of value. ¶

Tamāla Kṛṣṇa: Godown will be on the ground floor, and residences and gurukula on the other floors. The only problem is that it’s such a good place that now we can’t get the residents to move out of those other buildings. They say, “Why should we move? Now we have a temple. There’ll be a gurukula. There’s a bank.” It’s very hard to get them out. Of course, we don’t care if they stay, if they’re nice. ¶

Prabhupāda: That was my scheme, but we have not given full freedom to the tenant, our controlling there[?]. ¶

Prabhupāda: You take four brāhmaṇas from South India, four from Vṛndāvana, and four from local. ¶

Prabhupāda: In this way, make it gorgeous, like that. ¶

Tamāla Kṛṣṇa: I’m just thinking, Śrīla Prabhupāda, that each of these brāhmaṇas have their own style or method, and by bringing three different groups, it will be a…, you know, there may be some disagreement amongst them. ¶

Tamāla Kṛṣṇa: Who should be… They will adjust. Each one should have a head brāhmaṇa plus three other assistants. ¶

Prabhupāda: Yaśodānandana should be head. ¶

Tamāla Kṛṣṇa: Yaśodānandana should be the head. He better come back earlier. I heard that he’s only coming back one or two days before the actual ceremony, to India. That doesn’t seem like it’s enough time. ¶

Tamāla Kṛṣṇa: One week. Very grand event. There is no such project like that anywhere else in India—or in the world. Would you like to hear kīrtana, Śrīla Prabhupāda? [break] [end] ¶