Tamāla Kṛṣṇa: Śrīla Prabhupāda? So a letter came. One boy, he wrote me a letter. When I was going to go to China a while ago, before you told me not to, this boy was working with me. And his name is Jita-rati. So he went to China, and he 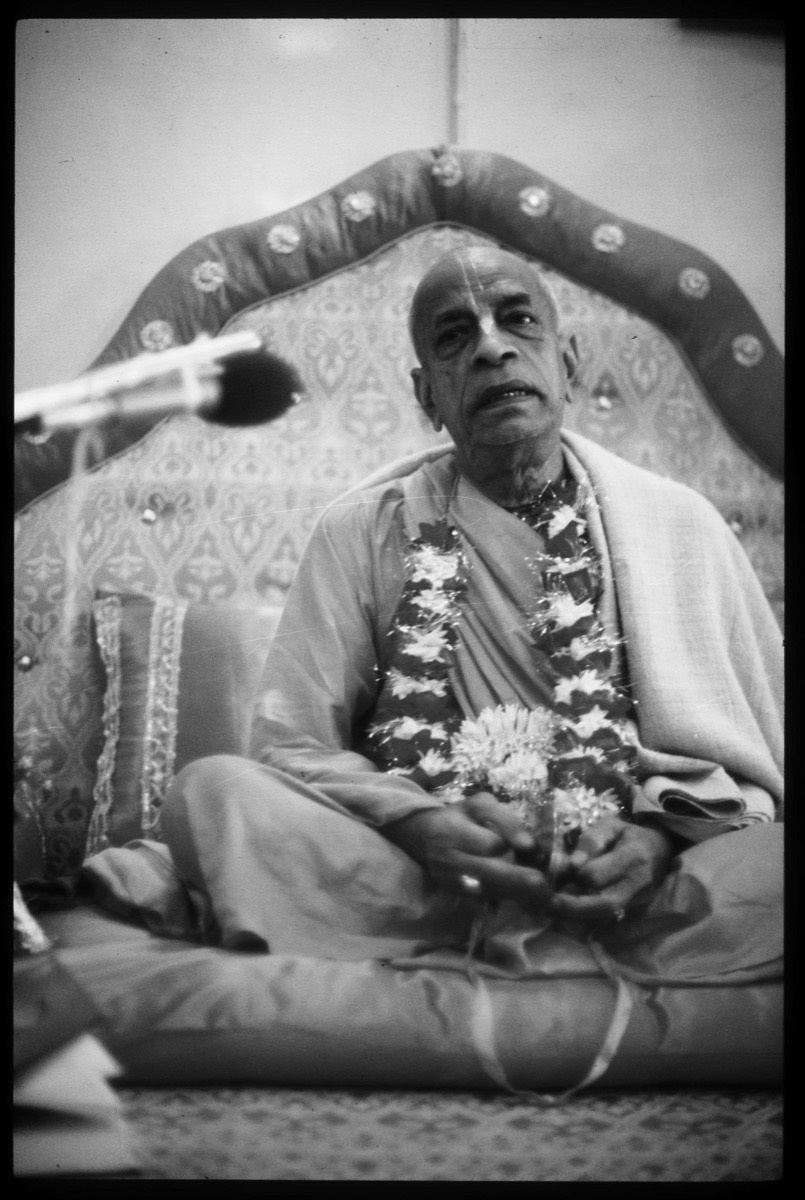 Tamāla Kṛṣṇa: Śrīla Prabhupāda? So a letter came. One boy, he wrote me a letter. When I was going to go to China a while ago, before you told me not to, this boy was working with me. And his name is Jita-rati. So he went to China, and he’s written a report. Should I read it to you? ¶

Tamāla Kṛṣṇa: “My dear Tamāla Kṛṣṇa Goswami and Dhṛṣṭadyumna Swami: Please accept my most humble obeisances unto your feet. All glories to our beloved spiritual master Śrīla Prabhupāda. May Lord Kṛṣṇa, if He so desires, please cure Śrīla Prabhupāda. I’m writing this letter as a brief report on the recent events as a result of my trip to Kwangchow, Canton, China. I arrived on October 16th. Business—attended the Trade Fair but signed no contracts as all the prices were far too high. Research on some items may result in future business. Saṅkīrtana—our real business: I gave two Chinese Bhagavad-gītās to the Chung Shan University, or Dr. Sun-yatsen University as it is called now, in Canton. They were accepted by the administration with assurance of being delivered to the appropriate departments. I inquired from the liaison office how to visit the university. They said it must be prearranged, but they did not know how. From past experience…” This boy had gone to China once before, Śrīla Prabhupāda. He’s a Canadian. He says, “From past experience…” He’s one of your disciples. “From past experience, because of limited time, I decided to just go, although warned not to. I walked past the guard’s house at the gate of the university, hoping not to be seen. After I got forty to fifty yards, when a woman came running after me yelling in Chinese. I finally turned to her and said, ‘No, it is all right,’ and smiled, and I kept walking on. She retreated, by Kṛṣṇa’s grace, and I went on to the first building, where I saw some books through the windows. ¶

As I approached the front door, the first person I met was a middle-aged woman who spoke good English. She was a biology teacher, and we discussed the life principle as she took me to the history department and then reception. There, with two other Chinese persons, we discussed Chinese politics, and I explained the natural social body, varṇāśrama.” He was discussing varṇāśrama with them. “However, as they began to understand how much sense it made, they said I had better talk to the people of the political philosophy but were unwilling to arrange it, and I was unable to also. They admitted to still having a class society in China, but the goal was to have no classes, with the means of production so arranged that everyone could have what they wanted. Such demons. They accept Marx, Lenin and Mao as absolute authority and plan to spread this perfect social system, as they call it, all over the world. I gave one Gītā to the main public library. They accepted when they found out that I was a Canadian and thanked me very much. ¶

Then, on October 25th, with saffron dhotī and Chinese cymbals, I went out on the main street in Kwangchow in the evening, chanting the holy name.” This is in China, Śrīla Prabhupāda. “At first there were many suspicious looks, but in a few minutes I had a large crowd following me. Soon the children were running in front, with some of them dancing. I also began to dance, and a loud uproar ensued from the audience. The crowd grew larger and extended out into the road, where the buses began to honk their horns. Just then a cymbal fell from the string to the ground. As I picked it up and repaired it, the crowd came very close all around and tightly crowded. I chanted loudly, ‘Hare Kṛṣṇa,’ and heard one ‘Kṛṣṇa’ in return. I responded with ‘Kṛṣ-ṇa’ loudly, and three or four answered. Soon I had about twenty responding to the chant, but decided to go on, as the crowd was getting too big. ¶

A few minutes later a man broke through the crowd and grabbed my arm and motioned me to stop. I continued, and soon another grabbed the other arm and pulled me into a shop, closed the doors and offered me a seat. The crowd responded with an uproar and banged on the doors for a little while. I had to wait about fifteen minutes until a person came who spoke English. He told me I was causing interference with traffic, and soon after they let me go. I did not go out again as I did not want to agitate them too far. I had previously chanted in a bus and showed the people pictures of Kṛṣṇa. It was very ecstatic. I have been told since then that the incidents would be heard of by nearly everyone in Kwangchow as a conversation topic. Perhaps the name of Kṛṣṇa will also be repeated many times by many people…” [break] Jaya Śrīla Prabhupāda. ¶

Prabhupāda: So China has sacrificed everything. What is their aim? ¶

Tamāla Kṛṣṇa: In China? Their aim… They say that their aim is to establish a classless society where everyone gets everything that they require. Economic aim. ¶

Tamāla Kṛṣṇa: Their entire outlook is an economic one. They have no… They don’t feel that there’s any importance to culture or any of the finer sentiments except that they may further the economic consideration. Politically also, their political understanding is also ultimately directed for economics. Any of their political dealings with other countries are all ultimately to establish this economic Communism. ¶

Prabhupāda: How human society is falling down. ¶

Tamāla Kṛṣṇa: I mean, from the definition given in the Vedas, they don’t classify as human beings. [pause] ¶

Tamāla Kṛṣṇa: You had said that before a few times also. They are completely restricted in every respect. Whereas in other Euro…, East European countries and in Russia, the professors may read various types of literature, in China they’re not allowed to do that. And if they are ever caught doing that, they immediately are sentenced to prison and they lose everything. And they’re very… The difference in China as opposed to Russia is that in China every few years all the professors are made to be farmers. And also the workers in the factories and the farmers are the predominant controllers of the universities. They are not at all interested in culture or in higher education. Their whole purpose even for the universities is to train up loyal Chinese citizens. Everything is for that end. So no cultural interest would ever be tolerated on the part of the authorities there. And the people are so much controlled by these authorities that they would lose everything. ¶

Tamāla Kṛṣṇa: Śrīla Prabhupāda? You said before that you…, that it is said that you were poisoned? ¶

Prabhupāda: No. These kind of symptoms are seen when a man is poisoned. He said like that. Not that I am poisoned. ¶

Tamāla Kṛṣṇa: Yeah. Did anyone tell you that, or you just know it from before? ¶

Prabhupāda: I read something. ¶

Tamāla Kṛṣṇa: Ah, I see. That’s why actually we cannot allow anyone else to cook for you. ¶

Prabhupāda: That is good. ¶

Tamāla Kṛṣṇa: Oh. You, of course, have been so merciful that sometimes you would take prasāda cooked by so many different people. ¶

Prabhupāda: That should be stopped. ¶

Tamāla Kṛṣṇa: Urine? You want to try for it? Okay. Should we again continue some kīrtana Śrīla Prabhupāda? ¶