Prabhupāda: Guru Mahārāja, he saw this. Now I remember those days, when he was instructing, “Do like this. Do like this.” At that time, I could not understand: “Oh, why he’s talking to me? 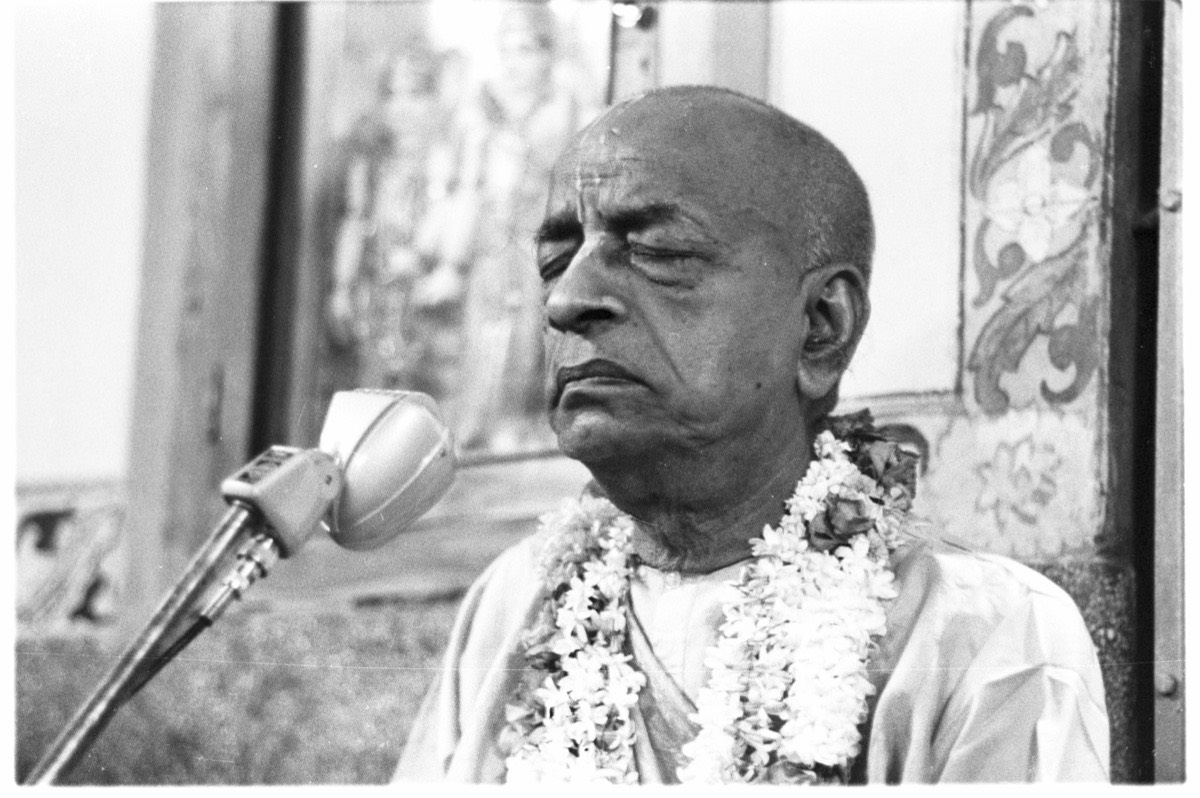 Prabhupāda: Guru Mahārāja, he saw this. Now I remember those days, when he was instructing, “Do like this. Do like this.” At that time, I could not understand: “Oh, why he’s talking to me?” He wanted. [aside:] “Jaya Svāmī! Jaya Svāmī. [indistinct]” The spirit is there. But many, many men, and may not…[indistinct] So just attempt. Ask him. Bring some books when you leave. Then construct a… No, He is giving. Kṛṣṇa is giving money. Within few days you have collected fifty thousand. Where is the scarcity of money? ¶

Gargamuni: Nowhere in the world. Everyone has money. ¶

Prabhupāda: [laughs] Money is coming there. Guru Mahārāja said that “You do the right work, money will come. Money will fall down on your feet.” There is no question of flattering. Do. Work sincerely. Everything will come, whatever you want. I wish I could go there. I would have told[?]. Even in this state I can go; there is no difficulty. But little difficulty… And carried in this chair, I can go anywhere. There is no difficulty. No, where is the difficulty? ¶

Tamāla Kṛṣṇa: No, yeah, as long as you’re sitting… ¶

Prabhupāda: Even I require four men to take care of me, that’s all right. ¶

Tamāla Kṛṣṇa: Whether you’re sitting in here or sitting in Colombo, it’s the same. ¶

Prabhupāda: It is same thing. And I am taken from one place to another by chair. So where is the difficulty? There is no difficulty. It is difficulty by imagination. ¶

Prabhupāda: Jaya Kṛṣṇa-Balarāma. Who has got strength like Balarāma? Balarāma, He can do everything by His strength. We are depending on Him, Balarāma. He can please everyone, and He has got immense strength to do anything He likes. Jaya Kṛṣṇa-Balarāma. Now these sakhīs, aṣṭa-sakhī, there is no instance we have displayed. Why they should be kept inside? Only one man should be under a [indistinct], in an upturned [indistinct]. ¶

Tamāla Kṛṣṇa: Temple is very attractive. People come in, they walk all the way around, looking at all the paintings, talking about them… ¶

Tamāla Kṛṣṇa: It’s the most unusual temple in Vṛndāvana. ¶

Prabhupāda: And it is not meant for making money. It is meant for giving service. And that is the difference. ¶

Prabhupāda: They are giving in the [indistinct] more and more. ¶

Tamāla Kṛṣṇa: Now, when anyone visits Vṛndāvana, they have to see Kṛṣṇa-Balarāma Mandir. ¶

Tamāla Kṛṣṇa: So Śrīla Prabhupāda, you say that Balarāma is so strong, but you have brought Balarāma here, so you are stronger, I think. ¶