Hari-śauri: ...for myself? That boy that was here with me from Australia, I’ve sent him back this morning.

Hari-śauri: He’s gone back this morning. There is actually two or three major things going on there, so I have to try to get back as soon as possible. There is a purchase of the farm, eight-hundred-acre farm, which comes up in about seven or eight days, and then we have to consider whether to buy that buildin… 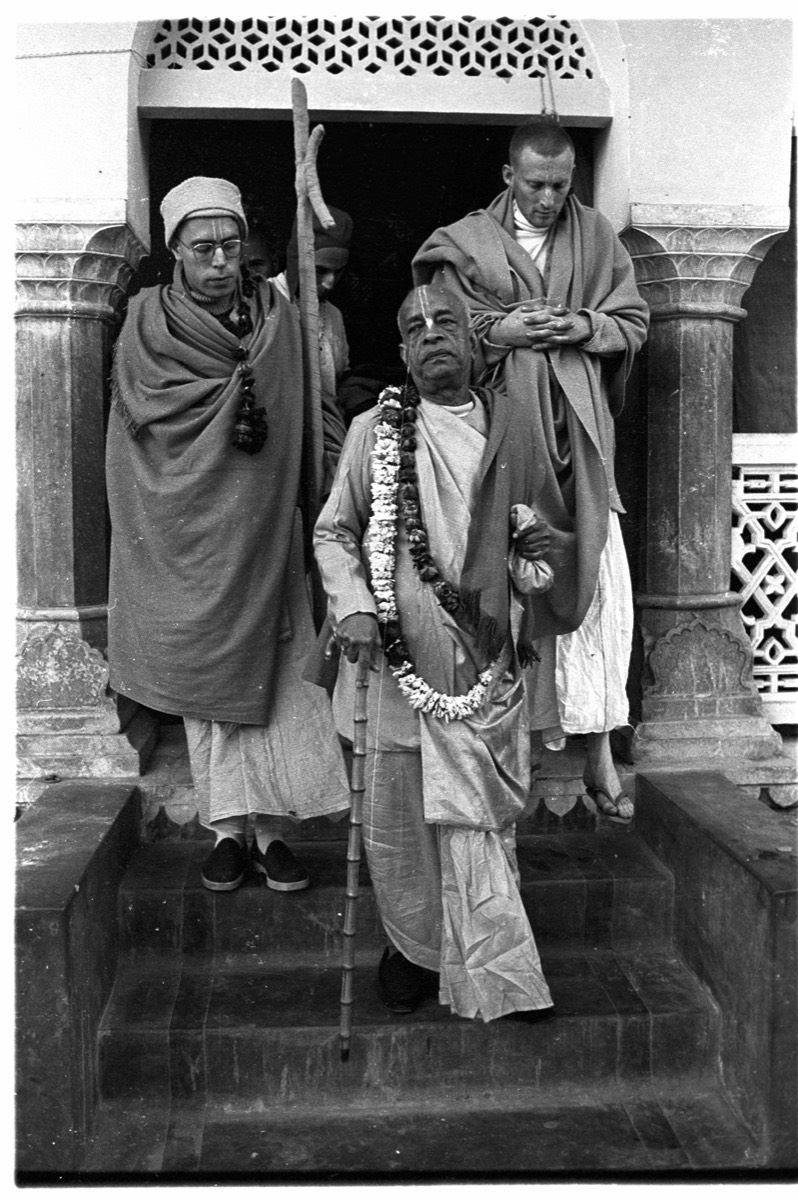 Hari-śauri: …for myself? That boy that was here with me from Australia, I’ve sent him back this morning.

Hari-śauri: He’s gone back this morning. There is actually two or three major things going on there, so I have to try to get back as soon as possible. There is a purchase of the farm, eight-hundred-acre farm, which comes up in about seven or eight days, and then we have to consider whether to buy that building in Sydney. You’ve seen that picture already. And also there’s a big court case coming up in Melbourne. The deprogramming thing is going on there also. But this time the court case is being pressed by… It’s a civil case. The police wouldn’t take it up. So the girl that was kidnapped, we are pressing charges, but through her against the parents. So this is going to be a big case also. So that’s coming up at the end of April. So I have to see what the presentation is like and get more information from Ādi-keśava and make sure that we will press it very strongly, the whole issue. Someone just sent a newspaper clipping about the whole thing. I expect to be going back to Delhi in about two days, to try to speed up the process of getting a re-entry permit. Then once I do that, I can go on [indistinct]. [long pause] [break]

Girirāja: The chief guest is going to arrive at about a quarter to seven.

Girirāja: This evening, the chief guest is coming at a quarter to seven.

Prabhupāda: Who is the chief guest?

Girirāja: Yeah. He is supposed to be one of the leading doctors in India. Especially of heart, cardiology. So I also thought this would be a good night for Svarūpa Dāmodara Prabhu to make his presentation, so that this leading doctor can also attend that.

Girirāja: And the television people are also supposed to come tonight, and show you and them the drama.

Prabhupāda: When you have to go?

Akṣayānanda: The boys can leave at 6:15.

Kartikeya Mahadevia: We have enough time—one hour. And K. K. Dattey and I are working together in one association for the psychic surgery. He is the president, I am the vice-president, so I know him very well, personally.

Kartikeya Mahadevia: Cardiologist. He was cardiologist to the president also. He is very well known. And he is utilizing yoga for reducing the blood pressure in the heart, [indistinct] āsana and all those things. He is very much interested in yogic philosophy also, yoga, haṭha-yoga.

Kartikeya Mahadevia: I think so. He is a very open-minded man to find out good things about anything, whether herbal medicine or yogāsana.

Prabhupāda: So after one hour we shall go?

Kartikeya Mahadevia: And about these two people, Girirāja Prabhu and Yaśomatīnandana[?], who are willing to come, I will take them whenever possible, in April-May or June-July.

Prabhupāda: We have to take the proper… [break] …is not good. You should avoid it.

Girirāja: I think it was Kṛṣṇa’s grace.

Girirāja: Actually she is… Now the mayor, the mayor is scheduled for tomorrow, but he had agreed without checking his diary, and he has to come earlier. So what my idea is that he wants to come at five o’clock.

Prabhupāda: So where he will be best.

Girirāja: Yes. So what I was thinking is that he could stop here for a few minutes and meet you. Actually, his term expires on March 31st.

Prabhupāda: When the chief minister or something like that?

Prabhupāda: But I am going to Juhu on Monday, is it not?

Girirāja: Well, we were originally thinking you could go on Wednesday, but…

Prabhupāda: Oh. If they have arranged. I do not know what is your arrangement.

Girirāja: Some of the newly elected members from the Janata party are coming back to Bombay today and tomorrow. So we will try to invite one of them.

Prabhupāda: You say we have to go back to Juhu on… They say. [break] This is the center of mass movement.

Girirāja: Dr. Bigelow was also a heart specialist. He wrote that… You had that exchange of letters, this doctor in Canada. So he said that he felt that at the moment of death some particle or some force left the body, which was not material and which could be called the soul, and he called upon theologians or scientists to research what is that thing that leaves the body and makes the body become dead.

Prabhupāda: Instead of going on Monday, we shall go on Wednesday.

Tamāla Kṛṣṇa: Yes, that is fixed up now. I think Saurabha will be quite relieved. Śrīla Prabhupāda, the turn-out at the paṇḍāl has been quite good. Many good class of people have been coming. So Girirāja Prabhu and Gopāla Kṛṣṇa Prabhu are thinking to extend the paṇḍāl on about another week, because there is not an extra cost more than about a thousand rupees, since the main cost is in actually building it. So Bhavānanda Mahārāja and myself felt that they could continue the paṇḍāl, and you wouldn’t have to attend. Perhaps on the last day, which would be very big again, next Sunday, you could come. But they could…, you know, the devotees themselves could speak as they….

Prabhupāda: I know that. Very nice. They want to continue for a week?

Prabhupāda: That’s very good. Why it should be closed?

Tamāla Kṛṣṇa: Yeah. You once told us in Delhi that if we could arrange to continue it throughout the year, that would be good.

Prabhupāda: You want to do that, then do it. I don’t mind. Every week, you can [indistinct]. At least as much [indistinct].

Tamāla Kṛṣṇa: Yes. That means that we will have to send out regular invitation every week on a regular program to our Life Members.

Prabhupāda: It is all right. You do it. We have got so much subject matter for speaking.

Tamāla Kṛṣṇa: So there will be an initiation on Rāma-navamī.

Prabhupāda: Rāma-navamī is upavāsa up till the… Go to observe fasting up to the evening.

Bhakti-caru: Śrīla Prabhupāda, can I prepare this one? [indistinct] sometime in the afternoon? No. Morning only.

Tamāla Kṛṣṇa: Sudāmā Mahārāja’s troupe will be performing Rāmāyaṇa. They are starting to perform tonight the Rāmāyaṇa. Tonight and continuing on through, as far as I know, till Rāma-navamī.

Prabhupāda: I have taken six cāpāṭis.

Bhakti-caru: Do you require anything specific at night? Or that mungoli?[?]

Tamāla Kṛṣṇa: By starving you at night, Śrīla Prabhupāda, your appetite in the noontime is becoming increased.

Prabhupāda: No, I should not take at night. At night, a little milk and barley water only. Light. [break]

Tamāla Kṛṣṇa: Today we’ll leave at twenty-five of seven instead of a quarter to seven. We’ll arrive by seven at the paṇḍāl.

Girirāja: The thing is that the chief guest is reaching at a quarter to seven.

Tamāla Kṛṣṇa: So then we can leave at 6:30. So Dr. Svarūpa Dāmodara will speak this evening, Śrīla Prabhupāda. Would you like us to read from some book, or…

Girirāja: When do you want us to show a few slides, that slide presentation?

Svarūpa Dāmodara: I think only just four or five explaining in terms of precedence. It’s solid that way. The words are just empty. [indistinct] …taking that way. Becomes more, er…

Tamāla Kṛṣṇa: It’s dark. No, Svarūpa Dāmodara Prabhu will lecture after the chief guest, but just before Śrīla Prabhupāda. But by then it will be 7:30, quarter to eight.

Tamāla Kṛṣṇa: So we can arrange for a slide show.

Svarūpa Dāmodara: Also we can speak from slides.