Girirāja: And similarly the today’s government leaders should also take advice from the saintly person.

Prabhupāda: We can give nice instructions. 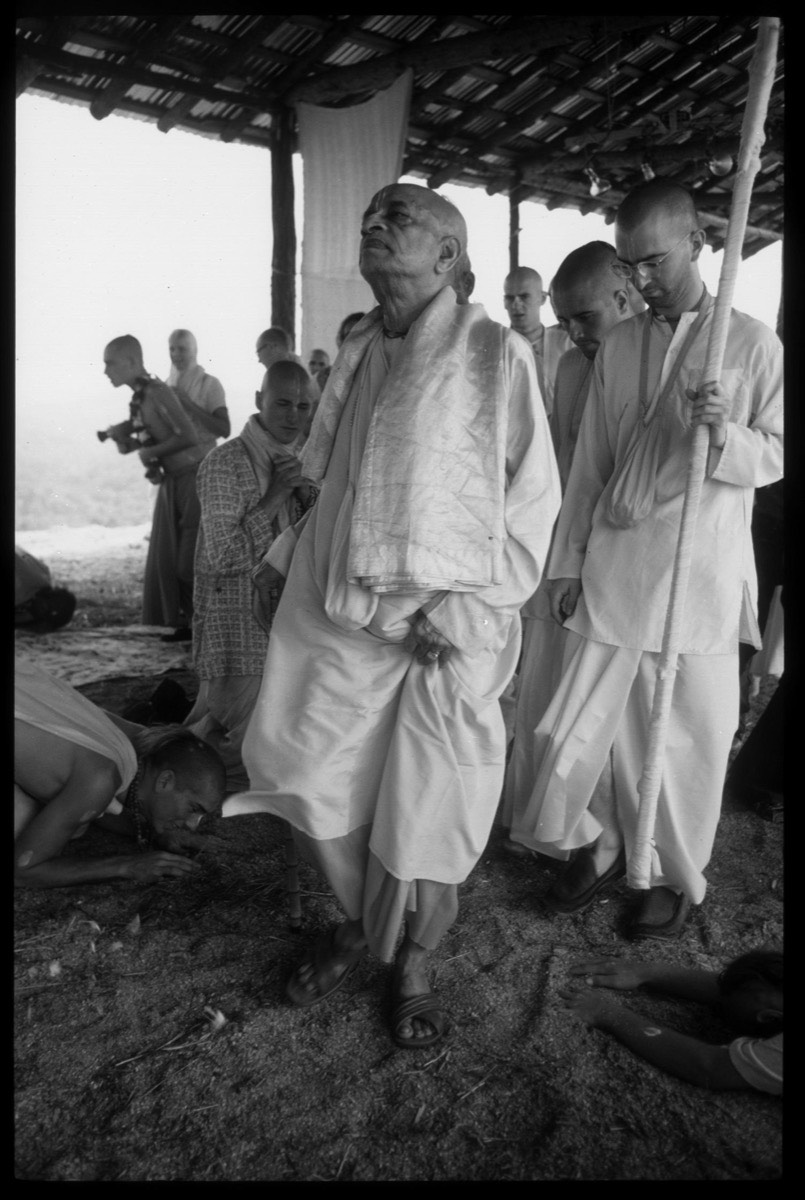 Girirāja: And similarly the today’s government leaders should also take advice from the saintly person.

Prabhupāda: We can give nice instructions.

Girirāja: He wanted to arrange a meeting with Morarji Desai in this week, but I told him that it would be better not to arrange anything until he comes back to Bombay in a week. But he gave me his phone number in Delhi if we want to contact him.

Prabhupāda: You want me to go there?

Girirāja: No, I think it’s better… First of all, as you mentioned last…

Prabhupāda: If he comes, I’ll come.

Tamāla Kṛṣṇa: I think that Bombay is very important, so Morarji Desai must visit here. And when he visits here, he is a devotee of Kṛṣṇa, so we can invite him to our temple. And at that time he can see you.

Prabhupāda: With his associates, invite him, give him prasādam.

Tamāla Kṛṣṇa: That will be more impressive than… You should not have to go. The administrator comes to the guru. And if he won’t come to you, then there is no question of his helping, anyway.

Prabhupāda: Yes. If he comes we shall speak on this.

Girirāja: Now, for tonight’s program, I was thinking that actually there is no need for you to come to the paṇḍāl, because it’s very strenuous, and Dr. Jawar knows us very well. He won’t take offense. And he could, if you wanted, he could come for your darśana anyway, which would be less taxing.

Girirāja: Well, I don’t think it is actually required, because we have a very nice program.

Tamāla Kṛṣṇa: What about tomorrow?

Girirāja: And probably the Industry Minister will also come.

Tamāla Kṛṣṇa: Today, you were saying, it is Monday.

Girirāja: I was saying that since today is Monday, yesterday was Sunday, so most people probably thought that “I’ll go Sunday or else I’ll go on Rāma-navamī.” So today I think fewer people will come.

Tamāla Kṛṣṇa: That’s what you were thinking originally, that you would be going only on certain days to the paṇḍāl, important days. [to Girirāja:] Do you want to ask Prabhupāda about the press conference?

Girirāja: So we wanted to invite the newspaper men to Juhu, and usually they are more inclined to come for these meetings if we give them a nice meal. So that would be… What I was thinking is that if you are taking your meal at twelve o’clock, then if you could meet them for a short time after that, say, at about twelve-thirty, and then after that then they can take their prasādam. Otherwise we could have it in the afternoon, but I don’t think we’ll get as good response, because they are after that; they like that meal to be served.

Prabhupāda: Well, whatever time, you decide. But after taking my meals, I require a little rest.

Tamāla Kṛṣṇa: So by one-thirty or two.

Prabhupāda: Yes, that time would be better.

Tamāla Kṛṣṇa: Two would be good, I think. You could invite them by one for prasādam. They could take for an hour or so. You could show them the movies, and then by two they could see Śrīla Prabhupāda.

Prabhupāda: Yes, you invite them at one.

Tamāla Kṛṣṇa: That will be nice. One o’clock to one thirty, prasāda; one thirty to two, movies; two o’clock, Śrīla Prabhupāda.

Girirāja: We can take them on a tour also.

Tamāla Kṛṣṇa: Yeah. He can give them a tour of Hare Kṛṣṇa Land. I think the more publicity we can get now of these temple and towers, that will get the people’s anticipation all over Bombay very keen, so when it finally opens, millions of people will come.

Prabhupāda: And if Morarji Desai comes to Bombay…

Girirāja: I asked Mr. Rajda if he was coming, so he said that… [break]

Tamāla Kṛṣṇa: They say that this is a sign of inhumanity. That we…

Prabhupāda: Inhumanity means I do not like you; still, I have to mix with you. Is that inhumanity?

Tamāla Kṛṣṇa: Well, if you are my relative, then…

Tamāla Kṛṣṇa: They say that the family unit is the basic unit of civilization.

Prabhupāda: Well, family, that is all right. But even sometimes a father does not like the son, although it is the family. Or the son does not like the father. So what is the wrong there? They must agree to the point that of the same interest. So those who are interested in permanent, I mean to say, life, why they should be interested in this temporary so-called adjustment? [break]

Svarūpa Dāmodara: The goal of life is different. Those who accuse us, they don’t know that goal.

Persons who are strongly entrapped by the consciousness of enjoying material life, and who have therefore accepted as their leader or guru a similar blind man attached to external sense objects, cannot understand that the goal of life is to return home, back to Godhead, and engage in the service of Lord Viṣṇu. As blind men guided by another blind man miss the right path and fall into a ditch, materially attached men led by another materially attached man are bound by the ropes of fruitive labor, which are made of very strong cords, and they continue again and again in materialistic life, suffering the threefold miseries.. This is the modern civilization. They do not know what is the goal of life. And without knowing the goal of life, they are trying to adjust things on this material platform. That will never happen. Durāśayā. Now suppose this race… On the road we see so many four-wheel cars racing. Does it mean this will solve the problems of life? What is the difference? If the dog is running and I am also running in a four-wheel car, so where is the difference? [Hindi] What is the difference? Is that advancement of civilization because I am in a four-wheel Mercedes car and the dog is running on the street? He will also die, I will die; and he will have to change, he’ll have to change body, I have to change body. Next life, I may be a dog like that. Tathā dehāntara-prāptiḥ [Bg. 2.13]plugin-autotooltip__small plugin-autotooltip_bigBhagavad-gītā 2.13

As the embodied soul continually passes, in this body, from boyhood to youth to old age, the soul similarly passes into another body at death. The self-realized soul is not bewildered by such a change.. So my problem is how to stop this business, how to get my real life. So one who is interested in real life, why he should join the dog race? It is all dog race. And they are taking it as advancement of knowledge. That is not advancement. They do not know how to stop. Nature will not excuse you. Kāraṇaṁ guṇa-saṅgo ‘sya sad-asad-janma-yoniṣu [Bg. 13.22]plugin-autotooltip__small plugin-autotooltip_bigBhagavad-gītā 13.22

The living entity in material nature thus follows the ways of life, enjoying the three modes of nature. This is due to his association with that material nature. Thus he meets with good and evil amongst various species.. If you associate with certain type of modes of material nature, then you will have to accept the next body accordingly. The nature will not excuse you. The business is that I have got this human form of life. I must fully utilize it how to get out of these problems. That is life.

Indian: So that is the big problem, because people don’t know how to get out of it.

Prabhupāda: No, they should know. Here we are teaching right. Why the rascals do not take advantage of us? They do not know. Therefore there is preaching. Why Kṛṣṇa consciousness movement is there? Because these rascals, they do not know. Na te viduḥ. We are teaching. Kṛṣṇa is coming. Yadā yadā hi dharmasya glānir bhavati bhārata [Bg. 4.7]plugin-autotooltip__small plugin-autotooltip_bigBhagavad-gītā 4.7

Whenever and wherever there is a decline in religious practice, O descendant of Bharata, and a predominant rise of irreligion—at that time I descend Myself.. As soon as they forget, immediately Kṛṣṇa comes. He sends His representative to remind that “This is not your life. This is life.” Now if he does not take advantage of it, it is his fault. The knowledge is there. University is there. You can go, pass your M.A. examination. But if you go to the prison house and become a pickpocket, that is your fault.

Girirāja: Śrīla Prabhupāda, I think we can go out. [end]