Prabhupāda: Every father loves his son. Therefore this is contradictory. He is blind, but he has called... [microphone rattling]

Surendra Kumar Saigal: He has no locana. 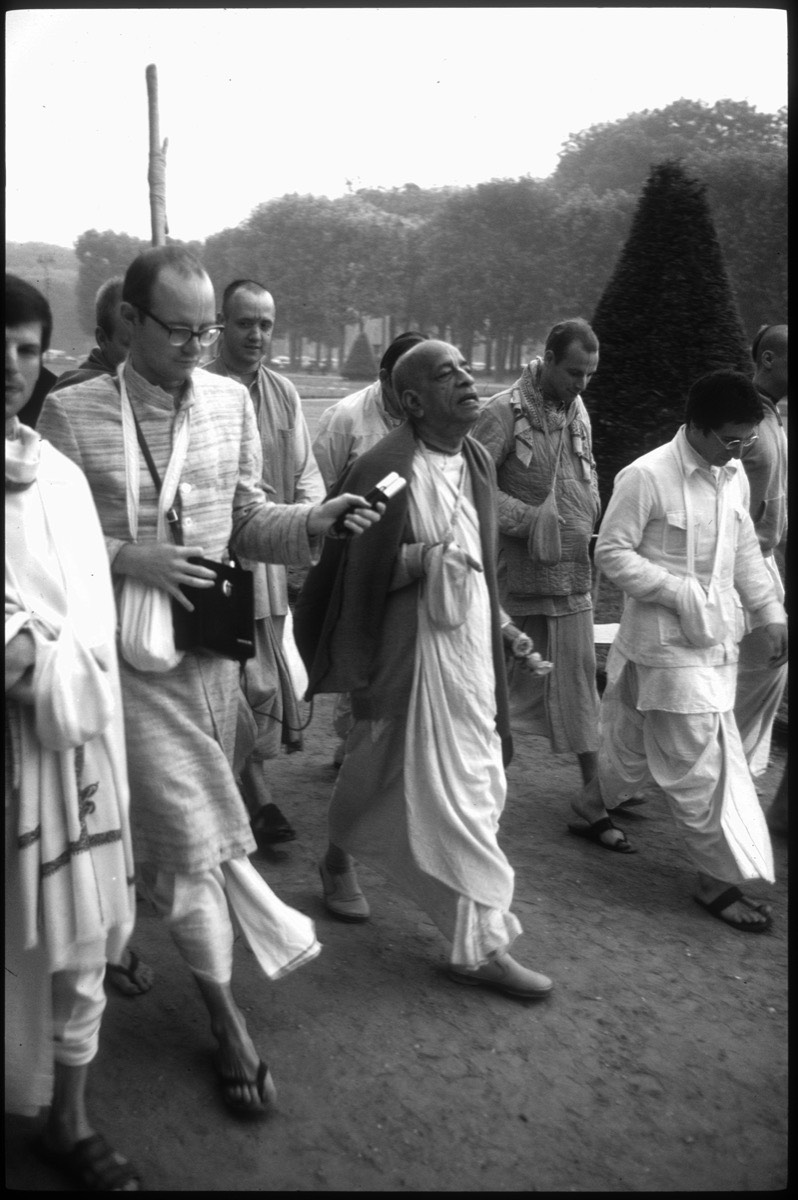 Prabhupāda: Every father loves his son. Therefore this is contradictory. He is blind, but he has called… [microphone rattling] ¶

Surendra Kumar Saigal: He has no locana. ¶

Prabhupāda: And he has called padma-locana. Similarly, this harijana movement is a farce because they remain the cāmāra and bhaṅgis, and still they are called harijana. The same thing. No locana, but padma-locana. Everyone has got right. You can become the most advanced devotee. There is no hindrance. But they must be trained up as harijana. Not that artificially you simply rubberstamp harijana. Therefore that movement is failure. We have no objection to make anyone… Kṛṣṇa says, māṁ hi pārtha vyapāśritya ye ‘pi syuḥ pāpa-yonayaḥ [Bg. 9.32]plugin-autotooltip__small plugin-autotooltip_bigBhagavad-gītā As It Is 9.32

O son of Pṛthā, those who take shelter in Me, though they be of lower birth—women, vaiśyas [merchants], as well as śūdras [workers]—can approach the supreme destination.. Pāpa-yoni, lower class. Janma-aiśvarya-śruta-śrī [SB 1.8.26]plugin-autotooltip__small plugin-autotooltip_bigŚrīmad Bhāgavatam 1.8.26

My Lord, Your Lordship can easily be approached, but only by those who are materially exhausted. One who is on the path of [material] progress, trying to improve himself with respectable parentage, great opulence, high education and bodily beauty, cannot approach You with sincere feeling., these four things: to take birth in high-class family, janma; aiśvarya, to become very rich; and śruta, to become very learned scholar; and śrī, beautiful. These four things are there whose background is pious life. Otherwise, not possible. Janmaiśvarya-śruta-śrī. ¶

So those who are just the opposite—means not born in very high class family, not… They say “accident.” No, it is not accident. According to śāstra, karmaṇā daiva-netreṇa [SB 3.31.1]plugin-autotooltip__small plugin-autotooltip_bigŚrīmad Bhāgavatam 3.31.1

The Personality of Godhead said: Under the supervision of the Supreme Lord and according to the result of his work, the living entity, the soul, is made to enter into the womb of a woman through the particle of male semen to assume a particular type of body., there is superior examination. Yamarāja is there. Now, this man is now dead, this soul is now changing body. What kind of body he’ll get next? That is judged by the superior authority. Just like in the office a person is promoted. So his record is examined, how he has worked honestly to the interest of the establishment. All this consideration. Then he’s given, what is called, increment… ¶

Prabhupāda: …of salary, or promotion to higher post. This is common sense. So it is not accident. A man is born from the very beginning a rich man’s son. That does not mean that it is accident. Daiva-netreṇa. By a superior arrangement he is given the chance to take birth in a aristocratic family or rich family or educated family or in a beautiful family. There is. But this is, so far it is concerned, it is body, and our movement, the Kṛṣṇa consciousness movement, is not of the body. Body is superfluous. It is spiritual movement. Kṛṣṇa therefore begins, asmin dehe. Dehī. This body is external. Just like dress. We are having this dress. I am not this dress; I am within the dress. Similarly, the spirit soul is within this body, and spiritual movement means about that spirit soul, not of this body. So that spirit soul is completely different from this body and… Just like a gentleman is gentleman. One may have a different type of dress. Not that everyone is expected of the same dress. But within the dress, a gentleman is gentleman. Similarly, although there are so many varieties of bodies, within the body the soul is pure part and parcel of Kṛṣṇa. ¶

The supreme occupation [dharma] for all humanity is that by which men can attain to loving devotional service unto the transcendent Lord. Such devotional service must be unmotivated and uninterrupted to completely satisfy the self.. That verse I was speaking yesterday, that without any cause, without any impediments, the soul can be raised by the process. Kṛṣṇa says, māṁ hi pārtha vyapāśritya ye ‘pi syuḥ pāpa-yonayaḥ [Bg. 9.32]plugin-autotooltip__small plugin-autotooltip_bigBhagavad-gītā As It Is 9.32

O son of Pṛthā, those who take shelter in Me, though they be of lower birth—women, vaiśyas [merchants], as well as śūdras [workers]—can approach the supreme destination.. Never mind one is born in low class family, poor, ugly, uneducated family. It doesn’t matter. But he can be raised. What is the process? Māṁ hi pārtha vyapāśritya: “One has to take shelter of Me.” That is Kṛṣṇa conscious movement. We are giving equal chance everyone. It doesn’t matter what he is. Kṛṣṇa says, māṁ hi pārtha vyapāśritya ye ‘pi syuḥ pāpa-yonayaḥ. Pāpa-yoni means low class, poor, uneducated, ugly, no education. That is pāpa-yoni. So they can be raised. Kṛṣṇa says. How? Māṁ hi pārtha vyapāśritya: if he is engaged in Kṛṣṇa consciousness. ¶

Therefore it is the topmost welfare activities in the human society. Anyone can be raised. There are different grades of life all over the world. Some are black, some are white, some are ugly, some are poor. Varieties. Some are trees, some are plants, some are aquatics, some are birds, beasts, insects. Different varieties of life, 8,400,000. Some of them demigods: Brahmā, Indra, Candra. Very, very powerful. Just like this sun, that is also a planet, and the chief person is the sun-god, Vivasvān. We get all this information. There is. These rascals, they do not know what are these planets, what are the arrangement. They are exactly like this planet. Just like here also, we have got president. It is expected, one president or one king in one planet. That was formerly. On this planet there was one king: the Pāṇḍavas, up to Mahārāja Parīkṣit, five thousand years ago. One king of the whole world. One kingdom, one ruling, one culture, Vedic culture. Gradually we’re losing… The culture is lost, and anyone is doing as he likes. No king, no ruling. Therefore chaotic condition. Otherwise, according to God’s plan, every planet there is one chief person ruling. ¶

So in the sun there is a person. His name is given in the Bhagavad-gītā: imaṁ vivasvate yogaṁ proktavān. His name is Vivasvān. And his son is Vaivasvata Manu. Vivasvān manave prāha. These things are there. And his son, Ikṣvāku. And from Ikṣvāku, the kṣatriya-vaṁśa… In India still, the kṣatriyas are known, two dynasties: one from sun, one from the moon. Candra-vaṁśa, Sūrya-vaṁśa. Still, they are. So the kṣatriyas are coming…. One dynasty is coming from the sun, another… So moon is not desert. These are simply rascals. They do not know anything. And rascals believe that the moon is desert, and the sun is desert; only this planet is full of varieties and beauty. No. We have to take lessons from the śāstras. ¶

So anyone can be raised to the highest platform. Caṇḍālo ‘pi dvija-śreṣṭho hari-bhakti-parāyaṇa.[?] Even one is born as caṇḍāla… Caṇḍāla means less than the śūdras. The dog-eaters. Caṇḍālas. Śva-paca. They are called śva-paca. Śva means dog, and paca means cooker. One who cooks the… There are still so many. In Korea, in China, in Hong Kong, they eat dogs. ¶

Surendra Kumar: They consider it a delicacy. I had a German priest staying with me last year, and he was telling me that he had wonderful soup. And when he found out what was the soup, he said, “Well, didn’t you see the puppy who was going about this morning? It is soup of the same puppy.” ¶

Prabhupāda: In Hong Kong. Yes. In Hong Kong you won’t find street dogs. They’ll eat them. So in India also there are dog-eaters. In Assam you’ll find. They make kukura-piṭhā. Kukura-piṭhā means that first of all the dog is given to eat some rice preparation with gur. And pushing, pushing. When he dies, then it is roasted. Then that is very good food. [laughter] Kukura-piṭhā. The Assamese, they eat. There are different nations. Śva-paca, this word is there in the Bhagavad-gītā: vidyā-vinaya-sampanne brāhmaṇe gavi hastini śuni caiva śva-pāke ca [Bg. 5.18]plugin-autotooltip__small plugin-autotooltip_bigBhagavad-gītā As It Is 5.18

The humble sage, by virtue of true knowledge, sees with equal vision a learned and gentle brāhmaṇa, a cow, an elephant, a dog and a dog-eater [outcaste] .. This śva-pāke means this caṇḍāla. One who eats a dog. Śva-pāke ca paṇḍitāḥ sama-darśinaḥ. ¶

I was questioned by some gentleman sometimes in 1940. He charged that the Vaiṣṇava, “This Vaiṣṇava means a lazy fellow.” He said like that. [laughs] So I said, “You have never seen a Vaiṣṇava.” I told him, “You have never seen a Vaiṣṇava.” “No, I have seen these Vaiṣṇavas. They do not do anything, and taking mālā and pretending to be very highly elevated, and sleep and snore.” That’s… “You have seen… But you have not seen. You might have seen these pseudo-Vaiṣṇavas, but real Vaiṣṇava you have not seen.” “What is that real Vaiṣṇava?” And I said that in India there were two big wars. One war was the Rāma-Rāvaṇa, and another war Kurukṣetra. So in these two wars, the hero is Vaiṣṇava. One is Hanumān and another is Arjuna. Have you seen them? Have you heard about them? Are they lazy fellows? Hanumān is Vaiṣṇava. He could raise one mountain and jump over the sea and set fire in the very beautiful state of Rāvaṇa. This is Vaiṣṇava. This is Vaiṣṇava. And Arjuna, he was in the beginning hesitating that “My cousin-brothers, the other side…” [break] [end] ¶