Pradyumna: Translation: “Sūta Gosvāmī thus addressed the ṛṣis headed by Śaunaka: Now I shall begin the transcendental narration of the Lord Śrī Kṛṣṇa and topics of the birth, activities and deliverance of King Parīkṣit, the sage amongst kings, as well as topics of the renunciation of the worldly order by the sons of Pāṇḍu. 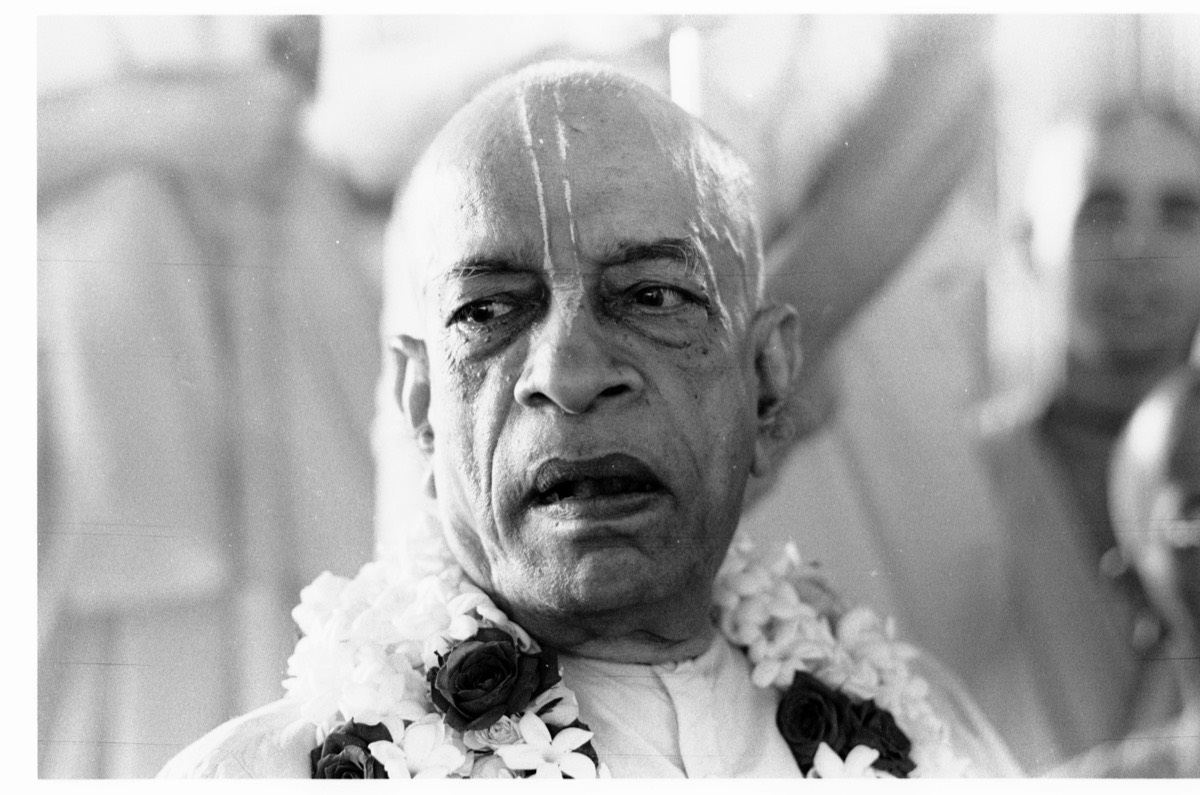 Pradyumna: Translation: “Sūta Gosvāmī thus addressed the ṛṣis headed by Śaunaka: Now I shall begin the transcendental narration of the Lord Śrī Kṛṣṇa and topics of the birth, activities and deliverance of King Parīkṣit, the sage amongst kings, as well as topics of the renunciation of the worldly order by the sons of Pāṇḍu.” ¶

Prabhupāda: Hmm. [aside:] The flies are disturbing. How we are… ¶

Sūta Gosvāmī thus addressed the ṛṣis headed by Śaunaka: Now I shall begin the transcendental narration of the Lord Śrī Kṛṣṇa and topics of the birth, activities and deliverance of King Parīkṣit, the sage amongst kings, as well as topics of the renunciation of the worldly order by the sons of Pāṇḍu.

This Śrīmad-Bhāgavatam is another Purāṇa, history. We have already explained. So sometimes a class of devotees known as sahajiyā, they say that “What we have got to do with the narration of Kurukṣetra battle?” They immediately jump to the kṛṣṇa-līlā, directly with the gopīs. And Kṛṣṇa’s activities in other field, they think it is useless. But that is not the fact. Anywhere Kṛṣṇa is acting, that is transcendental. The battlefield of Kurukṣetra, historical references, description, so superficially it appears that what a devotee has got to do with this battlefield? But battlefield or no battlefield, wherever there is Kṛṣṇa, that is transcendental. This has to be understood. Otherwise, Śukadeva Gosvāmī, why he should indulge in describing how Uttarā’s pregnancy was saved by Kṛṣṇa, how the brahmāstra was thrown by Aśvatthāmā? So Śukadeva Gosvāmī is liberated person. Why he should indulge in these material things? No. Those who are advanced, they know that Kṛṣṇa’s dancing with the gopīs, that līlā and Kṛṣṇa’s playing as the leader of the battlefield of Kurukṣetra, is the same. It is all transcendental. One should not make any distinction between the two. Saṁsthāṁ ca pāṇḍu-putrāṇāṁ vakṣye kṛṣṇa-kathodayam. Pāṇḍu-putrāṇām, the pāṇḍu-putras, or the Pāṇḍavas, son of Pāṇḍu, they’re all devotees. Even their political affairs, because there is connection with Kṛṣṇa, it is kṛṣṇa-kathā. Those who are with poor fund of knowledge… ¶

Kirāta, Hūṇa, Āndhra, Pulinda, Pulkaśa, Ābhīra, Śumbha, Yavana, members of the Khasa races and even others addicted to sinful acts can be purified by taking shelter of the devotees of the Lord, due to His being the supreme power. I beg to offer my respectful obeisances unto Him.. That is the statement given by Śukadeva Gosvāmī. How the caṇḍālas can become purified? The example I have already stated. Then at the end, Śukadeva Gosvāmī says, prabhaviṣṇave namaḥ. This is the supreme transcendental power of Viṣṇu. He can do. Sometimes they say that unless the body is changed, how a caṇḍāla can become purified? Yes, body is changing. Because we do not know how the body is changing… Kṛṣṇa says in the Bhagavad-gītā, tathā dehāntara-prāptiḥ. Dehāntara-prāptiḥ. Dehino ‘smin yathā dehe kaumāraṁ yauvanaṁ jarā tathā [Bg. 2.13]plugin-autotooltip__small plugin-autotooltip_bigBhagavad-gītā 2.13

As the embodied soul continually passes, in this body, from boyhood to youth to old age, the soul similarly passes into another body at death. The self-realized soul is not bewildered by such a change., like that. Tathā means “like that.” Dehāntara-prāptiḥ. So these are dehāntara. Dehino ‘smin yathā dehe kaumāraṁ yauvanaṁ jarā. This is dehāntara. Every moment we are changing our body. This is dehāntara. Kṛṣṇa says, the greatest authority. How you can say that there is no dehāntara? Yes, dehāntara. Suppose in my childhood I am born in a caṇḍāla family, but if by initiation, by taking shelter of a pure devotee, I become initiated, so dehāntara is there, going on. So if I take initiation seriously, so in the next dehāntara… Suppose yesterday I was a caṇḍāla. Now by this time there is dehāntara, and if I am purified by initiation… So this argument… Dehāntara is already there. Scientifically, in modern understanding, and on the authority of Kṛṣṇa’s statement, dehāntara is going on. Not that somebody was European or… We take Europeans as mlecchas, yavanas. Yes, he was yesterday mleccha and yavanas, but he has changed his body, and after changing, if he’s initiated, then dehāntara. Śudhyanti, he’s purified. Śudhyanti. ¶

Therefore we have to learn it from, ¶

Just try to learn the truth by approaching a spiritual master. Inquire from him submissively and render service unto him. The self-realized soul can impart knowledge unto you because he has seen the truth.

Kirāta, Hūṇa, Āndhra, Pulinda, Pulkaśa, Ābhīra, Śumbha, Yavana, members of the Khasa races and even others addicted to sinful acts can be purified by taking shelter of the devotees of the Lord, due to His being the supreme power. I beg to offer my respectful obeisances unto Him., caṇḍāla. Caṇḍālo ‘pi dvija-śreṣṭho hari-bhakti-parāyaṇaḥ. So it is inconceivable by us how a caṇḍāla can be dvija-śreṣṭha, more than a brāhmaṇa. It is inconceivable by me. But when we get a statement of the authorities like Śukadeva Gosvāmī, and above that, Kṛṣṇa… Because the conclusion of Kṛṣṇa and the conclusion of pure devotee like Śukadeva Gosvāmī, they are the same. Just see here. Kṛṣṇa says, māṁ hi pārtha vyapāśritya ye ‘pi syuḥ pāpa-yonayaḥ te ‘pi yānti parāṁ gatim [Bg. 9.32]plugin-autotooltip__small plugin-autotooltip_bigBhagavad-gītā 9.32

O son of Pṛthā, those who take shelter in Me, though they be of lower birth—women, vaiśyas [merchants], as well as śūdras [workers]—can approach the supreme destination.. So unless one is purified, how he can go to parāṁ gatim? And Śukadeva Gosvāmī also says the same thing. Kirāta-hūṇāndhra. Pāpa-yoni. They are pāpa-yoni. Śudhyanti prabhaviṣṇave namaḥ. Simply we have to go through the process; otherwise everything is possible. That is the omnipotency of Kṛṣṇa. ¶

We use this word “omnipotency,” but we do not know actually what is that omnipotency. Omnipotency means He has got diverse energies. That is omnipotency. And we do not know by which energy He’s acting in a particular case. But this is a fact, that His energy is working. And He says also in the Bhagavad-gītā directly, mayādhyakṣeṇa prakṛtiḥ sūyate sa-carācaram [Bg. 9.10]plugin-autotooltip__small plugin-autotooltip_bigBhagavad-gītā 9.10

This material nature is working under My direction, O son of Kuntī, and it is producing all moving and unmoving beings. By its rule this manifestation is created and annihilated again and again.. Mayādhyakṣeṇa, “Under My supervision prakṛti is acting.” So how prakṛti is directed, how Kṛṣṇa is directing prakṛti to make a nice flower… Just like here, they’re painting flower on the wall. It takes so much time, so much arrangement. Still, it is not as good as a natural flower. Here you have painted one rose flower, and here are roses. There is art also, and here is art also. Without art, without artistic sense, how this nice thing, beautiful thing, can come in? You’ll find a beautiful flower bloom in a plant, you appreciate it. And don’t think, as the rascal says, “By nature it has come automatically.” No. The same energy as you are taking—you are applying your energy to paint a flower on the wall with your paints and brushes—but Kṛṣṇa is also doing that, but His energy is so inconceivable that we cannot see how He’s working. But He’s working. Otherwise why Kṛṣṇa says, mayādhyakṣeṇa prakṛtiḥ [Bg. 9.10]plugin-autotooltip__small plugin-autotooltip_bigBhagavad-gītā 9.10

It is confirmed in the Brahma-saṁhitā, ¶

Indeed, the Personality of Godhead forgot Himself in the course of His transcendental pastimes, but His internal potency [līlā-śakti], knowing the intentions of the Lord, made all arrangements.. Automatically, immediately. There are so many machines we have, just like the computer. There is machine working, but it is so minute that simply by pushing one button, so many things immediately done. This is a material machine, manufactured by a human being. And how much perfect the machine of Kṛṣṇa will be, just imagine. ¶

"The mahā-bhāgavata, the advanced devotee, certainly sees everything mobile and immobile, but he does not exactly see their forms. Rather, everywhere he immediately sees manifest the form of the Supreme Lord."

One has to become advanced devotee to understand how Kṛṣṇa’s direction is going on. They can understand. Don’t think that things are taking place automatically. Therefore even in adverse condition a devotee does not see that “This thing is happening without direction of Kṛṣṇa.” Even if he is in an adverse condition, he does not feel any pain, because he knows that “This adverse condition is also under the direction of Kṛṣṇa. So I am fully surrendered to Kṛṣṇa. Why I shall take this adverse position as not mercy of Kṛṣṇa? It is also mercy of Kṛṣṇa.” Tat te ‘nukampāṁ su-samīkṣamāṇo bhuñjāna evātma-kṛtaṁ vipākam [SB 10.14.8]. A devotee is not disturbed by adverse condition. He takes that this is a gift of Kṛṣṇa. Tat te anukampām. “It is Kṛṣṇa’s mercy. Although I am put into difficulty, it is Kṛṣṇa’s mercy.” ¶

So anyone who takes in that way, mukti-pade sa daya-bhāk: his going back to home, back to Godhead, is guaranteed. Because he takes everything as Kṛṣṇa’s mercy. Just like Prahlāda Mahārāja. Prahlāda Mahārāja was so much chastised by his father. You know how he was put into difficulty in so many ways. But he was taking, “This is Kṛṣṇa’s mercy.” He did not take otherwise. So in this way, wherever… Everywhere there is Kṛṣṇa’s hand, so what to speak of this battlefield or any other thing. So we should not take otherwise, that “This the best part and this is the lowest part.” No. Wherever there is Kṛṣṇa directly. Kṛṣṇa is everywhere, but we cannot see. But at least in Mahābhārata, in Śrīmad-Bhāgavatam, in Kṛṣṇa’s dealing with the Pāṇḍavas, the Kṛṣṇa’s hand is there. That is Kṛṣṇa’s līlā. [break] …it is not like that. One who is advanced, one who is actually in knowledge, they will take kṛṣṇa-kathodayam. Wherever Kṛṣṇa’s kathā is there, it is as good as any other. That is the way of… ¶