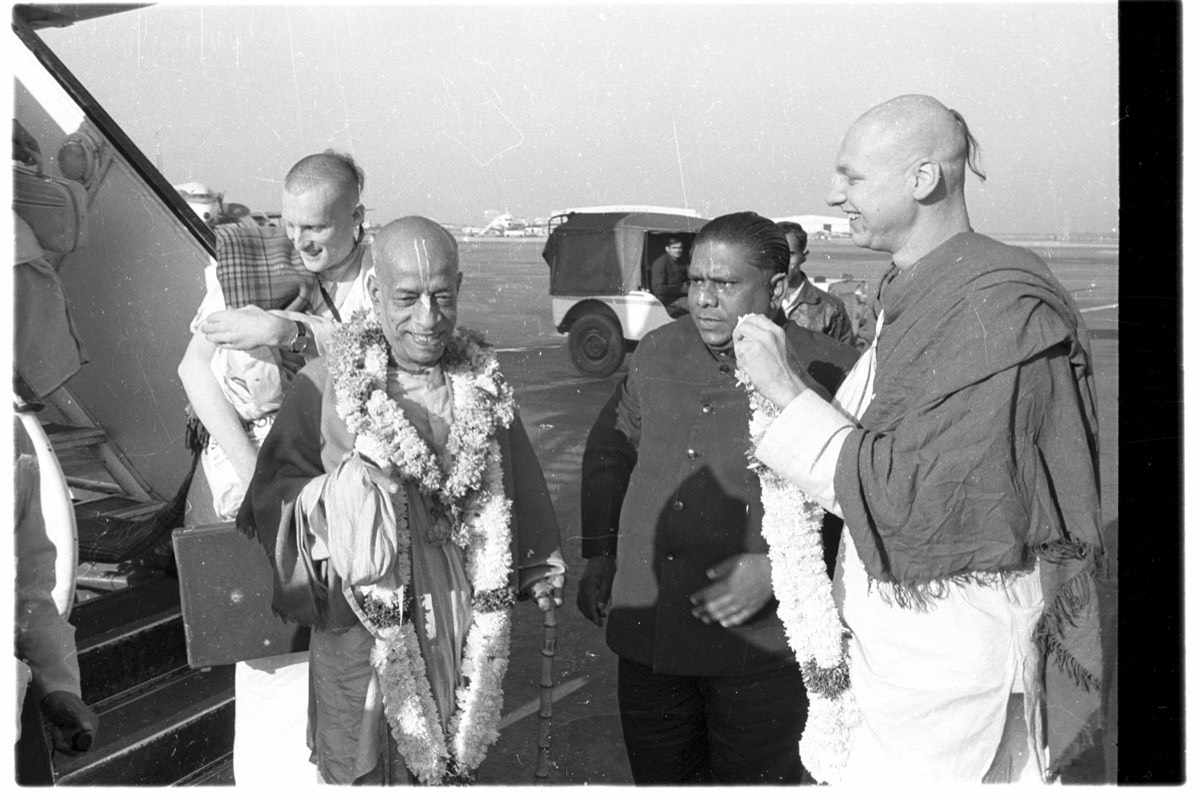 Prabhupāda: Yes. We are coming from Detroit? ¶

Prabhupāda: There are so many factories for four-wheel vehicles, and there is no factory to educate man to the right path. Perhaps… This is our little attempt, this Kṛṣṇa consciousness movement, how to educate to the right path. We are not getting any help, either from the authority… In our own way, as far as possible, we are doing. When people will be educated they will be able to understand who is guru, who is not guru. We can say, but who is going to accept? We say always that they are all rascals, but who will accept our statement? And the state, there had been a department to see what is the qualification of guru, then immediately they would have taken steps. Just like in Kṛṣṇa’s time one man falsely presented himself as God, immediately his head was cut off. Pauṇḍraka. So the state must be very strong to punish the miscreant. But there is no such state. ¶

Prabhupāda: So it is the duty of the Christians. But they are also… What can I say? They are passing resolution according to the time, changing the instruction of Bible. How they can be fixed-up? Our standard is Bhagavad-gītā As It Is. We accept guru as representative of Kṛṣṇa, the Supreme Personality of Godhead. If he speaks what Kṛṣṇa has spoken, then he is guru. Similarly in Christianity, if they actually take care that whether one is speaking according to the Ten Commandments, if he is living according to the rules and regulations of the Ten Commandments, then he is guru. Now why people accept them? Because they are in ignorance; they do not know who is real and who is fake. But the standard is there. Take for example in the Bible, it is said, “Thou shall not kill.” But everyone is killing. Killing is the business of the Christians. They are maintaining big, big slaughterhouse. We are maintaining cows here, and there are others, they are maintaining cows for slaughtering. Why? In these Commandments it is clearly said that “Thou shall not kill.” How they will detect? If they are violating themselves the laws, how they will punish the lawbreaker? “Physician, heal thyself.” The physician himself is diseased, and he’s going to treat other patients. ¶

Mike Darby: So they all just continue in a circle to break their own laws. ¶

Prabhupāda: What can be done? ¶

Mike Darby: Would it help if someone took the Bible and wrote a Vaiṣṇava purport, or tried to simplify it so that people could understand it? The language is difficult for the common man now to understand. ¶

Prabhupāda: That we are spreading. Kṛṣṇa consciousness movement is that you act what Kṛṣṇa, or God, says, that’s all. In our Bhagavad-gītā the guru’s description is there, who is guru. Read the Fourth Chapter. Our this all literature, simply guru and disciple: one is instructing, and one is hearing. ¶

This supreme science was thus received through the chain of disciplic succession, and the saintly kings understood it in that way. But in course of time the succession was broken, and therefore the science as it is appears to be lost.

“This supreme science was thus received through the chain of disciplic succession, and the saintly kings understood it in that way. But in course of time the succession was broken, and therefore the science as it is appears to be lost.” ¶

Prabhupāda: The succession was broken. So similarly, Christ says something. So if that commandment is received by succession, then it goes nicely. But if you break it according to your necessity, then where is the authority? ¶

Mike Darby: None. No use if you have the rules there, the law is there, to be passed, and someone forgets them. This is sinful. ¶

Prabhupāda: No, they are passing resolution. Suppose there is a law of the state, ordinary, say, “Keep to the right,” and in this village all members, they assemble together and pass a resolution that “No, keep to the left.” Will it be accepted? Even they pass resolution, the state will not accept it. Unless it is… Of course, there should be no change. By anything spoken by God or His son or His representative, that cannot be changed. It is not that Christ said two thousand years ago, “Thou shall not kill,” now it can be changed. That is rascaldom. They are doing that. If you do that, then, as it is said here, then it becomes lost. Then there is no meaning. If we take the instruction of God and His representative as temporary, then he is not representative, He is not God. Whatever is spoken by God and His representative, that is eternal. You cannot change by your whims. But that is going on. We…, I do not wish to discuss very much, but that is actually going on. As people they, by votes in the Parliament, they pass any nonsense thing, so they want to do that in the case of Bible also. Then where is the authority of Bible? If Christ says that “Thou shall not kill,” and if people, say ten thousand people in a meeting, pass resolution, “No, this is wrong,” then where is the authority of Bible? Then you become authority. ¶

Prabhupāda: Yes. God has created everything. Just like father, son and the mother. Mother gives birth to the son when the mother is impregnated by the father. This is the law, everyone knows. Now you can see that so many trees are coming from earth. Is it not? Trees and plants and grass. And we eat them, we live. Therefore the earth is mother, and the children are so many. The plants are about two million types of plants. Jalajā nava lakṣāṇi sthāvarā lakṣa-viṁśati [Padma Purāṇa]. Then there are insects, reptiles, then beasts, then man. In this way there are so many living entities. The living entities are produced from the earth. The earth is the mother and the living entities are the sons. Then where is the father? This simple thing, why do they not inquire, “Who is the father?” ¶

Prabhupāda: Yes, Kṛṣṇa, God, or whatever you speak, there must be father. You cannot say that these children, the offsprings, are coming automatically. Then you are a fool if you say like that. That is explained in the Bhagavad-gītā. [aside:] Find out this verse: ¶

It should be understood that all species of life, O son of Kuntī, are made possible by birth in this material nature, and that I am the seed-giving father.

It should be understood that all species of life, O son of Kuntī, are made possible by birth in this material nature, and that I am the seed-giving father.

“It should be understood that all species of life, O son of Kuntī, are made possible by birth in this material nature, and that I am the seed-giving father.” ¶

Prabhupāda: So how can I deny God? How can you deny your father? If you say, “I’ve not seen my father,” that does not mean that you have no father. Ask your mother, she will reply, “Yes, you have your father.” So the argument is forwarded, that “We cannot see God; therefore there is no God.” This rascal argument is being forwarded. Because you are speaking, you are existing, there must be father. That is conclusion. Without father, there would have been no possibility of your existence. You are speaking, talking so loudly, “There is no God.” This is going on. “Because I do not see God, therefore there is no God.” ¶

Mike Darby: So many people call themselves Christians; they still try to deny God. ¶

Prabhupāda: Not only Christians, the whole world is now like that. Religion has become a subject matter of laughing. If one is God conscious, religious, he is considered fool number one, not very much advanced. Especially the scientists, the rascal scientists. And they’ll bluff you in so many ways, that “Life is produced from chemical.” And when we challenge them that “You make a little egg with chemicals and put it in the incubator and let life come,” what will be the answer? The so-called scientist who says that life is made by combination of chemicals? Anyone can see the composition of egg—a little white and yellow substance. There are many chemicals, they are all white, and there are many chemicals yellow also. Combine together and put it in the incubator and see whether chicken is coming or not. And still they will assert, write big, big books, that “Life is coming out of chemicals.” And people are accepting this bluff. So it is very precarious condition of the present world. People want to be bluffed, and there are many bluffers. And they are satisfied that “I am bluffed by a big bluffer.” That’s all. This is going on. ¶

Mike Darby: These scientists speak about making life with chemicals, yet none of them have even been able to begin their experiments. They can… ¶

Prabhupāda: I have therefore said, “Make a small egg, then talk of big, big things.” ¶

Mike Darby: They can make one chemical which leaves the life. But not more. ¶

Prabhupāda: Not only that. If you are a sane man, you analyze your body. Now find out where is life. Beginning analysis is the breathing. You take… Now a man is dead. Somebody says, “Now, because his breathing is stopped, therefore he is dead.” So what is this breathing? It is simply a little air. So put some machine, and the air may come and go and give him life. Take anything, breathing, then you take blood, then you take skin, then you take muscle, then you take bone, then take your stool, urine, find out life. Is it possible? Then why do you say that life is combination of chemical? You take this blood, urine and stool, what is called, bone and muscle and air, what is combination, and produce another man. So they are talking this nonsense, and nonsense people are accepting. And they are being paid for, high salary, for talking this nonsense at the cost of the taxpayer. ¶

Mike Darby: They get big profit, and no one else does. ¶

Prabhupāda: And they are going to the moon planet, Mars planet, and bringing some dust. ¶

Mike Darby: They try to keep the people busy by showing them other planets. ¶

Prabhupāda: Yes. But busy means they can show all these bluff busy program to the rascals, not to the sane man. ¶

Mike Darby: Could you tell us a little about your spiritual master’s life? I’ve never heard anything. ¶

Mike Darby: But I have never heard anything of Śrīla Bhaktisiddhānta, and I wondered if you would tell me a little bit about him, if you would. ¶

Prabhupāda: What shall I say? He was my spiritual master, and whatever he taught, we are speaking, that’s all. We don’t talk any nonsense. ¶

Mike Darby: Then that’s all I have to ask you. Thank you for allowing me your time. ¶

Prabhupāda: Thank you for your coming. [end] ¶