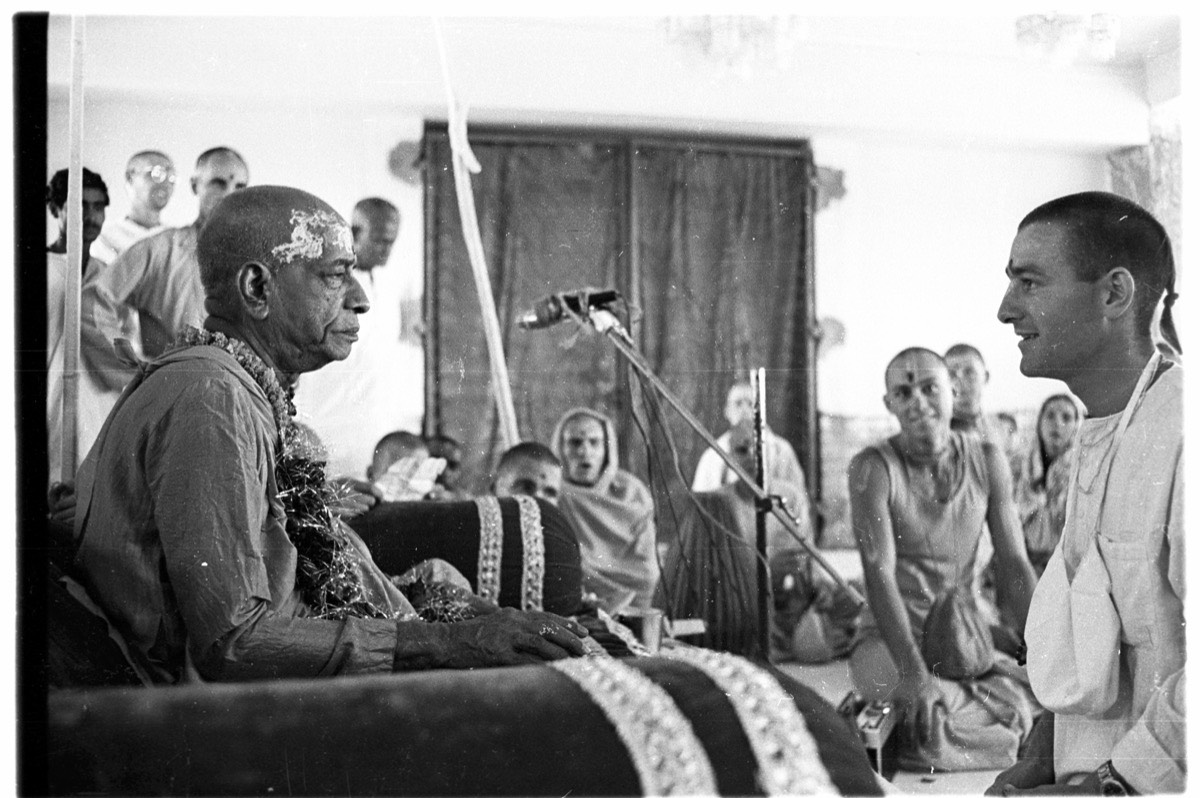 Prabhupāda: …our process is: What Kṛṣṇa says, we believe Kṛṣṇa, because He is the supreme authority. Mattaḥ parataraṁ nānyat kiñcid asti dhanañjaya [Bg. 7.7]plugin-autotooltip__small plugin-autotooltip_bigBhagavad-gītā As It Is 7.7

O conquerer of wealth [Arjuna], there is no Truth superior to Me. Everything rests upon Me, as pearls are strung on a thread.. So Kṛṣṇa is the supreme authority, accepted by all ācāryas. In our India the ācāryas are Rāmānujācārya, Śaṅkarācārya, Madhvācārya. They all accepted Kṛṣṇa, the Supreme. Formerly the ācāryas like Vyāsadeva, Śukadeva Gosvāmī, Nārada…; later, Caitanya Mahāprabhu. So all accept Kṛṣṇa the Supreme Personality of Godhead. Therefore we should accept what Kṛṣṇa said, that. Then you are sound. No question of “my religion,” “your religion.” What Kṛṣṇa said, that is sound. ¶

So Kṛṣṇa says very simple thing. Our real problem is how to get relief from the material world. One may say, “What is the fault of material world?” The fault is that you may arrange… First of all, there is no happiness. But even though you make some arrangement, still, you are not allowed to stay. Suppose you have made very good arrangement: “I have got very nice house, nice car, very nice family, wife and relatives, and business,” just like that. But where is the guarantee that you shall stay here and enjoy? That is the question. Suppose you have arranged everything; but nature will allow? Nobody can check. You cannot say that “I’ve arranged so nicely for my happiness, and why Yamarāja will take it away from me forcibly? Give me some time to set it up.” “No.” This is the problem. So that is the defect in material civilization, so-called material civilization, that if I try to do something with hard labor to make yourself happy, but at any moment the whole thing will be smashed. ¶

Rāvaṇa tried to make a golden city. Eh? He was vanquished. Hiraṇyakaśipu tried; he also was vanquished. Therefore Prahlāda Mahārāja, he refused to take any material benediction. He said, “My Lord, so far material benediction is concerned, I have seen my father was so opulent even the demigods were trembling when he was angry.” So still the principle is there. So, “I have no value of this material civilization. Kindly engage me in Your service.” This was Prahlāda Mahārāja’s statement. Actually that is the [indistinct], how to be engaged in the service of the Supreme Personality of Godhead. ¶

This Hare Kṛṣṇa mantra means that. Hare: “O the energy of the Supreme Lord, Harā.” Hare, Harā. Harā means the energy, Rādhā, Harā, like that. So, Hare, “O mother, the energy of Kṛṣṇa,” and Kṛṣṇa, “O Kṛṣṇa.” Kṛṣṇa is always with his energy, just like Rādhā-Kṛṣṇa. Kṛṣṇa is not alone. The Māyāvāda philosophy is Brahman, impersonal, alone. That is not [indistinct]. Actually, the Absolute Truth is a person. Brahmeti paramātmeti bhagavān iti [SB 1.2.11]plugin-autotooltip__small plugin-autotooltip_bigŚrīmad Bhāgavatam 1.2.11

Learned transcendentalists who know the Absolute Truth call this nondual substance Brahman, Paramātmā or Bhagavān., Bhagavān. And without any opulence? So they were practically [indistinct]. Suppose a man is very rich, all-powerful, but he has no faculties, so he’s not happy, cannot be. So there are many practical examples. But “all opulence” means He must have multi-energies: parāsya śaktir vividhaiva śruyate [Cc. Madhya 13.65]plugin-autotooltip__small plugin-autotooltip_bigŚrī Caitanya-caritāmṛta, Madhya-līlā 13.65

Indeed, the Personality of Godhead forgot Himself in the course of His transcendental pastimes, but His internal potency [līlā-śakti], knowing the intentions of the Lord, made all arrangements.. So this special energy is Śrīmatī Rādhārāṇī, rādhā kṛṣṇa-praṇaya-vikṛtir [Cc. Ādi 1.5]plugin-autotooltip__small plugin-autotooltip_bigŚrī Caitanya-caritāmṛta, Ādi-līlā 1.5

The loving affairs of Śrī Rādhā and Kṛṣṇa are transcendental manifestations of the Lord's internal pleasure-giving potency. Although Rādhā and Kṛṣṇa are one in Their identity, They separated Themselves eternally. Now these two transcendental identities have again united, in the form of Śrī Kṛṣṇa Caitanya. I bow down to Him, who has manifested Himself with the sentiment and complexion of Śrīmatī Rādhārāṇī although He is Kṛṣṇa Himself.. When Kṛṣṇa wants to feel pleasure, then He expands Himself by His pleasure potency, and that is Rādhārāṇī. So, Hare, Kṛṣṇa, [indistinct] he rādhe, he kṛṣṇa, or Hare Kṛṣṇa, it’s the same thing: Hare Kṛṣṇa, Hare Kṛṣṇa, Kṛṣṇa Kṛṣṇa, Hare Hare/ [all join in chanting] Hare Rāma, Hare Rāma, Rāma Rāma, Hare Hare. Rāma means the supreme enjoyer, Rāma; and Kṛṣṇa means the supreme attractive. So the two, three names are there, Rāma and Kṛṣṇa and Harā. So why we are addressing? We are addressing God, “Accept me in Your service.” This is liberation. “O Harā, O Hare, O Kṛṣṇa, O Rādhā, O prema[?], please take me in Your service.” ¶

So actually we are servant of God, every one of us. But instead of serving God, we wanted to serve something else, and the result is that gradually we have come to serve dog. This is our position. Service is there, as we discussed, you can see: when one has no family, he keeps a pet dog to give service. So service is our essential part of life. So we are suggesting, “Please don’t give your service to māyā, illusionary.” Everyone is attempting. Just like here in Detroit there are so many factories and so many servants, they are all engaged in service. The workers, they are engaged in service, and the so-called master, he is also engaged in service to a master to get [indistinct] and opulent cars. So everyone is engaged in service, but everyone is thinking that he is master. This is called illusion. ¶

So our this Hare Kṛṣṇa movement is that one should understand that we have to render service to someone—either to the society, to the family, or to the community, or to the nation, or to the total human society. So [indistinct] keep a dog. So we have to render service. If nobody is there, you shall render service to something else. That is our nature, our constitutional position. But the difficulty is that here in this material world you go on rendering service to somebody or some institution, neither the servant is satisfied nor the master is served. [indistinct] This is the defect of material civilization. Therefore, when you become intelligent, then, when you understand that our constitutional position is to render service to the Supreme Lord, when you come to that understanding… That is not very easy. Bahūnāṁ janmanām ante jñānavān māṁ prapadyate [Bg. 7.19]plugin-autotooltip__small plugin-autotooltip_bigBhagavad-gītā As It Is 7.19

After many births and deaths, he who is actually in knowledge surrenders unto Me, knowing Me to be the cause of all causes and all that is. Such a great soul is very rare.. After many, many births of rendering service here and there, one comes to the conclusion, by knowledge, that “My real position is to render service to the Lord.” Then we become perfectly in knowledge. Bahūnāṁ janmanām ante jñānavān māṁ prapadyate. ¶

So this Kṛṣṇa consciousness movement is an educational propaganda. Don’t take it as a sectarian faith or religion. No. It’s… Religion is there, but don’t misunderstand that just like somebody takes… Religion means a kind if faith, in the dictionary meaning. So faith, some faith one may accept; one may not accept. But you cannot deny from your constitutional position. Your position is to render service. You have to render service. If you don’t render service to Kṛṣṇa, God, then you have to render service to māyā or to the cats and dogs. You have to. So this is an educational propaganda that people may come to his original constitutional position and give service to the Supreme Lord. There is no restriction. Māṁ hi pārtha vyapāśritya ye ‘pi syuḥ pāpa-yonayaḥ. Here the system, in human society, there is restriction: “No, [indistinct].” That is going on perpetually. But so far the service of Kṛṣṇa is concerned, there is no such restriction. ¶

O son of Pṛthā, those who take shelter in Me, though they be of lower birth—women, vaiśyas [merchants], as well as śūdras [workers]—can approach the supreme destination.

Without any restriction, without any hindrance, everyone may join this movement, make his life perfect and go back to home, back to Godhead. ¶