Prabhupāda: This is one [indistinct].

Baradrāj: No, just a sample.

Baradrāj: The total height is forty inches. Kṛṣṇa is twenty and Kāliya is another twenty inches. 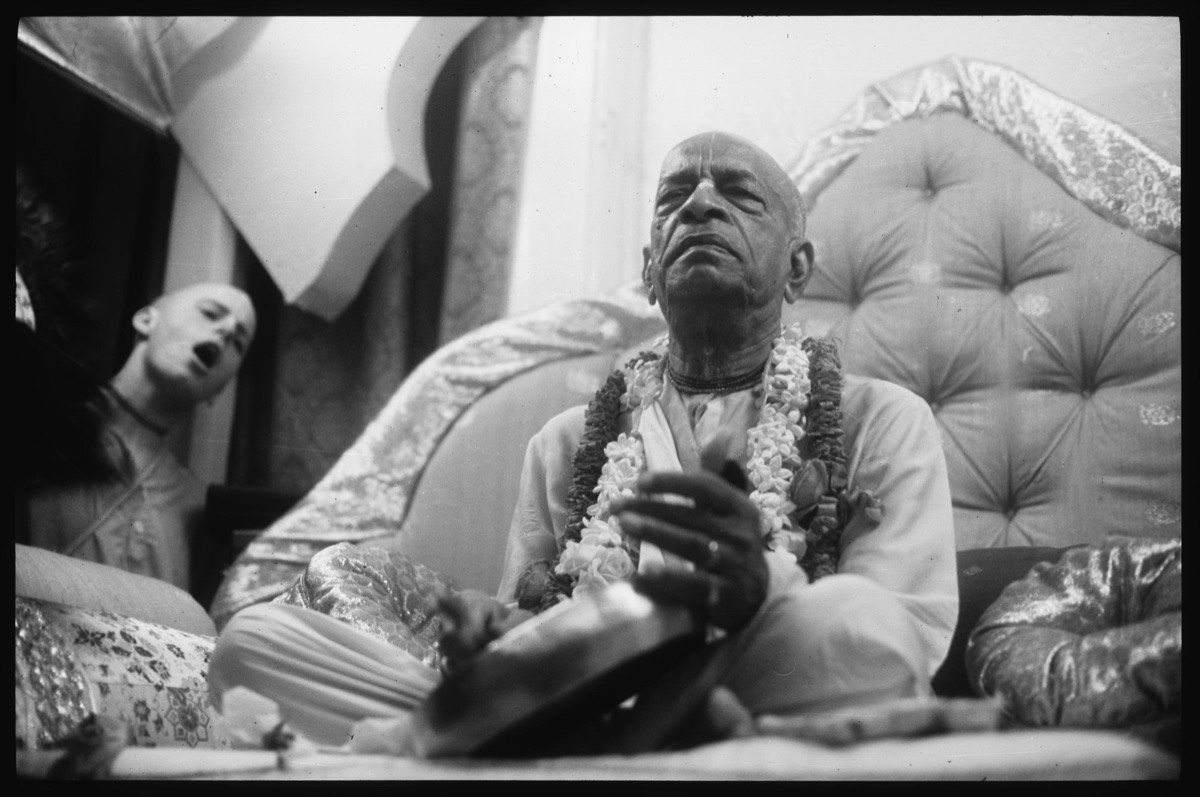 Prabhupāda: This is one [indistinct].  ¶

Baradrāj: No, just a sample. ¶

Baradrāj: The total height is forty inches. Kṛṣṇa is twenty and Kāliya is another twenty inches. ¶

Baradrāj: So I think we could try casting it in bronze. ¶

Prabhupāda: Bronze. Bronze will not be polished? ¶

Baradrāj: It is the American or the Western version of the aṣṭa-dhātu. ¶

Prabhupāda: Oh, that is all right. ¶

Prabhupāda: It will be polished? ¶

Baradrāj: It depends on the quality, grade. Generally they don’t use a very high percentage of brass. ¶

Prabhupāda: Yes, that is the problem. Why not make brass? ¶

Prabhupāda: No, why harder? You can make softer. Metal… ¶

Kīrtanānanda: Gold is softer still. It will be much more brilliant, more beuatiful in brass than bronze. ¶

Prabhupāda: Brass, just like our Rādhā-Kṛṣṇa Deity in Māyāpur, how dazzling. Here also, in Boston. ¶

Baradrāj: Not so much brass casting going on in this country. Mostly bronze casting. ¶

Prabhupāda: Bronze, but it will not be polished. We want polished. ¶

Baradrāj: I have to investigate it. ¶

Hari-śauri: There’s a boy that was in New York who cast some brass Gaura-Nitāi Deities in Australia. They came out very nice. You could talk to him. He might give you some good information. His name is Bhāskara. ¶

Prabhupāda: Brass is best, next to gold or silver. ¶

Baradrāj: But I think the other deities we shall just do in concrete, Rādhā-Kṛṣṇa and Lalitā, Viśākhā. ¶

Baradrāj: They will pay for the casting in Fiji? ¶

Baradrāj: The Indians in Fiji will pay for the casting if we decide to cast in brass here? ¶

Prabhupāda: Anyone will pay. [laughs] Kṛṣṇa will pay. What will be the cost, let me know. It will be paid by somebody. ¶

Baradrāj: I will have to investigate. ¶

Kīrtanānanda: You will have it cast or you will cast it? ¶

Baradrāj: We’ll have it cast here. Actually, one boy is working with me now from Hawaii… ¶

Prabhupāda: But one thing, you can send one copy of this to Vṛndāvana to take casting cost there. They’re also doing. ¶

Baradrāj: Estimate. Perhaps they’ll be able to do it cheaper in India. ¶

Baradrāj: They’ll definitely be able to do it cheaper in India. ¶

Prabhupāda: Then if they can do cheaper, why not cast there? ¶

Prabhupāda: You send to Akṣayānanda. ¶

Prabhupāda: Prahlāda Mahārāja said there is no necessity for endeavoring for economic development. Very difficult to understand this philosophy. ¶

Hari-śauri: People don’t know how they’ll survive if they don’t get money. ¶

Prabhupāda: No. We are actual examples. We are not after economic development, but we are after following Kṛṣṇa’s instructions. ¶

Nalinīkaṇṭha: People criticize us sometimes because they always see… ¶

Prabhupāda: No, what do we care for them? We go on with our own business. ¶

Baradrāj: Actually, they are all envious because they see that without working we are getting such nice facility. ¶

Prabhupāda: No, we are working, but working for Kṛṣṇa. ¶

Prabhupāda: That is the difference. ¶

Rādhā-vallabha: I went to the bank the other day to take out some money for the Press, and I took out a few thousand dollars. I had to take it in small bills. And there were karmīs there, and they were yelling, “They should be thrown out of town!” ¶

Rādhā-vallabha: Yes, and they were very angry, because they don’t make that much money in over two months. ¶

Prabhupāda: The Communists also, they are envious of these capitalists. ¶

Rādhā-vallabha: But the leaders of the Communists are rich. ¶

Rādhā-vallabha: The leaders of the Communists are all rich, and the people don’t notice. ¶

Prabhupāda: Russia, that, what is that, Communist leader? Nikolien? ¶

Prabhupāda: Kruschev. Kruschev. He was making money, therefore he was driven out. His son-in-law, his sons, were being employed, neopolism, what is called? ¶

Hari-śauri: They said he was becoming too friendly with the West, getting too many Western ideas. ¶

Hari-śauri: Kruschev. So they kicked him out. [knock at the door] ¶

Hari-śauri: In England, their whole difficulty with the labor… [door is opened] ¶

Prabhupāda: Let him in. ¶

Rādhā-vallabha: It’s Govinda dāsī. Tell her to come in. ¶

Hari-śauri: But the union problem they have in England, that’s why the whole country now is in disruption, because the labor is always on strike. They did a survey, and they found out that all the major union leaders are Communists. ¶

Hari-śauri: When I was there I remember every month there would be a major strike in the car industry, in the shipping industry. All the major industries there was always a major strike every… And it would completely devastate the economy. ¶

Hṛdayānanda: The foreign businesses no longer have confidence in England, because if they make some order maybe it will not be fulfilled. ¶

Hṛdayānanda: The foreign business no longer has confidence. I heard that England had sold military weapons to Israel, and when Israel was fighting the war they called England, “Immediately send replacements for the weapons.” “No, I’m sorry, we are on strike, there’s no… We cannot send replacements.” So in this way there is no longer confidence in England for business, international business. ¶

Rādhā-vallabha: Now in South America it has been fashionable… There are many, many wealthy businessmen living there. So terrorists will kidnap a businessman and then send a letter to the company in the United States or in that country, stating that “If you do not send us such and such million dollars, we will kill him.” So in this way the terrorists are getting millions of dollars by kidnapping big men. ¶

Hari-śauri: Yes. That’s going on everywhere. There was a… John Paul Getty’s nephew in Italy, he was taken by kidnappers, and they petitioned Getty, “Give us so many millions of dollars, otherwise we’ll kill your nephew.” So he refused. So after a long, long time the nephew was returned somehow or other, and one of the times when they demanded a ransom, they chopped off his right ear and put it in an envelope and sent it through the post: “This is proof that we have your nephew. Now give us money.” And still he refused. And then eventually the boy was returned, minus his ear. ¶

Hṛdayānanda: And you were saying, Prabhupāda, that even when they have so much money they want more. This man is one of the richest men in the world, and for his own family member he would not pay some money to save him. ¶

Prabhupāda: Who was that man? ¶

Hṛdayānanda: Just a few days ago he died. ¶

Rādhā-vallabha: In England. One of the richest men in the world. ¶

Hṛdayānanda: Two of the richest Americans have just died. ¶

Rādhā-vallabha: Howard Hughes. Howard Hughes was considered the richest man in the country, and they found him dying in a hotel room of malnutrition. ¶

Hṛdayānanda: He had become so afraid of death that he would wear a mask over his face to avoid germs, and he would be changing his clothes constantly, and he was living terrified of dying and losing his money. So in this way, in his last several years he became mad, just with fear that he was going to die. ¶

Prabhupāda: What is your next publication? ¶

Hṛdayānanda: In a few days we will be sending to the printer a complete Portuguese Bhagavad-gītā and Spanish Kṛṣṇa book. I think within one week perhaps we will have. In one or two weeks, we will send both to the printer. ¶

Prabhupāda: Where is the editorial department? ¶

Hṛdayānanda: Here. That’s why I’m here. For Spanish and also Portuguese. I just received information that in Caracas they were selling every day one thousand Bhāgavatams. ¶

Prabhupāda: What is the price? ¶

Hṛdayānanda: Each book about two and a half dollars. ¶

Hṛdayānanda: And they have been defeated by Mexico. ¶

Hṛdayānanda: Yes. This month…, last month in Mexico they sent in for the month $23,000, for a month. Now the…, all of South America combined this month has almost defeated Rādhā-Dāmodara. [Prabhupāda laughs] Almost on the same level now, South America. ¶

Prabhupāda: [chuckling] This competition must go on. [laughter] That is tangible. ¶

Prabhupāda: That is a fulfil… [break] [end] ¶