Prabhupāda: God created the soul and the matter also. Has he discussed anything? 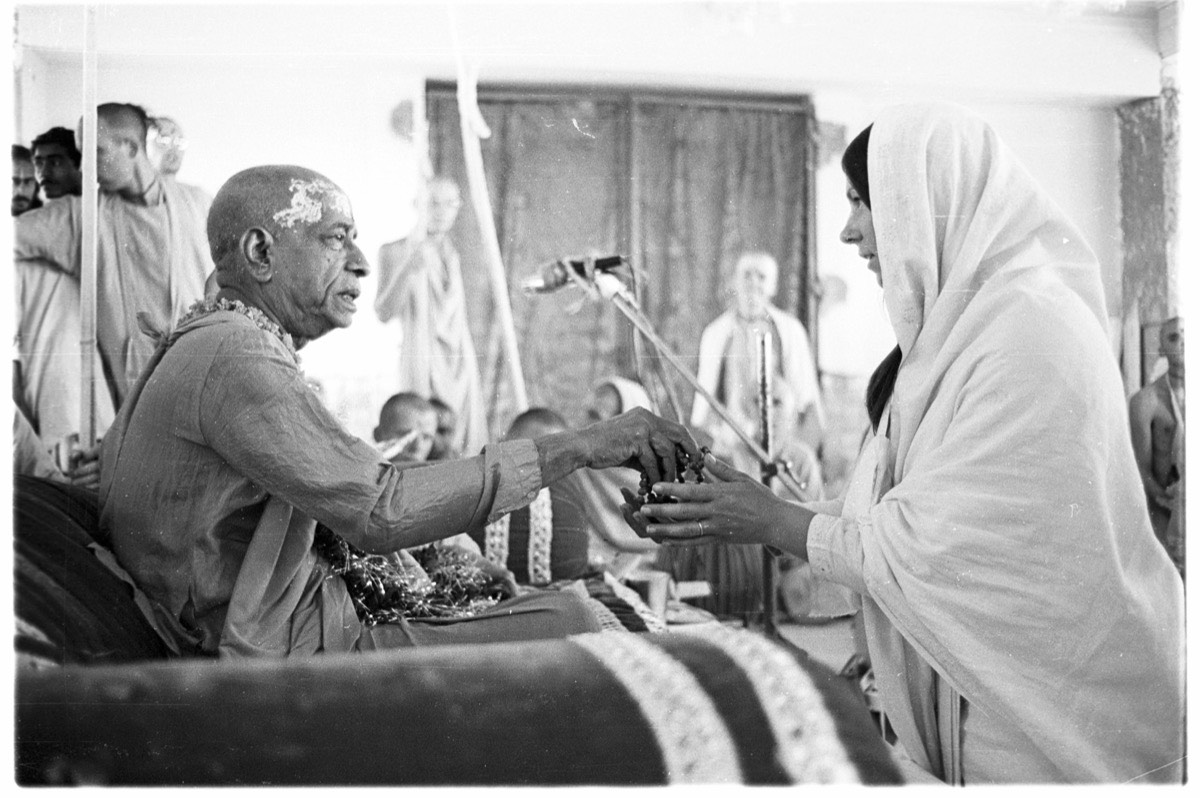 Prabhupāda: God created the soul and the matter also. Has he discussed anything? ¶

Hayagrīva: Well, then, how is the individual soul eternal if it has a beginning? ¶

For the soul there is never birth nor death. Nor, having once been, does he ever cease to be. He is unborn, eternal, ever-existing, undying and primeval. He is not slain when the body is slain.. That is the distinction between matter and soul. ¶

Puṣṭa Kṛṣṇa: They counter that if God is all-powerful, He can do anything. So why not He can create a soul, and that soul can then be eternal from that point? ¶

Puṣṭa Kṛṣṇa: The Christian may argue that God is all-powerful, so God has created the soul, and from that point the soul is eternal. ¶

Puṣṭa Kṛṣṇa: But only from that point, not in the past. ¶

Prabhupāda: Not in the past? ¶

Puṣṭa Kṛṣṇa: Yes, because according to Biblical philosophy you only have one lifetime in this world. ¶

Prabhupāda: Then? Who goes to heaven? ¶

Prabhupāda: Anyone, if he goes to hell or heaven, then why do you say “one life”? Then another life. Otherwise what is the meaning of going to heaven or hell? ¶

Hari-śauri: No. They get one chance to do good or bad, and then finish. ¶

Hari-śauri: They get one chance: do good or bad. Then you either go to heaven or to hell. But you don’t get another chance. ¶

Prabhupāda: But if he goes heaven means there is another life. How do you say “one life”? This is defective philosophy. ¶

Puṣṭa Kṛṣṇa: “But this is what God has said in the Bible; therefore we must accept.” ¶

Puṣṭa Kṛṣṇa: “This is what God has said in the Bible; therefore we must accept.” ¶

Prabhupāda: God, if He says something unreasonable, how it can be accepted? You say “one life.” Then who goes to the next life? That is defective. Why do you not talk back? [break] ¶

The Personality of Godhead said: Under the supervision of the Supreme Lord and according to the result of his work, the living entity, the soul, is made to enter into the womb of a woman through the particle of male semen to assume a particular type of body.. According to one’s activities, pious or impious, he gets the next birth. That is quite reasonable. But they do not believe in karma. When I was student in Scottish Churches College, so we had to attend class, half an hour, Bible. So the Dr. Urquhart, he did… The argument was: “So if karma is there and I am suffering for my karma, who is the witness?” But because they do not know that the witness is God. ¶

Prabhupāda: Yes, he asked that question, philosopher. [break] Paramātmā… They say “Holy Ghost.” What is that Holy Ghost? ¶

Puṣṭa Kṛṣṇa: The Holy Ghost is supposed to give knowledge to persons who have embraced the teaching. ¶

Prabhupāda: Therefore He is seeing what you are doing. So according to your action, the Holy Ghost gives you another birth. [break] …sarva-bhūtānāṁ hṛd-deśe arjuna tiṣṭhati. [break] …dictating everyone’s heart, and He is observing. Bhrāmayan sarva-bhūtāni yantrārūḍhāni māyayā [Bg. 18.61]plugin-autotooltip__small plugin-autotooltip_bigBhagavad-gītā 18.61

The Supreme Lord is situated in everyone's heart, O Arjuna, and is directing the wanderings of all living entities, who are seated as on a machine, made of the material energy.. [break] ¶

Puṣṭa Kṛṣṇa: …contends that if a person does not become fully aware in this lifetime of God, then they don’t have another chance, and they are condemned to hell for eternity. ¶

Prabhupāda: The hell or heaven doesn’t matter. The next life is there. How you say “one life”? That is defective theory. Therefore this philosophy cannot be accepted. Anything which is defective is not to be accepted. ¶

Prabhupāda: Yes. [break] …is rejected. That is Vedic process. ¶

Hari-śauri: Actually, there’s so many different understandings that the Christians have of the same thing. They all have different type of philosophy. ¶

Hayagrīva: This is the… All of this evolved from the Church fathers. ¶

Prabhupāda: That is all defective, unscrupulous. ¶

Rādhā-vallabha: [break] …come up to us on saṅkīrtana, and they are smoking a cigarette, and they say, “Do you accept Jesus Christ?” ¶

Rādhā-vallabha: They say, “You cannot be successful unless you accept Jesus Christ like us.” But they were smoking. ¶

Prabhupāda: We accept. Rather, you do not accept. Jesus Christ said, “Thou shall not kill.” We strictly observe that, but you kill. You are not a Christian. ¶

Hari-śauri: “But that’s just an ideal, the Ten Commandments. You’re not expected to follow.” ¶

Prabhupāda: No, that is your explanation. [laughter] That is your concoction. [break] …take it. As soon as you disobey Ten Commandments, you are not a Christian. You are heathen. [break] And the thing is that religious faith should not be discussed on philosophy, because everyone has got some…, his own concocted faith. That is not philosophy. Faith is different. “I believe,” “You believe,” “I do not believe”—that is not philosophy. [break] …philosophy in Bhagavad-gītā that asmin dehe… Dehino ‘smin yathā dehe [Bg. 2.13]plugin-autotooltip__small plugin-autotooltip_bigBhagavad-gītā 2.13

As the embodied soul continually passes, in this body, from boyhood to youth to old age, the soul similarly passes into another body at death. The self-realized soul is not bewildered by such a change., there is soul. This is philosophy. Religion without philosophy is sentiment, and philosophy without religion is mental concoction. So both of them should be combined. Then it is perfect. [break] ¶

Puṣṭa Kṛṣṇa: …can be given, though, that man’s logic is so tiny, pea brain, and God’s logic is so great, so how can actually man discuss the logic of God? ¶

Puṣṭa Kṛṣṇa: The argument is given that God is infinitely great. ¶

Rādhā-vallabha: Jewish people say that you can’t chant the name of God because it is too sacred. ¶

Prabhupāda: Yes, too sacred, that’s… Actually that’s a fact. And those who are too sinful, they cannot chant. [break] …these ten kinds of offenses. [break] ¶

Rādhā-vallabha: …that God has put the world here for us to enjoy, so we will please Him by enjoying it. [break] ¶

Prabhupāda: However, you go at four o’clock to your working place and come at night, ten. Is that enjoyment? ¶

Rādhā-vallabha: But on the weekend we can go to the beach. And we can eat whatever we want. ¶

Prabhupāda: No, no, you can go to hell also. Different thing… ¶

Humility, pridelessness, nonviolence, tolerance, simplicity, approaching a bona fide spiritual master, cleanliness, steadiness and self-control; renunciation of the objects of sense gratification, absence of false ego, the perception of the evil of birth, death, old age and disease; nonattachment to children, wife, home and the rest, and evenmindedness amid pleasant and unpleasant events; constant and unalloyed devotion to Me, resorting to solitary places, detachment from the general mass of people; accepting the importance of self-realization, and philosophical search for the Absolute Truth—all these I thus declare to be knowledge, and what is contrary to these is ignorance.. That is there. If you are suffering from disease, where is enjoyment? Mental discomfort, bodily discomfort. You are taking thrice pills for tranquillity. Is that enjoyment? ¶

Rādhā-vallabha: They say you have to take the good with the bad. ¶

Prabhupāda: This nonsense enjoyment. Fool’s paradise. For keeping the mind in tranquillity he is taking four times pills. For sleeping, he is taking pill. Does he enjoy that? ¶

Rādhā-vallabha: By suffering you can get a deeper appreciation… ¶

Prabhupāda: Then what is enjoyment? Suffer. Then why it is called enjoyment? By suffering you can… [indistinct—much static from here on] ¶

Puṣṭa Kṛṣṇa: They claim that Christ died for them, and do as [indistinct]. And then he walked out [indistinct]. So they think he is very special, because this has not happened to anyone else. And this can happen to everyone who accepts the same… ¶

Prabhupāda: We say nobody dies. What did Christ [indistinct]? …that takes birth never dies. ¶

Prabhupāda: That’s all right. What is the objection? ¶

Rādhā-vallabha: They don’t catch fish for eating. They catch them just to have fun catching the fish. Then they let them go. [break] ¶

Puṣṭa Kṛṣṇa: …Old Testament, there’s a statement that anyone who sees God will die. So how is it possible for anyone to see God and still remain [indistinct] about the experience? ¶

Prabhupāda: “[indistinct] that you live and see Me”? ¶

Puṣṭa Kṛṣṇa: In the Bible it says that… ¶

Prabhupāda: In the Bible it says that God is omnipotent. ¶

Prabhupāda: He can make one so he can see Him. ¶

Puṣṭa Kṛṣṇa: It appears that they have created a philosophy or a dogma to keep people in darkness. ¶

Prabhupāda: Therefore it is better not to discuss. Discussing, waste of time. [break] ¶

Rādhā-vallabha: Patrick says that Hare Kṛṣṇa is the most dangerous organization, and it should be stopped by any means. ¶

Rādhā-vallabha: Ted Patrick. This is the man that convinces devotees to leave the movement. ¶

Rādhā-vallabha: He kidnaps them. In his book he says that Hare Kṛṣṇa movement is very, very dangerous, and he urges everyone to cooperate together to stop this movement. ¶

Puṣṭa Kṛṣṇa: That’s in an advertisement to parents, because he gets money from the parents. The parents give a lot of money because the young people join our movement. ¶

Rādhā-vallabha: He describes how we had one devotee inside a house. Many devotees came and called, chanting “Haribol! Haribol!” He said that it was terrifying. [laughter] He once kidnapped a devotee in Los Angeles while he was on saṅkīrtana, and he was telling him how he was going to deprogram him from Kṛṣṇa consciousness, and this boy said, “It is impossible.” And Patrick said, “I have done so many of these people.” And the boy said, “But this is the first time you’ve tried to do it to a book distributor.” And after some time he just gave up, and the boy left, came back to the temple. [break] ¶