Bhāvānanda: Someone had mentioned that we should start up in Bihar and come down into Bengal.

Prabhupāda: Oh. Do you think if they go to Orissa it will be nice? No? The saṅkīrtana 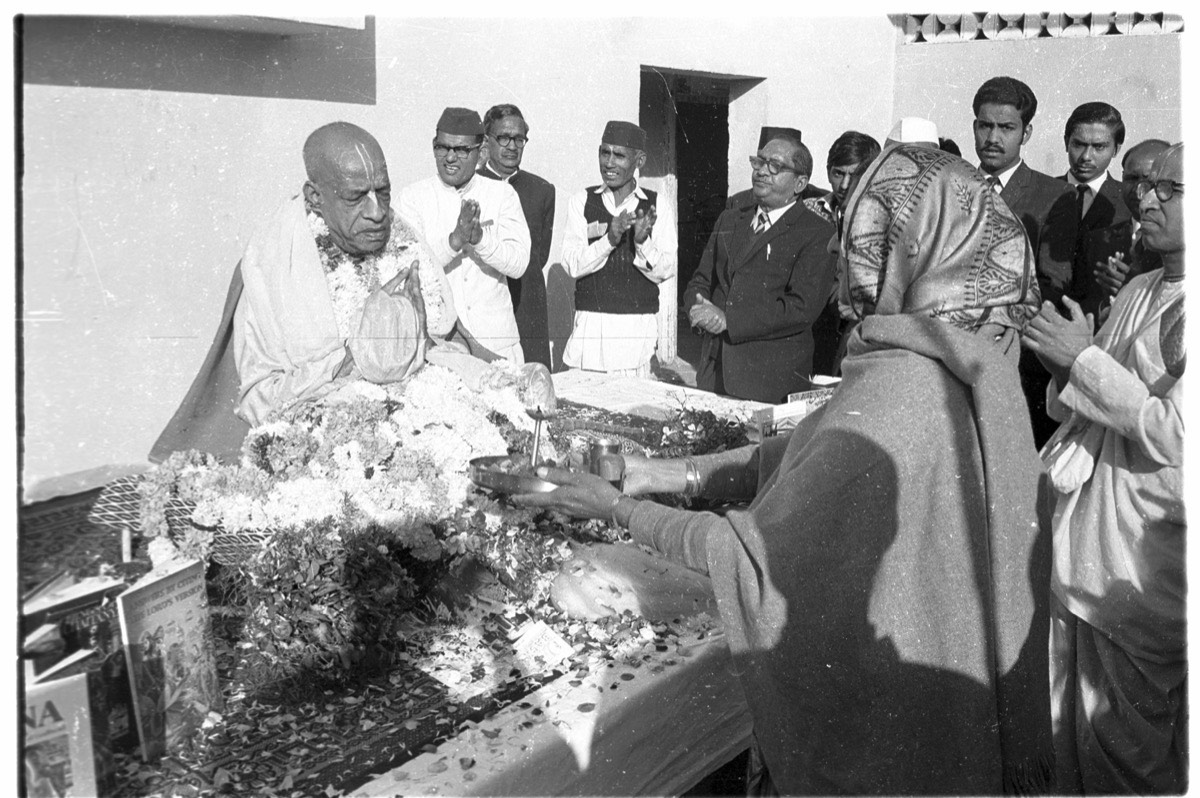 Bhāvānanda: Someone had mentioned that we should start up in Bihar and come down into Bengal. ¶

Prabhupāda: Oh. Do you think if they go to Orissa it will be nice? No? The saṅkīrtana party? ¶

Akṣayānanda: Orissa will be nice? ¶

Prabhupāda: So you talk with him. ¶

Akṣayānanda: …they say that Rāmacandra ate meat. Some people have said to me… ¶

Prabhupāda: Then you are rascal. ¶

Whatever action is performed by a great man, common men follow in his footsteps. And whatever standards he sets by exemplary acts, all the world pursues.. Whatever the great men do, you must follow in their footsteps. ¶

Prabhupāda: Then how you can? These rascals, these Māyāvādīs, they play rāsa-līlā. [break] …ācarati śreṣṭhas means that śreṣṭha is ordinary person, but not Bhagavān. Bhagavān can act any way. And still, Bhagavān has never instructed you that “You imitate Me in raising the Govardhana Hill.” Has He said like that, that “You also raise the Govardhana Hill like Me”? [break] …orders man-manā bhava mad-bhakto ṁad-yājī mām [Bg. 18.65]plugin-autotooltip__small plugin-autotooltip_bigBhagavad-gītā As It Is 18.65

Always think of Me and become My devotee. Worship Me and offer your homage unto Me. Thus you will come to Me without fail. I promise you this because you are My very dear friend.. That is for you. Always think of Him. Always become His devotee. Worship Him. Offer your obeisances. That’s all. That is for you. Yaśodāmayī was asking Kṛṣṇa, “My dear Kṛṣṇa, can You bring the slipper of Your father?” He could not. He was a small child. Still, with great difficulty He could raise that. But the person who can raise the Govardhana Hill, He was feeling difficulty to raise the slipper? Why? If at that time He becomes like Govardhana, Giridhārī, then the līlā between father and son will be damaged. He plays just like a child, although He can raise even in that age, to raise the hill. ¶

One should understand Kṛṣṇa. Everyone compares Him with ordinary man: “Kṛṣṇa has done this? Then I shall do.” Kṛṣṇa has done so many other things. Why don’t you do it? This rascal… Anyone who imitates Kṛṣṇa on the plea that “Kṛṣṇa has played this; therefore we shall do…” He can do anything. He can eat meat and He can eat the whole universe. That was shown to His mother: “Mother, you are angry because I have eaten dirt. Now see within My mouth the whole universe is in. So what is the question of dirt and sea and ocean? I can eat everything.” [break] …sam na doṣāya. Just like this sun: it dry up this urine, it is not infected. But you lick up this urine and let us see how powerful you are. Tejasaṁ na doṣāya. Who is powerful, he can do anything and everything, whatever he likes. You cannot do that. [break] …example. This urine, within an hour it will be dried up. How it is dried up? Due to the sun. But the sun is not polluted. But you try to dry up and see the result. ¶

Hari-śauri: Śrīla Prabhupāda? Wasn’t it Lord Rāmacandra’s purpose to actually display by His activity how a perfect human being should act? ¶

Whatever action is performed by a great man, common men follow in his footsteps. And whatever standards he sets by exemplary acts, all the world pursues., that was referring to Lord Rāmacandra. ¶

Prabhupāda: Everyone is referred, but whatever Rāmacandra says, you should do that. You should not imitate. There are two words: “following” and “imitating.” Imitation is not good. Following is good. Yad yad ācarati śreṣ… You can… That I have already explained. Can you construct a bridge on the ocean? You are claiming, yad yad ācarati. Can you do this? Then why do you say like that? You cannot imitate. You can follow only. “Because Rāmacandra ate meat, so I am eating meat. I become Rāmacandra.” And why don’t you construct a bridge on the ocean? ¶

Akṣayānanda: So actually, perfect kings, they may have eaten meat? Perfect kings… ¶

Prabhupāda: No, perfect king must follow the Vedic injunction. ¶

Akṣayānanda: They would never eat meat, even though they are kṣatriyas. ¶

Prabhupāda: No, kṣatriyas are allowed. That is by hunting, not otherwise. Or yajña. Everything is there in the śāstra. [break] …candra, even He was eating meat, is there any instance in the temple Rāmacandra is offered meat? Then why do you claim, “Rāmacandra used to eat meat, therefore I shall eat”? All rascals. Kṛṣṇa, He ate fire, khāṇḍava-dāna. But what He asked you to offer? Does He say that “You offer Me fire”? He says, patraṁ puṣpaṁ phalaṁ toyaṁ yo me bhaktyā prayacchati [Bg. 9.26]plugin-autotooltip__small plugin-autotooltip_bigBhagavad-gītā As It Is 9.26

If one offers Me with love and devotion a leaf, a flower, fruit or water, I will accept it.. Does He say that “You give Me fire. I shall eat”? ¶

Akṣayānanda: You mean He eats fire in His representation as the fire-god? ¶

Prabhupāda: No representation. As He is. He never assumed as fire-god. He was boy, and playing, and there was fire and He ate it. That is God, not that He became a fire-god. What is fire-god? Thousands of fire-gods are staying on the nail of His feet. Why He should become a fire-god? Mahat-padam. Kṛṣṇa’s another name is mahat-padam. The whole energy of material world is on His feet. Samāśritā ye pada-pallava-plavaṁ mahat-padaṁ puṇya-yaśo murāreḥ [SB 10.14.58]. So they attend maṅgala-arati? ¶

Prabhupāda: They do? ¶

Devotee: Yes, they do. ¶

Prabhupāda: Very good. [break] …them there are cycles. The cycles are more dangerous than the motorcar. ¶

Haṁsadūta: Because you can’t hear them. ¶

Prabhupāda: No, no, hear… Gives you dash. You see? From the behind. [aside:] Hare Kṛṣṇa. ¶

[break] …God, they do like that. They give this example, “In such and such yajña, ṛṣis were eating meat; therefore we shall eat meat.” In the Ramakrishna Mission, sannyāsīs, they say like that. ¶