Prabhupāda: You have done good because you are waiting for somebody’s decision. So the decision-maker can change. Otherwise so many people are working so hard day and night, he is not getting even sufficient food. And another man, without working, he is getting so much money. How it is possible? Hmm? So God is not an instrument of your whims. He is fully independent. That is God. 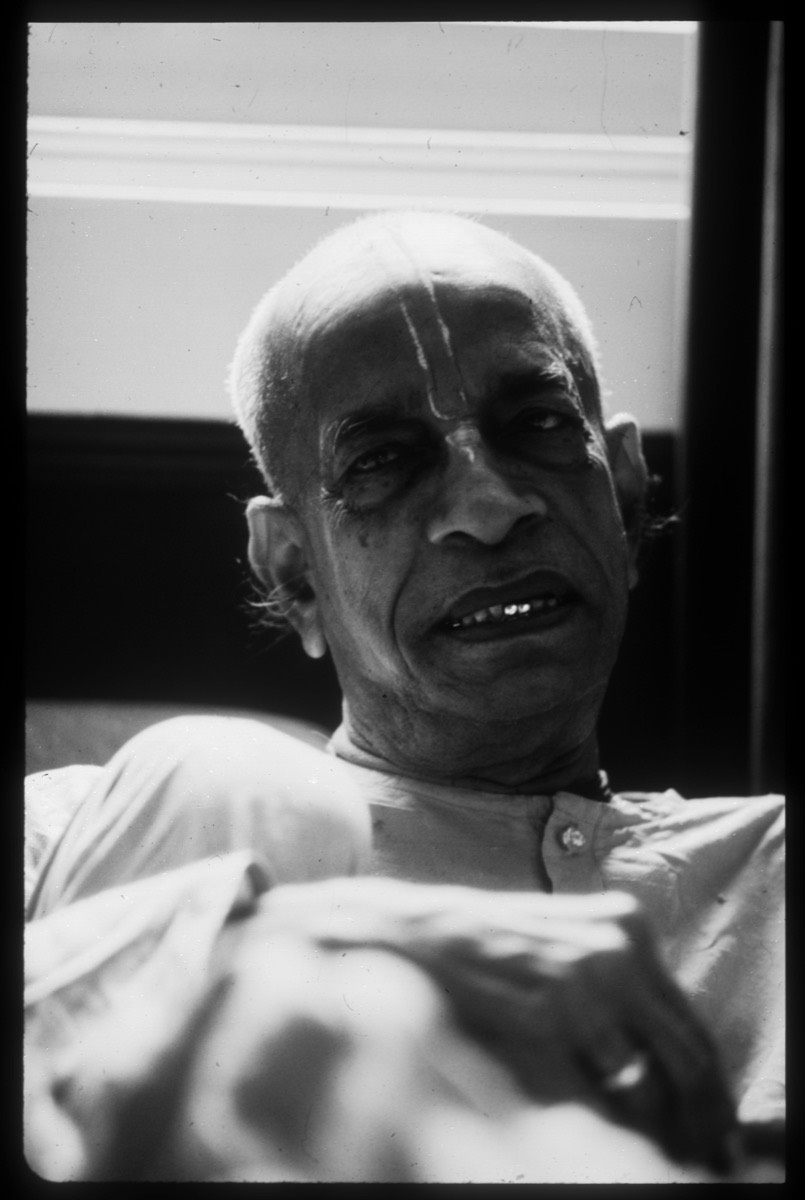 Prabhupāda: You have done good because you are waiting for somebody’s decision. So the decision-maker can change. Otherwise so many people are working so hard day and night, he is not getting even sufficient food. And another man, without working, he is getting so much money. How it is possible? Hmm? So God is not an instrument of your whims. He is fully independent. That is God. Agatan gatan patiyase.[?] By His different energy He can…, does something which is impossible to be done. Take for example myself. I went to United States, unknown country, without any friend, without any hope, simply on theory [chuckles] that “I shall go and preach there,” and with this expectation also, that “As soon as I shall ask them to give up all these habits, they will ask me to go away.” [laughs] So in the face of so many odds and uncertainty, I went there, simply depending on my spiritual master and Kṛṣṇa, with this hope only, that “If there is desire, everything can be done. But otherwise there is no hope. I am going there, hopeless, just to make an experiment. My other Godbrothers, they failed. All right, Guru Mahārāja asked me. In the beginning I did not do. Let me do it in this old age.” So it became surprisingly success. Business started with forty rupees, and now we have got four crores. Where is that business in the material world, that a man started business with forty rupees and he has got four crores within ten years? Not only money but also fame, respect. What do these kings and president or minister get, respect? ¶

Puṣṭa Kṛṣṇa: Still, they get kicked on the face like Nixon. ¶

Prabhupāda: Nobody would sincerely respect them. Only for some self-interest. But here, respect opportunity, it is out of love. That is not for any bargaining. So who can get this? So this is God’s… So one has to see by the result. That is stated in the… I think we have described: the, what is called, container is understood by the quantity of contents. The container is understood by the quantity of the contents. The example is given of water—water, air, and bright[?]. When there is good flame, then we can understand that the contents is very inflammable. Just like petrol. So that is in comparison where when there is big amount of, quantity of water, that means the container is big. Similarly, the big quantity of ether, then it is to be understood, quantity according to the content. So one has to understand, as Kṛṣṇa said, yad yad vibhūtimat sattvaṁ mama tejo-‘mśa… [Bg. 10.41]plugin-autotooltip__small plugin-autotooltip_bigBhagavad-gītā As It Is 10.41

Know that all beautiful, glorious, and mighty creations spring from but a spark of My splendor.. How much Kṛṣṇa’s favor is there, we have to understand from the contents. Then we can understand, we can make an estimate of the container. By the quantity of contents we can understand the, what is called…? ¶

Prabhupāda: Capacity of the container. This is described in the Bhāgavata and the Caitanya-caritāmṛta also. Kṛṣṇa śakti vina nahe kṛṣṇa nāme pracāra: “Without Kṛṣṇa’s special power of attorney, nobody can preach His name.” Caitanya-caritāmṛta. So these rascals, Godbrothers, they are envious that… What he has written, Bon Mahārāja? Just see what kind of men they are. They are not even ordinary human being. They are envious of me, and what to speak of make a judgment by estimation? They’re envious. Enviousness is immediately disqualification of Vaiṣṇava. Immediate. He is not a human being. Paramo nirmatsarāṇāṁ satāṁ [SB 1.1.2]plugin-autotooltip__small plugin-autotooltip_bigŚrīmad Bhāgavatam 1.1.2

Completely rejecting all religious activities which are materially motivated, this Bhāgavata Purāṇa propounds the highest truth, which is understandable by those devotees who are fully pure in heart. The highest truth is reality distinguished from illusion for the welfare of all. Such truth uproots the threefold miseries. This beautiful Bhāgavatam, compiled by the great sage Vyāsadeva [in his maturity], is sufficient in itself for God realization. What is the need of any other scripture? As soon as one attentively and submissively hears the message of Bhāgavatam, by this culture of knowledge the Supreme Lord is established within his heart.. This Bhāgavatam is meant for the person who is completely not envious. That is the beginning. Why a Vaiṣṇava should be envious for anyone? Everyone is working according to his karma. He is trying to rectify him, that “Be out of these clutches of karma. You come to bhakti.” Why he should be envious? Vāñchā-kalpatarubhyaś ca kṛpā-sindhubhya eva ca. A Vaiṣṇava should be like ocean of mercy to reclaim the fallen souls. That is Vaiṣṇava’s qualification. So Vaiṣṇava should be envious? Just see. ¶

So these persons, they are not even human being, what to speak of Vaiṣṇava. Vaiṣṇava cannot be envious. Vaiṣṇava should be: “Oh, my Lord’s name is being broadcast. He is getting…, giving so much service to make Kṛṣṇa known.” Just like this man has appreciated, that “All these spiritual leaders, they are deriding. You are the only man… You are… It enthuses us, give us more encouragement, that you are keeping intact love of Kṛṣṇa.” This is an appreciation. Why he should be envious? He should be, rather, very much enthused that “This single man is keeping Kṛṣṇa all over the world.” And everyone is deriding. Even Gandhi is killing Kṛṣṇa. Dr. Radhakrishnan is killing. Their only business is to kill Kṛṣṇa. He is also doing that, our this Bon Mahārāja. He never speaks of Kṛṣṇa. His rascal, that Institute of Indian Philosophy, nobody goes to urine there. We see practically. And our temple is always filled up, five hundred men. And he is trying for the last forty years. He is simply planning: “This will be playground. This will be this ground. This will be this ground.” And it is becoming jungle. Still, he is so envious, black snake. So one circular letter should be issued to all our center, that “Any…, Bon Mahārāja or anyone, his representative, should not be received.” They are envious. Yes. Quoting that. We have got several complaints like that. Satsvarūpa also complained, sometimes our order was cancelled by Bon Mahārāja’s propaganda. ¶

Puṣṭa Kṛṣṇa: You mean he has been corresponding with professors in America? ¶

Prabhupāda: Yes. Because he has got that background. ¶

Puṣṭa Kṛṣṇa: Some catalog, with his literature. There must be some catalog or something that his list of books is in. ¶

Puṣṭa Kṛṣṇa: Something. Or the Oriental… ¶

Prabhupāda: He has no book. ¶

Harikeśa: Just that one book. ¶

Prabhupāda: That is also… ¶

Puṣṭa Kṛṣṇa: Also, when I read that book long time ago, he said in the introduction that once he took a vow for two years not to speak anything. I thought it was very strange for a Vaiṣṇava. ¶

Harikeśa: He lived underneath the ground in one cell. You know that? ¶

Puṣṭa Kṛṣṇa: You’ve said, “Yes, if someone can only speak nonsense, they shouldn’t speak. But if they can speak about Kṛṣṇa to glorify Kṛṣṇa—kathayantaś ca māṁ nityam [Bg. 10.9]plugin-autotooltip__small plugin-autotooltip_bigBhagavad-gītā As It Is 10.9

The thoughts of My pure devotees dwell in Me, their lives are surrendered to Me, and they derive great satisfaction and bliss enlightening one another and conversing about Me.—then always they can talk about Kṛṣṇa.” ¶

Puṣṭa Kṛṣṇa: No, you say. He said, “I have taken vow not to speak anything.” ¶

Puṣṭa Kṛṣṇa: I thought it was crazy. ¶

Harikeśa: We’re having the morning walk in the room today. [end] ¶