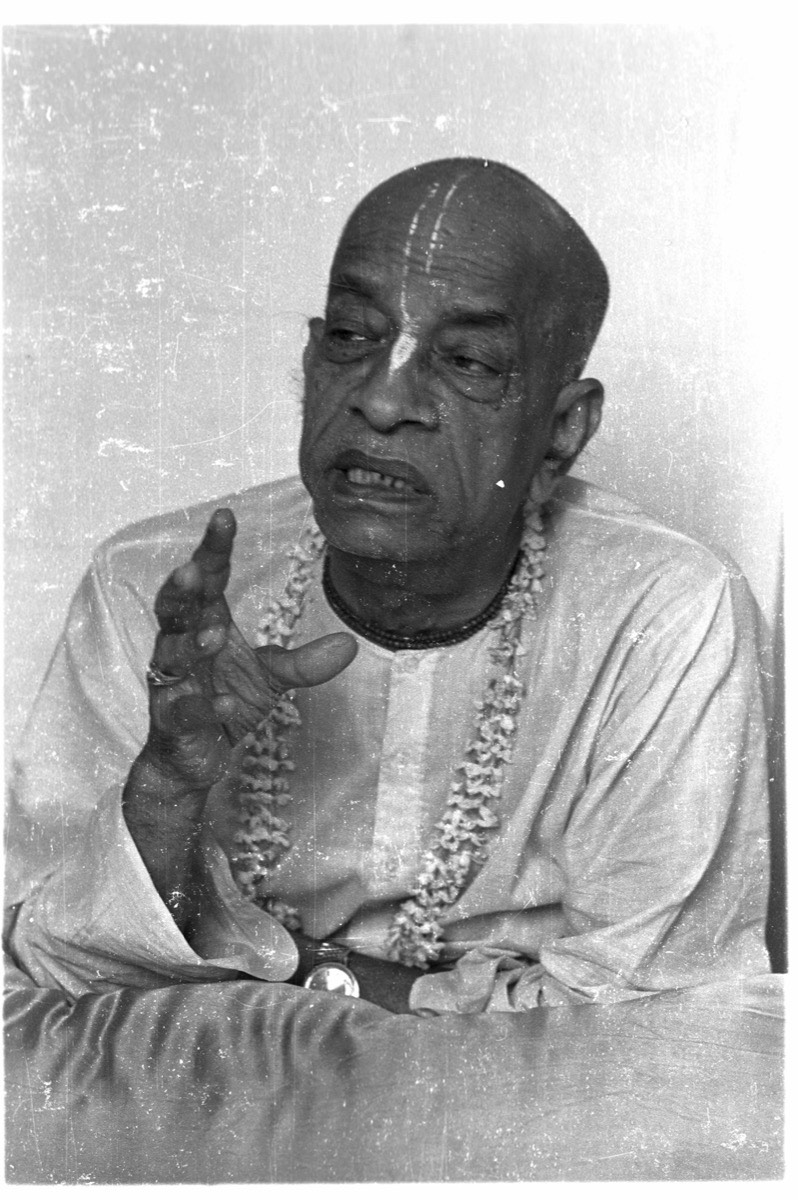 The Viṣṇudūtas continued: Even previously, while eating and at other times, this Ajāmila would call his son, saying, "My dear Nārāyaṇa, please come here." Although calling the name of his son, he nevertheless uttered the four syllables nā-rā-ya-ṇa. Simply by chanting the name of Nārāyaṇa in this way, he sufficiently atoned for the sinful reactions of millions of lives.

The Viṣṇudūtas continued: Even previously, while eating and at other times, this Ajāmila would call his son, saying, "My dear Nārāyaṇa, please come here." Although calling the name of his son, he nevertheless uttered the four syllables nā-rā-ya-ṇa. Simply by chanting the name of Nārāyaṇa in this way, he sufficiently atoned for the sinful reactions of millions of lives.

So the question is that “When this man became sinless?” So that answer is given here, etenaiva: “This chanting of ‘Nārāyaṇa,’ by this process,” eva, “indeed, he, also,” aghonaḥ—agha means “sinful”—asya, “of this Ajāmila,” kṛtaṁ syād agha-niṣkṛtam, “he is now cleansed of all sinful reaction.” When he became? Yadā, “from that time,” yadā, nārāyaṇa, “ ‘O Nārāyaṇa,’ ” āyeti, āyeti, “ ‘Come here please…’ ” He was affectionate to his youngest son, little son, child. Generally, father-mother becomes very much attached. So this child was named Nārāyaṇa. So constantly he was chanting, “Nārāyaṇa, please come here.” [aside:] What is that? ¶

So Nārāyaṇa is so kind that although he did not mean real Nārāyaṇa—he was meaning his son—but the affection was there for Nārāyaṇa. So Nārāyaṇa is so kind that consciously or unconsciously, if you chant the holy name of the Lord, it goes to your credit. Just like sometimes when you walk in the street, people say “Hare Kṛṣṇa!” So this is also going to their credit. When they offer their respect to a Vaiṣṇava, that goes to their credit. When one comes in this temple, offers his obeisances, it goes to their credit, because Kṛṣṇa says, man-manā bhava mad-bhakto mad-yājī māṁ namaskuru [Bg. 18.65]plugin-autotooltip__small plugin-autotooltip_bigBhagavad-gītā 18.65

Always think of Me and become My devotee. Worship Me and offer your homage unto Me. Thus you will come to Me without fail. I promise you this because you are My very dear friend.. So some way or other, with some purpose even it is so… Generally people come with a purpose, that “I shall go to the temple, offer my respect to the Deity, and I shall ask this benediction.” That is also good, even if he has come with a motive. So Nārāyaṇa or Kṛṣṇa is so kind. Kāmād bhayāt lobhāt… Or if one chants Nārāyaṇa name with śuddha, then what to speak? ¶

So this Kṛṣṇa consciousness movement is so nice that even people joke with us, “Hare Kṛṣṇa,” it goes to his credit, even joking. When this Hare Kṛṣṇa movement was started by Caitanya Mahāprabhu, at that time India was under Pathan rule, Muhammadan kingdom. So the constables, they were requested to “Arrest these chanters.” The brāhmaṇas, the smārta brāhmaṇas, because Caitanya Mahāprabhu preached that “Simply by chanting Hare Kṛṣṇa mantra you will be liberated,” so the smārta brāhmaṇas, they thought it very dangerous, because their profession will be lost. So they protested to the magistrate, Muhammadan magistrate, Chand Kazi, that “This Caitanya, the Nimāi Paṇḍit, He has inaugurated one movement that ‘Simply by chanting one will become liberated.’ This is not according to our Hindu scripture. So you may be Muhammadan, but you are our ruler. You should give us some protection. Otherwise this Nimāi Paṇḍit will ruin our Hindu religion.” This was the complaint. So after all, he is the magistrate. He took some action, and he forbade through the constables that “You cannot chant.” Caitanya Mahāprabhu, when He was informed by His followers that “We have been ordered by the magistrate to stop…” Just like in foreign countries we are being very occasionally arrested by the police, taken to the jail. So many obstacles are there. But our students are so adamant, they don’t stop. They prefer to go to jail, but they will never stop. They are so much determined. ¶

So this persecution of devotees, it is from the very beginning. Prahlāda Mahārāja, he was five-years-old boy, and he was simply chanting “Nārāyaṇa.” So his father became enemy, what to speak of others. His father. He was atheist. He did not believe in God. So he asked his son, “Why you are chanting ‘Nārāyaṇa’?” “Nārāyaṇa is God, the Supreme Lord.” “Eh? Supreme Lord? I am Supreme Lord. You chant my name.” The boy will not hear. So there was enmity. He was persecuted. So not in this age. Devotees are supposed to be persecuted all the time. Christ was crucified. So this is the position of the devotee in the material world, that they become very easily enemy of the demons. But the devotees are not afraid of the demons. ¶

So the purport is that yadā nārāyaṇa āyeti jagāda catur-akṣaram. So Ajāmila was benefited, although he did not know the distinction between pious and impious activity on account of too much attachment with this material world. He was the husband of a prostitute, and he got some children. So to maintain the family and children he used to adopt any means, never mind. He did not know what is sinful and what is not sinful. But his only credit was that he was chanting “Nārāyaṇa.” He was chanting “Nārāyaṇa.” It does not mean knowingly we shall commit sinful activities and chant “Nārāyaṇa.” It is not meant, that. He did not know what is sin, what is not sin, what is Nārāyaṇa, but circumstantially he was doing all the sinful activities; at the same time he was chanting “Nārāyaṇa.” This is by accident. He did not know that “I am becoming sinless by chanting Nārāyaṇa.” He did not have that concept. Knowingly… Nāmnād balād yasya hi pāpa-buddhiḥ. If somebody chants the name of Nārāyaṇa knowingly, that “I am chanting the name of Nārāyaṇa; therefore let me do…, act some sinful activity,” it will be counteracted. They are very sinful. They are not excused. But he was innocent. He did not know that what is the effect of sinful activities, neither he knew what is sinful activities, neither he knew what is Nārāyaṇa. Therefore it was going to his credit. The Viṣṇudūta informed the Yamadūta that “He is already cleansed. Don’t worry about him.” Because he was chanting nārāyaṇāyeti. Nārāyaṇāyeti: “Nārāyaṇa, my dear son, please come here.” He was very much attached. Yadā nārāyaṇeti jagāda. He uttered catur-akṣaram, four words, four alphabets only, catur-akṣaram. ¶

So Śrīla Viśvanātha Cakravartī Ṭhākura has given in this connection many, many quotation from the śāstra how one can become free from all sinful reaction by chanting the holy name of the Lord, importance of chanting the holy name. So we are also preaching the same thing under the direction of higher authorities, Caitanya Mahāprabhu. ¶

O learned one, in this iron age of Kali men have but short lives. They are quarrelsome, lazy, misguided, unlucky and, above all, always disturbed.. This is the position of the people in this age. They are mandāḥ, all bad, all bad. You cannot distinguish who is bad and who is good. All bad, and very slow. They do not know what is the value of life, how to make this human form of life successful. Mandāḥ. Just like we are chanting all over the whole world that “Chant Hare Kṛṣṇa mantra and you will be happy.” Still, they are not very much interested. Mandāḥ, slow: “All right, I shall do it at the time of death. Now let me enjoy.” Mandāḥ. And manda-matayo. And if one is interested for spiritual advancement of life, he will go to some rascal, some avatāra, some yogī, some bluffer, some magician, as spiritual salvation. Mandaḥ manda-matayo. Why they are attracted by these rascals? Manda-bhāgyā: unfortunate. Kṛṣṇa says directly, sarva-dharmān parityajya mām ekaṁ śaraṇaṁ vraja [Bg. 18.66]plugin-autotooltip__small plugin-autotooltip_bigBhagavad-gītā 18.66

Abandon all varieties of religion and just surrender unto Me. I shall deliver you from all sinful reaction. Do not fear.. They will not hear Kṛṣṇa. They will hear these rascals, so-called yogīs, so-called avatāras, so-called mahātmās. Manda-bhāgyāḥ. Therefore upadrutāḥ. They are always, constantly, disturbed. This is the position. ¶

So therefore this age, Kali-yuga, is the ocean of faulty things. Doṣa-nidhi. Nidhi means ocean. And you will find, just like unfathomed water in the ocean, Pacific Ocean, similarly, this Kali-yuga is the ocean of unfathomed sinful activities. Kalau doṣa-nidhe. But Śukadeva Gosvāmī said to Parīkṣit Mahārāja, kalau doṣa-nidhe rājan hy asti eko mahān guṇaḥ [SB 12.3.51]. In this age this ocean of faults, there is a very valuable thing. That is special concession to these fallen souls of this age. Because Kṛṣṇa is so kind, He is always anxious to deliver us. Yadā yadā hi dharmasya glānir bhavati bhārata, tadātmānaṁ sṛjāmyaham [Bg. 4.7]plugin-autotooltip__small plugin-autotooltip_bigBhagavad-gītā 4.7

Whenever and wherever there is a decline in religious practice, O descendant of Bharata, and a predominant rise of irreligion—at that time I descend Myself.. He is father. He is the seed-giving father of all living entities. We are part and parcel of Kṛṣṇa, mamaivāṁśaḥ. So He is very unhappy. Of course, He cannot be unhappy. Ānandamayo ‘bhyāsāt [Vedānta-sūtra 1.1.12]. But at least, because we are His sons and we are rotting in this material world for sense gratification, in this way He is very sorry. ¶

Those miscreants who are grossly foolish, lowest among mankind, whose knowledge is stolen by illusion, and who partake of the atheistic nature of demons, do not surrender unto Me.

Because they have been trained up with the atheistic temperament they will never surrender. They will go on committing sinful life, duṣkṛtina. They do not know what is the value of life, mūḍha. And in spite of getting this human form of life, still, they remain mūḍha. Therefore narādhamā, the lowest of the mankind. “No. They are passing M.A., B.A. examination, and so many titles, academic career.” Māyayāpahṛta-jñānāḥ. This kind of knowledge has no value. The value is already taken away. Therefore you will find highly educated person: he is committing sinful life, organized. Māyayāpahṛta-jñānā. He does not know how to live. Why? The basic principle is āsuri-bhāvam āśritāḥ. Because they have taken the atheistic way of life, therefore they are suffering. ¶

So Rāma and Kṛṣṇa is the Supreme Lord, and Hare means Harā. So Harā means the potency, pleasure potency of the Supreme Lord, Harā. It is addressed as Hare. So Hare Kṛṣṇa means Rādhā-Kṛṣṇa, and Hare Rāma means Sītā-Rāma. So either you chant Hare Kṛṣṇa or Sītā-Rāma, it is the same. And this is the only way. This is only. There is no difficulty. So however your condition may be fallen, take this instruction of the śāstras and chant, ¶