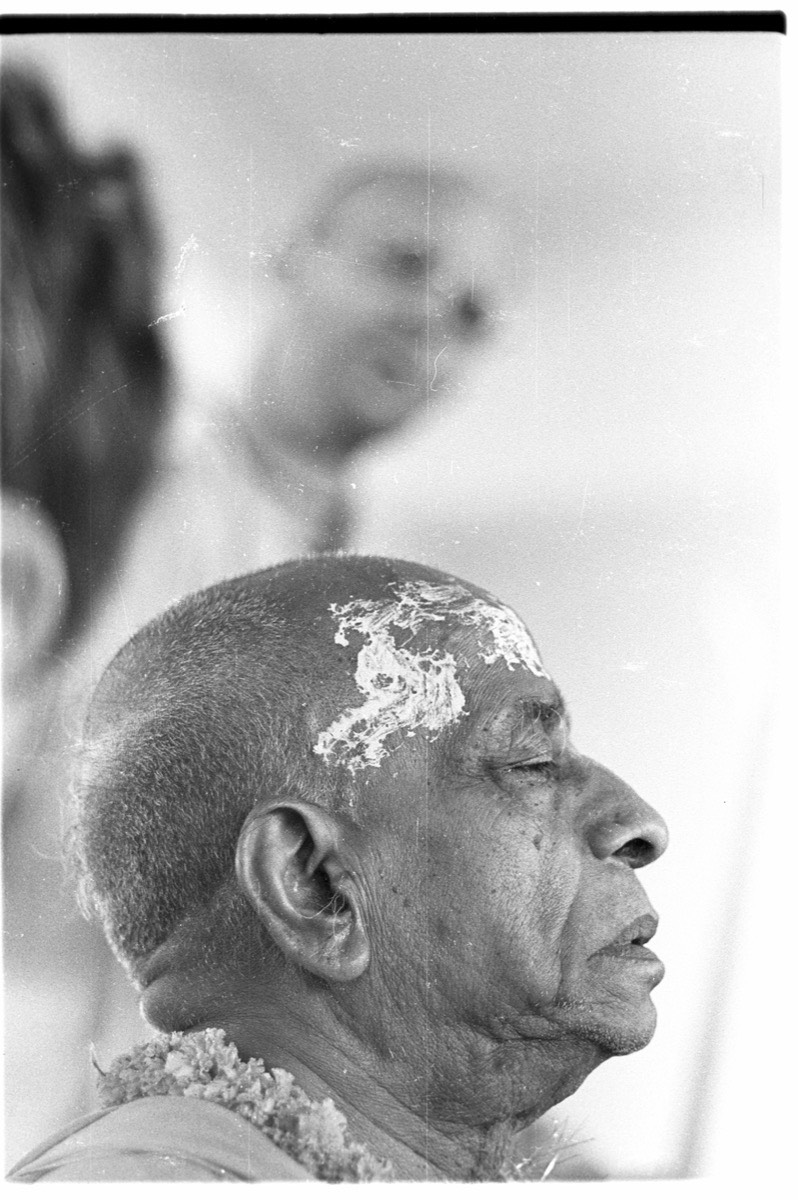 Madhudviṣa: And he was telling me that the house that you are living in, Prabhupāda House, was built in 1885. ¶

Prabhupāda: Judge. He was judge. ¶

Madhudviṣa: He was a judge, yes. And he import… He went to great extent to build the house. It was during this boom area, when… ¶

Madhudviṣa: Yeah, the Englishmen were coming, and because Queen Victoria was there…, the king had died, so the order was passed that no one could buy any, I think, jewelry for their wives. ¶

Madhudviṣa: It was something… The English frowned upon buying jewelry and ornaments for the women. So the men were using their money to build big houses. ¶

Madhudviṣa: So therefore during the Victorian area, era, you have many elaborate houses that were built by the Britishers. And he… ¶

Madhudviṣa: He was said to have brought some Italian plasterers from Italy to do all that elaborate work on the ceilings in the house. ¶

Madhudviṣa: So many people are anxious to come into the house to see the work in the construction of the house. And it has been classified as a building of national importance. ¶

Madhudviṣa: Oh, yes. It is important building. They cannot… It is not allowed to be torn down. It is protected by the… ¶

Madhudviṣa: Historical building. It is protected by the government. ¶

Śrutakīrti: Yesterday you were telling Bhūrijana they should make the temple a tourist attraction. So with this method, it would be very easy. ¶

[break] [on walk] …this planet, there are seven other planets. There, sunshine does not go. But they are very well situated. ¶

Madhudviṣa: Well situated? Even though there’s no sun? ¶

Prabhupāda: Yes, but there are snakes which has got jewel on the head. That light keeps them illuminated. ¶

Madhudviṣa: But does that light also keep them healthy? ¶

Madhudviṣa: Like the sun gives us…, keeps us healthy. ¶

Madhudviṣa: So the jewels from the snakes can also provide that nutrition? ¶

Paramahaṁsa: So those snakes are very important. [break] ¶

Prabhupāda: …plans. They had to work very hard to find out, “What is this? What is this?” So that is described in the Śrīmad-Bhāgavatam, kliśyanti kevala-bodha-labdhaye [SB 10.14.4]: “Working hard simply to know.” Kliśyanti. Kliśyanti means working very hard, labor, kevala-bodha-labdhaye, simply to understand. But they are not kliśyanti to understand God. Kliśyanti kevala-bodha-labdhaye. This kind of knowledge is compared with beating the bush, that’s all. After taking away the paddy grains, only the skin remains. And if you again beat the skin to get grains, that is not possible. ¶

Prabhupāda: Yes. It is like that. Kliśyanti kevala-bodha-labdhaye. [break] ¶

Devotee (2): Prabhupāda, I have seen in New Zealand that the dairy farmers, they cut the tails off the cows. ¶

Devotee (2): The farmers have cut the tails off the cows in New Zealand. ¶

Devotee (2): Yeah, they cut the tails off so that when they’re milking, the tails won’t hit them in the face. They do this to all their cows in the milking sheds. ¶

Prabhupāda: For what purpose? The tail, cut the tails? ¶

Śrutakīrti: When you milk the cow, they sometimes hit you in the face with their tail. ¶

Paramahaṁsa: Sometimes it’s very dangerous. They can hurt your eye or something. ¶

Śrutakīrti: In New Vrindaban sometimes they tie it to the ceiling. But not cutting. [break] ¶

Madhudviṣa: Combination. Of something else besides…? ¶

Prabhupāda: Impersonalists, they do not accept personal feature. Means they fall down again. ¶

Madhudviṣa: That means there must be a lot of impersonalists. ¶

Madhudviṣa: It seems there would be a lot of impersonalists. ¶

Prabhupāda: No. More than them, there are personalists. They are in Vaikuṇṭhaloka. [break] ¶

Devotee (3): Is there any real happiness? ¶

Devotee (4): Śrīla Prabhupāda, what is the advantage of going to India, to Vṛndāvana? ¶

Devotee (4): What is the advantage of going… ¶

One can attain the path of liberation from material bondage only by rendering service to highly advanced spiritual personalities. These personalities are impersonalists and devotees. Whether one wants to merge into the Lord's existence or wants to associate with the Personality of Godhead, one should render service to the mahātmās. For those who are not interested in such activities, who associate with people fond of women and sex, the path to hell is wide open. The mahātmās are equipoised. They do not see any difference between one living entity and another. They are very peaceful and are fully engaged in devotional service. They are devoid of anger, and they work for the benefit of everyone. They do not behave in any abominable way. Such people are known as mahātmās.. In the Western countries and…, they are simply busy in sense gratification. So that is the way of hell. [break] ¶

Devotee (5): …said that “In the beginning was the word, and the word was with God.” ¶

Prabhupāda: Hmm? In the beginning there was word. So what is the difficulty to understand? ¶

Paramahaṁsa: He’s saying if everything is eternal, then how was there a beginning? ¶

Madhudviṣa: There should be flowers all over there. ¶

Again and again the day comes, and this host of beings is active; and again the night falls, O Pārtha, and they are helplessly dissolved.: “It begins and ends.” That requires intelligence, that “I am eternal. Why should I accept anything which has beginning and end?” That is intelligence. ¶

Devotee (6): Was there a time when there was no material world? ¶

Devotee (6): Was there a time when there was no material world? ¶

Prabhupāda: No, no. The material world in potency is always there. But it has got a manifestation beginning, and again end. It begins from God, and again it ends in God. But God is eternal. [break] …feeling of your, it is manifested, and sometimes it is not manifested. But the feeling potency is there. Just like sometimes I become angry and sometimes not angry, but the potency of becoming angry is there. That is eternal. Similarly, the material world, the material energy, or the material nature, is permanent, but it is sometimes manifest, sometimes not manifest. It is now manifest. It will end. Again, another body you will manifest, and it will end. But I am eternal. ¶

Prabhupāda: No, it is by nature forced. ¶

Madhudviṣa: But that is material. ¶

Madhudviṣa: So how is material forcing something spiritual? ¶

Prabhupāda: You have voluntarily accept her supremacy. Just like you have accepted some disease. The disease is forcing you. And if you cure, then it will not be able to force you. You infect some disease, then you become forced by the disease to accept the miseries. But if you are not diseased, there is no question of force. If you become criminal, the police forces you. And if you are not criminal, you have no business with the police. It is like this. Police control, controller—the controlling power upon me comes when I am criminal. Otherwise, why police will control me? Therefore I voluntarily accept the control of police by my criminal desires. That is going on. That is material life. ¶

Madhudviṣa: But would that mean that a person who is a pure devotee doesn’t have to die? ¶

Prabhupāda: No, die… Pure or nonpure, nobody dies. ¶

Madhudviṣa: Though his material body dies. But a pure devotee… ¶

Prabhupāda: Yes. But a pure devotee goes back to home. There is no more material body. That is the… So we are advocating that you come to this stage where you will not to have accept this material body. Then you are really happy. And if you want to enjoy the flickering, illusory māyā, then you are subjected to the māyā. You are enjoying as American. Then you enjoy as a dog. That is māyā’s control. But if you don’t enjoy material things, then you become purified. You come to the eternal life, back to home, back to… But they are not willing to give up this material enjoyment. That is the defect. So it requires education. It requires knowledge. It requires training. ¶

Devotee (7): Prabhupāda, when you leave this material world, will there be another spiritual master after you? Another pure soul? ¶

Devotee (8): Śrīla Prabhupāda, many people who live outside the temple have Jagannātha deities and Gaura-Nitāi Deities. ¶

Devotee (8): Many people who live outside the temple have Jagannātha deities and… ¶

Devotee (8): So they have to do full Deity worship when they have these Deities? ¶

Devotee (8): So they have to do full Deity worship to have these Deities? Dress the Deities every day? ¶

Prabhupāda: They are supposed to do so, but whether they are able to do so, that is the point. If you can worship properly, that’s all right. But whether you are able to worship? ¶

Devotee (7): Prabhupāda, can a person go back to a spiritual planet without initiation? ¶

Devotee (7): Can a person go back to a spiritual planet… ¶

Prabhupāda: No, there is no more init… Initiation here required when the living entity is in darkness. Just like uneducated person requires to go to school. One who is educated, in his full knowledge, he doesn’t go. ¶

Madhudviṣa: The question was, Prabhupāda, is it possible for a person to return to the spiritual world without taking initiation from a bona fide spiritual master? ¶

Devotee (9): Śrīla Prabhupāda, what are you saying? You said before there’s no necessity for a spiritual master, and now you… ¶

Paramahaṁsa: He said in the spiritual world there is no necessity. ¶

Paramahaṁsa: Śrīla Prabhupāda, it appears that there is a group of persons here in Australia who think, judging from the different questions that are being asked, they are thinking that it is not required to formally accept… ¶

Prabhupāda: There are so many rascal svāmīs come. They say like that, “There is no need of guru.” ¶

Paramahaṁsa: Yeah, right. They think that Kṛṣṇa is in the heart, and you can accept initiation by that way. ¶

Prabhupāda: You do not know where to find out Kṛṣṇa in the heart. [end] ¶

Room Conversation with Two Lawyers and Photographer — May 22, 1975, Melbourne