Jayādvaita: ...the names of Kṛṣṇa as the spiritual master or the ācāryas have chanted them, but sometimes I’ll hear that our devotees will be chanting Kṛṣṇa’s name in different ways that I haven 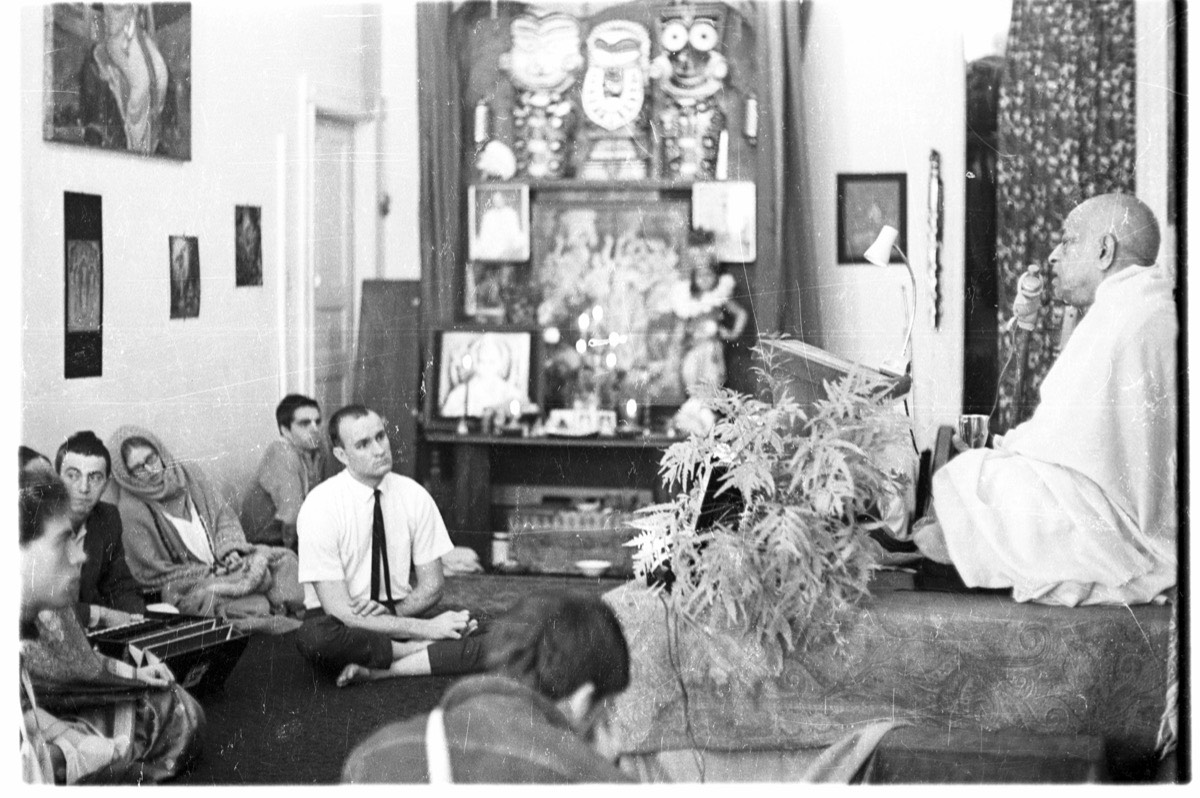 Jayādvaita: …the names of Kṛṣṇa as the spiritual master or the ācāryas have chanted them, but sometimes I’ll hear that our devotees will be chanting Kṛṣṇa’s name in different ways that I haven’t heard, in kīrtana. ¶

Prabhupāda: I do not follow what you say. ¶

Śrī Caitanya Mahāprabhu continued," 'Dry arguments are inconclusive. A great personality whose opinion does not differ from others is not considered a great sage. Simply by studying the Vedas, which are variegated, one cannot come to the right path by which religious principles are understood. The solid truth of religious principles is hidden in the heart of an unadulterated self-realized person. Consequently, as the śāstras confirm, one should accept whatever progressive path the mahājanas advocate.' ". We have to follow the mahājana. In Caitanya-caritāmṛta you’ll find “Śrī-Kṛṣṇa-Caitanya Prabhu-Nityānanda, Śrī-Advaita Gadādhara…,” never “Nitāi Gaura, Rādhe Śyāma.” So why should we do that? ¶

Jayapatāka: The concocter of the “Nitāi Gaura Rādhe Śyāma,” previously he was a follower of Bhaktisiddhānta, but then he was rejected, and then he started his own camp. ¶

Prabhupāda: No…, he was, he was meeting Bhaktivinoda Ṭhākura. So… What is called? Carana dāsa Bābājī. ¶

Satsvarūpa: Śrīla Prabhupāda, sometimes during ārati, many bona fide bhajanas are sung, but not much Hare Kṛṣṇa. Is that not a good tendency, that maybe just two or three minutes of Hare Kṛṣṇa mantra and many other bhajanas? ¶

Prabhupāda: No. We should stick to Hare Kṛṣṇa. Śrī-Kṛṣṇa-Caitanya Prabhu-Nityānanda, Jīva jāgo jīva jāgo, these are authorized. But Hare Kṛṣṇa is the mahā-mantra. What is sung by mahājana, Bhaktivinoda Ṭhākura, Narottama dāsa Ṭhākura, that can be sung. [break] ¶

Jayapatāka: …you say back to Godhead. But when one is situated in pure, transcendental love of Kṛṣṇa, then that’s…, then wherever he may be, that’s back to Godhead, isn’t it? ¶

Jayapatāka: So then we should desire not to go back to Vaikuṇṭha but to go back to…, to be situated in our pure service to Kṛṣṇa. ¶

Prabhupāda: Yes. Pure devotee does not aspire anything—simply to be engaged in loving service of the Lord, wherever it may be. It doesn’t matter. [break] ¶

Jayādvaita: …they know everything and they’re perfect in everything. But sometimes, from our material viewpoint, we see some discrepancies. Just like we think that… ¶

Prabhupāda: Because material viewpoint. The viewpoint is wrong; therefore you find discrepancies. ¶

Jayādvaita: So we should think that we have to be clear. ¶

Prabhupāda: Yes. Ācārya is explained, bhakti-saṁsanaḥ. One who’s preaching the cult of devotional service, he’s ācārya. Then why should you find any discrepancy? ¶

Jayādvaita: Just, we see… For instance, sometimes the ācārya may seem to forget something or not to know something, so from our point of view, if someone has forgotten, that is… ¶

Prabhupāda: That is not the… Then you do not understand. Ācārya is not God, omniscient. He is servant of God. His business is to preach bhakti cult. That is ācārya. ¶

Jayādvaita: And that is the perfection. ¶

Prabhupāda: That is the perfection. Hare Kṛṣṇa. ¶

Jayādvaita: So we have a misunderstanding about what perfection is? ¶

Prabhupāda: Yes. Perfection is here, how he is preaching bhakti cult. That’s all. ¶

Satsvarūpa: Śrīla Prabhupāda, there’s also a question of reciprocation. You have so many disciples, thousands, and one devotee was asking me yesterday, “How does… I want to please Śrīla Prabhupāda. How does he know my progress and my service, because I’m…, when I’m so far away from him and if I don’t write him?” ¶

Prabhupāda: So his representatives are there, the president, the GBC. They will see. ¶

Jayādvaita: The representative may be there, but what is my personal relationship? ¶

Prabhupāda: Hmm? To obey your spiritual master. Whatever he has said, you follow strictly. Follow the regulative principles. Chant sixteen rounds. That’s all. ¶

Devotee (1): Prabhupāda, when Śrīla Vyāsadeva was lamenting after compiling so many Vedic literatures before compiling Śrīmad Bhāgavatam, he said to his spiritual master, Nārada Muni, that “You please enter within me and find out my deficiency. You are as good as the all-pervading Supersoul.” ¶

Prabhupāda: That is always the position of disciple [spiritual master], to find out the deficiency in the character of disciple. ¶

Devotee (1): He said that “You are as good as the all-pervading Supersoul.” ¶

Prabhupāda: Yes. He… He pointed out the deficiency, that “You have not described so elaborately about the Supreme Personality of Godhead. You have touched only the social, religious, political point of views.” That was his deficiency. So a disciple is always in deficiency before his spiritual master. Just like Caitanya Mahāprabhu says, guru more murkha dekhi karila śāśana [Cc. Ādi 7.71]plugin-autotooltip__small plugin-autotooltip_bigŚrī Caitanya-caritāmṛta, Ādi-līlā 7.71

Śrī Caitanya Mahāprabhu replied to Prakāśānanda Sarasvatī, "My dear sir, kindly hear the reason. My spiritual master considered Me a fool, and therefore he chastised Me.: “My spiritual master saw Me a fool number one. Therefore he has chastised Me.” So disciple should be always ready to be chastised. He should not think that he has become perfect. That is perfection. So long he thinks that he is not perfect—he’s to be chastised—then he’s perfect. And as soon as he thinks that he has become perfect, he’s nonsense immediately, nonsense number one. [break] …always to be chastised by the spiritual master for perfection. And if he thinks that now he has become perfect, then he’s a foolish. Caitanya Mahāprabhu said, guru more murkha dekhi: “My spiritual master saw Me a fool number one.” Was He fool number one? He’s God Himself. But that is the position. He should remain always a fool number one, ready to be chastised. Then he’s perfect. In the moral instruction, Cāṇakya Paṇḍita gives this instruction, that lālane bahavo doṣas tadane bahavo guṇaḥ: “If you chastise your, the son or disciple, he’ll improve, and if you say, ‘Oh, you are all right,’ then he’ll degrade.” Tasmāt putraṁ ca śiṣyaṁ ca tāḍayet na tu lalayet: “Therefore you always chastise your son and disciple. Never flat…” What is called? ¶

Satsvarūpa: Prabhupāda, in one purport in the Bhagavad-gītā, you write that a disciple of a bona fide spiritual master is supposed to know everything. ¶

Prabhupāda: Yes, if he follows the spiritual master. ¶

Satsvarūpa: But how could he know…? What does that mean, “everything”? ¶

Prabhupāda: “Everything” means whatever his guru knows, he should know, that much. Not like God, everything. Within his limit, that’s all. If he tries to understand whatever his guru has said, that much is “everything.” Otherwise, “everything” does not mean that we know everything like God, like Kṛṣṇa. That is not possible. If he regularly chants and follow the regulative principles, follow the orders of guru, then he knows everything. That’s all. Not very much. ¶

I am seated in everyone's heart, and from Me come remembrance, knowledge and forgetfulness. By all the Vedas am I to be known; indeed I am the compiler of Vedānta, and I am the knower of the Vedas.. He knows past, present, future—everything. You cannot expect anyone to know like Kṛṣṇa, everything. ¶

Jayādvaita: Kṛṣṇa says in Bhagavad-gītā that one who knows Him knows everything. ¶

Prabhupāda: Yes. Because if he knows that Kṛṣṇa is the Supreme Personality of Godhead, then he knows everything. That’s all. Not that he should know as Kṛṣṇa. If he… Yasmin vijñāte sarvam eva vijñātam… [Muṇḍaka Upaniṣad 1.3] If he accepts Kṛṣṇa, the Supreme Personality of Godhead, the Absolute Truth, then he knows everything. That is finish. ¶

Jayādvaita: That knowledge itself is… ¶

Jayādvaita: That knowledge itself is complete. ¶

Satsvarūpa: There may be material things he doesn’t know, but they’re useless. ¶

Satsvarūpa: If there’s some material information that such a person doesn’t know, that’s not really knowledge anyway. ¶

Satsvarūpa: If he doesn’t know how many people live in… ¶

Jayādvaita: Just like Gaura-kiśora could not write. So it appeared that he did not…, there was something that he did not know, although he knew Kṛṣṇa. ¶

Prabhupāda: Yes. He knows everything. Otherwise, how Bhaktisiddhānta accepted him as guru? He knows Kṛṣṇa. That’s all. ¶

Nalinī-kānta: Whatever the spiritual master says, that is also perfect? ¶

Prabhupāda: Yes. Because he says nothing concocted. Whatever he says, he says from śāstra and guru. ¶

Devotee (2): Śrīla Prabhupāda, is there any instance when you were chastised by your spiritual master? ¶

Devotee (2): Is there any instance when you were chastised by your spiritual master? ¶

Prabhupāda: I remember that moment was very valuable. Yes. ¶

Prabhupāda: Yes. I think I have said that. ¶

Satsvarūpa: When you were speaking to one man… ¶

Prabhupāda: Yes. He became very angry and chastised me. ¶

Jagajīvana: Śrīla Prabhupāda, was this during a lecture by Śrīla Bhaktisiddhānta? ¶

Jagajīvana: Was this during a lecture? ¶

Prabhupāda: Yes. I was not… One of my old brother, he, he wanted to speak something. So I leaned my… I immediately became… [laughter] So he chastised him more than me. ¶

Devotee (2): When Lord Caitanya chastised someone more than Advaita Ācārya, Advaita felt that He had been neglected, ‘cause he had not received a greater chastisement. ¶

Prabhupāda: He wanted to be chastised, so Caitanya fulfilled His desire. [end] ¶