Prabhupāda: ...lower animals. Nobody is starving. Have you seen any bird die of starvation? There are so many hundreds, thousands of birds in this garden.

Devotee: Even in all these countries, Śrīla Prabhupāda, they are always complaining about there are so many starving people. But nobody has ever seen anybody die. 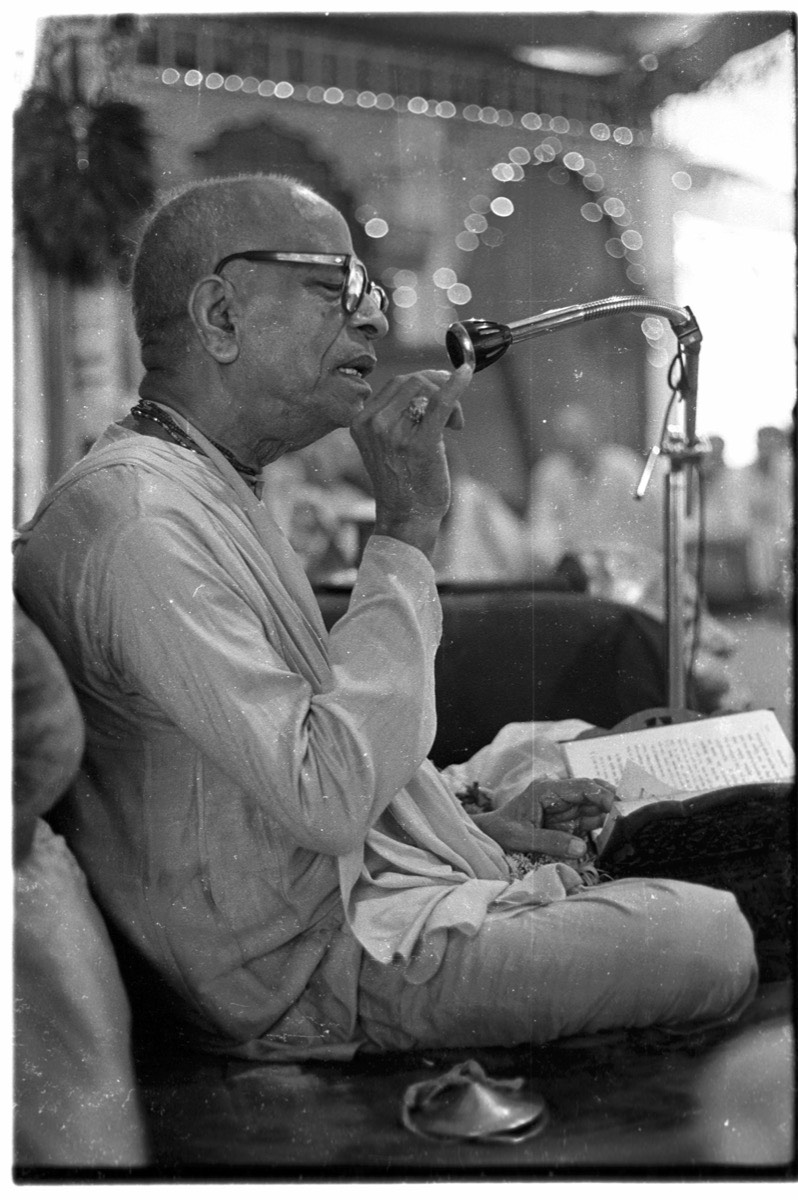 Prabhupāda: …lower animals. Nobody is starving. Have you seen any bird die of starvation? There are so many hundreds, thousands of birds in this garden. ¶

Devotee: Even in all these countries, Śrīla Prabhupāda, they are always complaining about there are so many starving people. But nobody has ever seen anybody die. ¶

Prabhupāda: …of knowledge, not starvation of food. ¶

Vīrabāhu: They even. The modern scientists, they even admit that the body, a human body, is the most perfect machine. They admit this in college. But, like, the same teacher, I heard him saying this, though he says this, he says, “There is no God. This is an invention of the necessity of man.” ¶

Vīrabāhu: No, he says is the most perfect. No one can make something better. ¶

Vīrabāhu: He says because of the fear of dying, one invents God. He saying because one is… ¶

Vīrabāhu: Yes, yes. That was long time ago. ¶

Prabhupāda: Oh, long time ago. You could not answer? ¶

Vīrabāhu: Oh, yes, I was new in the movement. I had two months [indistinct]. ¶

Vīrabāhu: I really don’t know what they will answer. They should be. Sure they are, inside, but they are puffed up. ¶

Hṛdayānanda: They are very much afraid. ¶

Hṛdayānanda: There is one great scientist when I was a student, and he was trying to prove how there was no God, and he was so nervous, sometimes he could hardly speak he was shaking so much. [laughter] ¶

Vīrabāhu: Oh, yes, that is what happens. When one starts speaking of God, they just… ¶

Prabhupāda: So long you have not solved the four prominent miserable condition of life—birth, death, old age and disease—you cannot say there is no God. There is controller who is forcing you to accept these conditions. Therefore there is authority. How you can avoid this? ¶

Vīrabāhu: They say, “Some day. Some day we will do.” ¶

Prabhupāda: Some day, rascal, somebody will come and kick your face with shoes. [laughter] ¶

Hṛdayānanda: Prabhupāda, if we go back this way, we’ll get back around the right time. ¶

Prabhupāda: Why so soon? ¶

Prabhupāda: …accept that they are controlled? ¶

Vīrabāhu: They have many contradiction, because I learned also that… ¶

Vīrabāhu: There was this great scientist. His name is Nernst. He said that this, that everything was infinite, that the universe, everything, was eternal, that this universe was eternal. So he got very mad, very vexed, because another scientist was telling him, was a [indistinct], a young scientist was proving that the universe has a time, a specific time, and it will finish. ¶

Vīrabāhu: But because it didn’t suit to his theories, he said that… ¶