Prabhupāda: That’s all. So, word meaning? 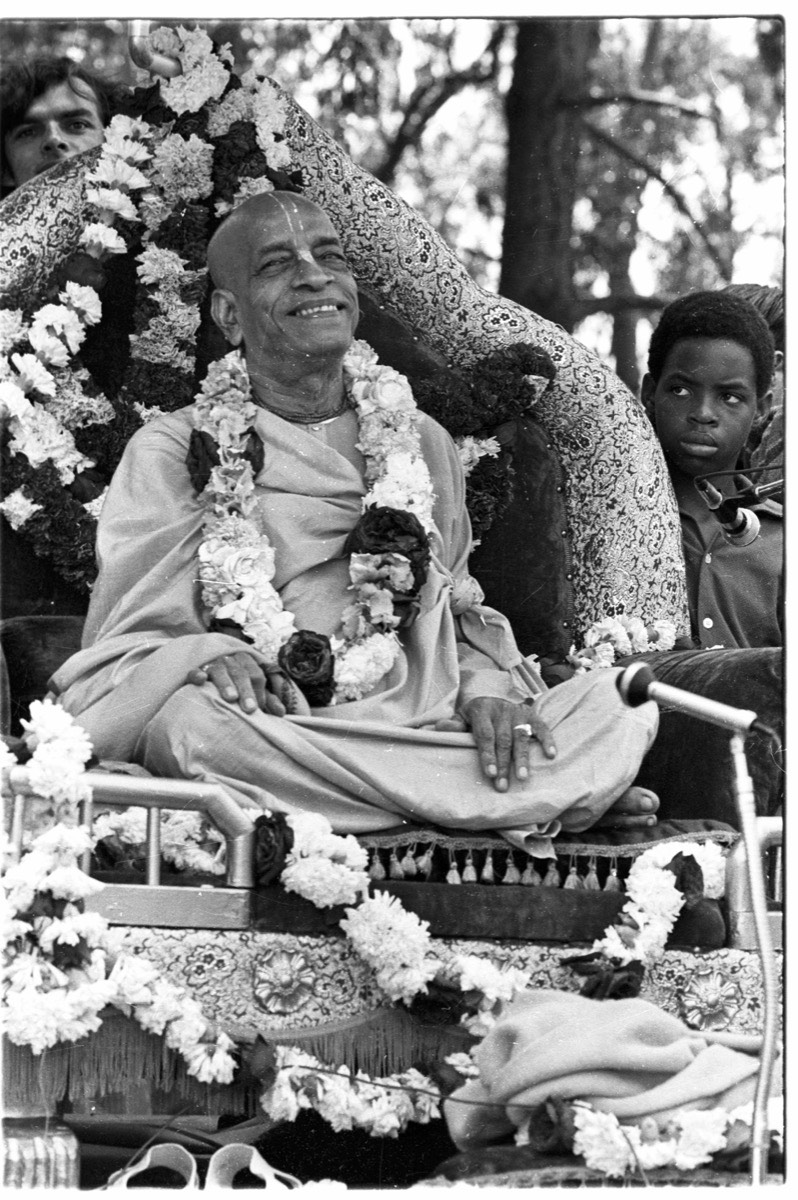 Let my mind be fixed upon Lord Śrī Kṛṣṇa, whose motions and smiles of love attracted the damsels of Vrajadhāma [the gopīs]. The damsels imitated the characteristic movements of the Lord [after His disappearance from the rāsa dance].

Translation: “Let my mind be fixed upon Lord Śrī Kṛṣṇa, whose motions and smiles of love attracted the damsels of Vrajadhāma [the gopīs]. The damsels imitated the characteristic movements of the Lord [after His disappearance from the rāsa dance].” ¶

Pradyumna: “By intense ecstasy in loving service, the damsels of Vrajabhūmi attained the qualitative oneness with the Lord by dancing with Him on an equal level, embracing Him in nuptial love, smiling at Him in joke and looking at Him with a loving attitude. The relation of the Lord with Arjuna is undoubtedly praiseworthy by devotees like Bhīṣmadeva, but the relation of the gopīs with the Lord is still more praiseworthy because of their still more purified loving service. By the grace of the Lord, Arjuna was fortunate enough to have the fraternal service of the Lord as chariot driver, but the Lord did not award Arjuna with equal strength. The gopīs, however, practically became one with the Lord by attainment of equal footing with the Lord. ¶

“Bhīṣma’s aspiration to remember the gopīs is a prayer to have their mercy also at the last stage of his life. The Lord is satisfied more when His pure devotees are glorified, and therefore Bhīṣmadeva has not only glorified the acts of Arjuna, his immediate object of attraction, but also he has remembered the gopīs, who were endowed with unrivalled opportunities by rendering loving service to the Lord. The gopīs’ equality with the Lord should never be misunderstood to be like the sāyujya liberation of the impersonalist. The equality is one of perfect ecstasy, where the differential conception is completely eradicated, for the interests of the lover and the beloved become identical.” ¶

Prabhupāda: So Lord Caitanya Mahaprabhu said, ramyā kācid upāsanā vrajavadhū-vargeṇa yā kalpitā [Caitanya-manjusa]: there is no better method of worship than the system invented by the gopīs. So gopīs’ invention of worshiping Kṛṣṇa was to remain always Kṛṣṇa conscious, without any material profit. That is the superexcellence of gopīs. They never expected any return from Kṛṣṇa. That was not their business. “Kṛṣṇa, we have done so much for You, You cannot give me this benediction?” No, they never asked like that. That is the first-class worship. “Kṛṣṇa, You take whatever You like from us, but we do not ask anything, neither we have any need.” This is gopīs’ worship. “We have got everything to give You, and we have no need to ask You.” This is gopīs’ worship. ¶

Generally, they worship God, needy, ārtaḥ arthārthī. Ārtaḥ means diseased, arthārthī means in need of money. People generally go to church, temple, when they are suffering from some ailments or need of money, these two classes. Another two classes: jijñāsuḥ, jñānī. Jñānī means who is after pure knowledge, and jijñāsuḥ means inquisitive—what is the nature of God. These are…, they are higher section. But they are not bhaktas. Just like there are many philosophers, they also talk of God, but they are not bhaktas. But because they are talking of God, they are getting some benefit. Just like if you handle with fire, you perceive some warmth automatically. ¶

So these four classes of men, they are not bhaktas, devotees—ārtaḥ, arthārthī, jñānī and jijñāsuḥ. But because they come to Kṛṣṇa for some benefit, some way or other they offer their service, because praying is also another service. There are nine kinds of services: śravaṇaṁ kīrtanaṁ viṣṇoḥ smaraṇaṁ pāda-sevanam, arcanaṁ vandanam [SB 7.5.23]plugin-autotooltip__small plugin-autotooltip_bigŚrīmad Bhāgavatam 7.5.23-24

Prahlāda Mahārāja said: Hearing and chanting about the transcendental holy name, form, qualities, paraphernalia and pastimes of Lord Viṣṇu, remembering them, serving the lotus feet of the Lord, offering the Lord respectful worship with sixteen types of paraphernalia, offering prayers to the Lord, becoming His servant, considering the Lord one's best friend, and surrendering everything unto Him (in other words, serving Him with the body, mind and words)—these nine processes are accepted as pure devotional service. One who has dedicated his life to the service of Kṛṣṇa through these nine methods should be understood to be the most learned person, for he has acquired complete knowledge.. Vandanam, this is also service. But because this service is rendered for some motive to mitigate the sufferings, ārtaḥ arthārthi, or to satisfy some inquires, they are not pure devotion. ¶

So the gopīs’ activities, they are the supreme platform of pure devotion. There is no other business. There is no other business. Gopīs, they are not interested to know philosophically whether Kṛṣṇa is God, although they are seeing every step Kṛṣṇa is God. Mother Yaśodā is seeing that Kṛṣṇa is God. Gopīs also, gopī-jana-vallabha giri-vara-dhārī [Jaya Rādhā-Mādhava]. Kṛṣṇa is lifting the Govardhana Hill. Who can do it except God? They are seeing it; still they do not know that Kṛṣṇa is God. “Kṛṣṇa is wonderful,” that’s all. They do not like to know whether Kṛṣṇa is God or not. They want to love Kṛṣṇa. Kṛṣṇa may be God or not God, it doesn’t matter. ¶

Just like if you love somebody, what he is—he is rich man, poor man, educated or non-educated—there is no consideration. Love has no such thing, consideration. Similarly, gopīs’ love for Kṛṣṇa was pure. There was no consideration that Kṛṣṇa was God, therefore they wanted to dance with Him. No. Kṛṣṇa wanted to dance with them, therefore they came to Kṛṣṇa. Kṛṣṇa is now calling by the vibration of His flute at this dead of night. So, all these young girls, they are all married—some of them are mothers—so immediately left their home. That is described in the Śrīmad-Bhāgavatam. Some of them were cooking, some of them were feeding, breast-feeding the children, some of them were feeding the husband or the father. ¶

In this way, everyone was engaged. But as soon as Kṛṣṇa’s flute was heard at dead of night, they left home immediately. All the guardians… Generally in India for young girls, the guardians are the father, the husband, the brother—all male members—they forbid, “Where you are going? Where you are…?” Nobody cares. No love for so-called children, no love for home, no love for brother, father, or no respect. Kṛṣṇa. That is gopīs’ superexcellence. ¶

So that is being explained, and Bhīṣmadeva, at the point of his death, he is relishing. These are to be learned. Unless we are practiced to think of Kṛṣṇa always, how at the time of death we can think of? Therefore Kulaśekhara says, ¶

Mahārāja Kulaśekhara, king, a great devotee, is praying to Kṛṣṇa, “Kṛṣṇa, this is the opportune time. Now I am healthy. I am quite in good health, so let me die immediately, thinking of You. Because my whole purpose is to think of You, of Your pastimes, at the time of death.” So generally, at the time of death, kapha-vāta-pittaiḥ, the whole system becomes disarranged. There are coughing, there are headache, there is some pain. This is general system. Sometimes they are so intolerable that the man who is going to die, he cries. The system within the body is so complicated that at any time it can be disarranged, and it becomes a great source of pain. ¶

So, at the time of death means the arrangement becomes so dangerously painful that one leaves this body: “No more.” This is death. This bodily arrangement becomes so painful. Just like one commits suicide. When the situation is too much painful he wants to rescue by committing suicide. Similarly, when the bodily pains are too severe, then the living entity cannot live in this body. Tyaktvā deham: he gives up this body. So we have to give up this body. That we forget. ¶

People have become so misguided, they are memorizing. In our country, some astrologer has said that one big politician, he has become one of the two dogs in Scandinavia. Now here, for this material body, they have erected museum and statues, and being worshiped by so many methods, but the spirit soul—which was the politician actually, not this body—he has taken birth as a dog. This is their mistake. Where the politician has gone and how, what he is doing, they do not know. But they are concerned with the body. ¶

…that “One man is drowned, and another brave man comes—‘I’ll save him.’ ” So he jumps over the water and brings the coat and shirt: “Now this man is saved.” So what people will say? “What a nonsense he is. He has brought his coat and shirt, and the man is saved?” Similarly, these rascals, they are dealing with the coat and shirt of the living entity, but they have no knowledge in the university or anywhere where the soul has gone. These rascals have no knowledge. They are simply concerned with this external body. ¶

Those who are interested only with this external body… Not those who are. Ninety-nine percent population, they are interested in this bodily concept of life. Perhaps we are the only institution in the world which is teaching that you are not this body. This is the wonder of Kṛṣṇa consciousness movement. We are the only institution throughout the whole world that we are teaching people that “My dear sir, you are not this body. You are different from the body, and after death you get another body.” ¶

As the embodied soul continually passes, in this body, from boyhood to youth to old age, the soul similarly passes into another body at death. The self-realized soul is not bewildered by such a change.. Simple education in the Bhagavad-gītā, they do not understand. There are big, big scholars, rascals, all rascals. Our difficulty is these rascals are going on as scholar, dehātma-buddhiḥ. Their life is bodily concept of life, and they are passing as scientist, scholars, leaders, politicians, and they are leading us andhā yathāndhair [SB 7.5.31]plugin-autotooltip__small plugin-autotooltip_bigŚrīmad Bhāgavatam 7.5.31

Persons who are strongly entrapped by the consciousness of enjoying material life, and who have therefore accepted as their leader or guru a similar blind man attached to external sense objects, cannot understand that the goal of life is to return home, back to Godhead, and engage in the service of Lord Viṣṇu. As blind men guided by another blind man miss the right path and fall into a ditch, materially attached men led by another materially attached man are bound by the ropes of fruitive labor, which are made of very strong cords, and they continue again and again in materialistic life, suffering the threefold miseries.. They are blind, and they are leading us, so we have…, we are also put into difficulty. ¶

So only this Kṛṣṇa consciousness movement can save the human civilization and get him raised to the platform of the gopīs. We have got such nice thing, these gopīs’, unalloyed Kṛṣṇa love. That is wanted. ¶