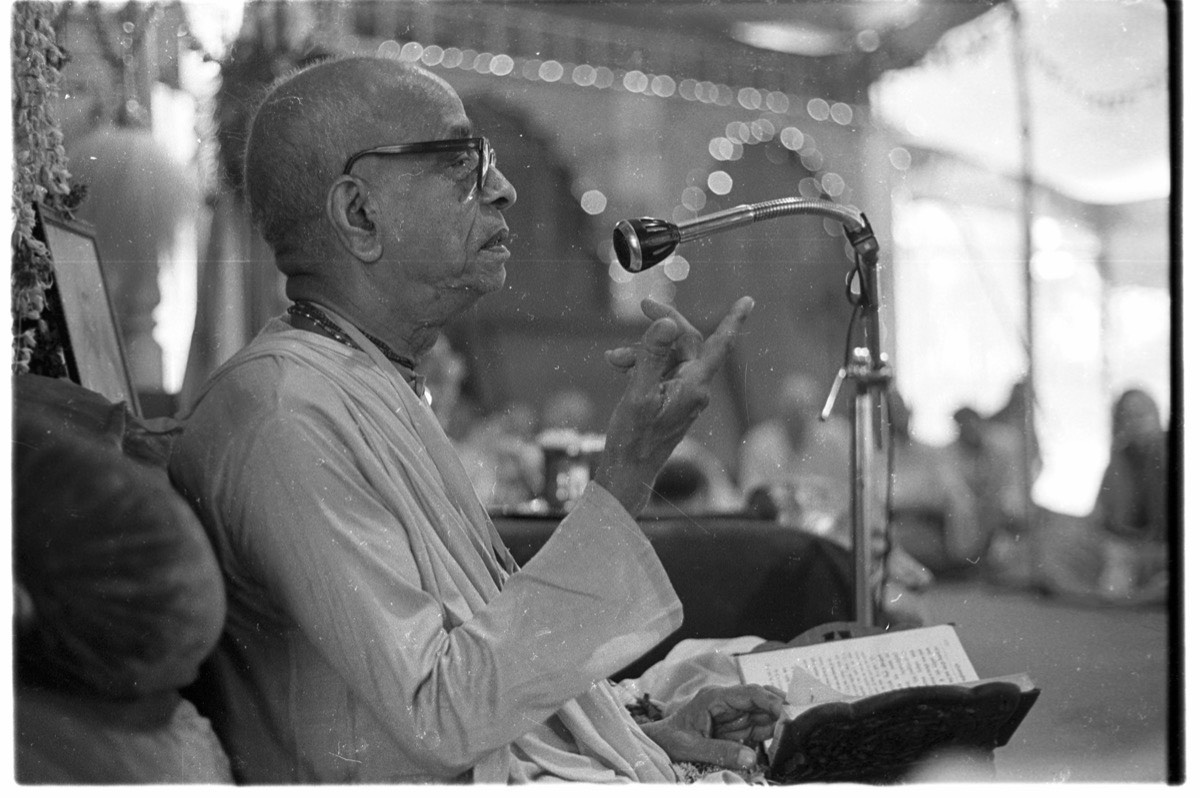 Those persons who are materially engrossed, being blind to the knowledge of ultimate truth, have many subject matters for hearing in human society, O Emperor.

Translation: “Those persons who are materially engrossed, being blind to the knowledge of ultimate truth, have many things as subject matter for hearing in the human society, O Emperor.” ¶

Prabhupāda: So, apaśyatām ātma-tattvaṁ, apaśyatām, a means not, paśyatām refers to one who sees, so apaśyatām means one who cannot see. Who are they? Gṛheṣu gṛha-medhinām, gṛheṣu at home, in this verse, gṛheṣu at home… gṛha-medhinām, gṛha-gṛhamedhī means, animals also actually, there are human beings living with husband, wife, children but living like animals therefore gṛhamedhī. And then there is gṛhastha, gṛhastha means those who are living at home and exactly like others, brahmacārī or vānaprastha or sannyāsī. According to these divisions there are four divisions of social order and four divisions of spiritual order, eight. ¶

Everybody, just like our spiritual method we are also, we are women, children, men but the purpose is different. In this temple the children are being trained up for spiritual understanding. The women [indistinct] of our society they are also there but their aim is spiritual understanding that is the difference and the same thing in next house they are also living with husband, wife, children but their aim is different. That is the difference between gṛhamedhī and gṛhastha, there are two words. There is no difference between the husband, wife, children, friends but everything is all right provided there is Kṛṣṇa consciousness. Therefore Bhaktivinode Ṭhākura says kṛṣṇe [indistinct]. ¶

Therefore Bhaktivinode Ṭhākura he was a gṛhastha he was living, he was magistrate, he was living with his wife, children, family but at the same time he was interested in spiritual cultivation of life. Regularly when he was a magistrate, so he used to come back home at 5 o’clock then immediately he would take some food after one hour reading and go to bed for the evening. And he would rise up at 12 o’clock at night and used to write books from 12 o’clock up to 4 o’clock that is [indistinct] So he was a gṛhastha, very responsible post, government officer, magistrate but his life was dedicated for spiritual cultivation he is ideal gṛhastha. All Caitanya Mahāprabhu’s associates [indistinct] ¶

All of them were gṛhasthas, family men, Caitanya Mahāprabhu himself was married twice. His first wife died, he married for the second time so to become a householder is not [indistinct] if we understand. Whether one is a householder or in the renounced order the aim is just how we can become Kṛṣṇa conscious. ¶

So here one distinct word is used, gṛheṣu gṛha-medhinām, gṛhamedhī maybe later on this word means [indistinct] and at the same time envious. So gṛhamedhī they are envious [indistinct] it is very specific in your country. There is sign board, “beware of the dog.” That means he is envious because [indistinct] if any outsider will come, the outsider is also envious. So they are living in the house but envious so much but so far our fence is concerned we don’t keep a signboard, “beware of the dog don’t come here.”Please come, that is the difference. We are living within these four walls, home for our householder’s home, but the difference is that we are not envious [indistinct]. Just try to see the distinction between gṛhamedhī and gṛhastha [indistinct] ¶

If one is complete in knowledge about Kṛṣṇa what is there to be envious of others? We welcome others because our distinction is these people have forgotten, apaśyatām ātma-tattvaṁ [SB 2.1.2]plugin-autotooltip__small plugin-autotooltip_bigŚrīmad Bhāgavatam 2.1.2

Those persons who are materially engrossed, being blind to the knowledge of ultimate truth, have many subject matters for hearing in human society, O Emperor.. Those who are envious and living very decently with car, with nicely decorated home, wife, children but at heart they are so polluted they are envious, don’t come here [indistinct] all. This is called gṛhamedhī and gṛhastha means they are also living with husband, wife and children but they are anxious that people will come and will hear about God. ¶

That is their tendency, they will give us, they are not envious, that is the distinction between gṛhastha and gṛhamedhī. And why one becomes gṛhamedhī that is also explained, apaśyatām ātma-tattvaṁ, they are blind about self-realisation, their only aim is to live very comfortably. Of course there is no comfort but they think there is a comfortable position because always one who is envious he cannot be comfortable because his heart is always foggy, [indistinct]. ¶

But that is actually [indistinct] but superficially it appears they are trying to [indistinct] ātma-tattvam, they may think that they will live for 50 years, or 30 years but every year, but after this life is finished therefore let us utilise this body for sense gratification as much as possible because there is no life after death according to their philosophy. I have talked with many big big professors in Europe, they also do not know that there is life after death. They are so blind but they are passing on as big big scientists, philosophers, so on, and they are teaching people. So what people will learn? ¶

As the embodied soul continually passes, in this body, from boyhood to youth to old age, the soul similarly passes into another body at death. The self-realized soul is not bewildered by such a change.