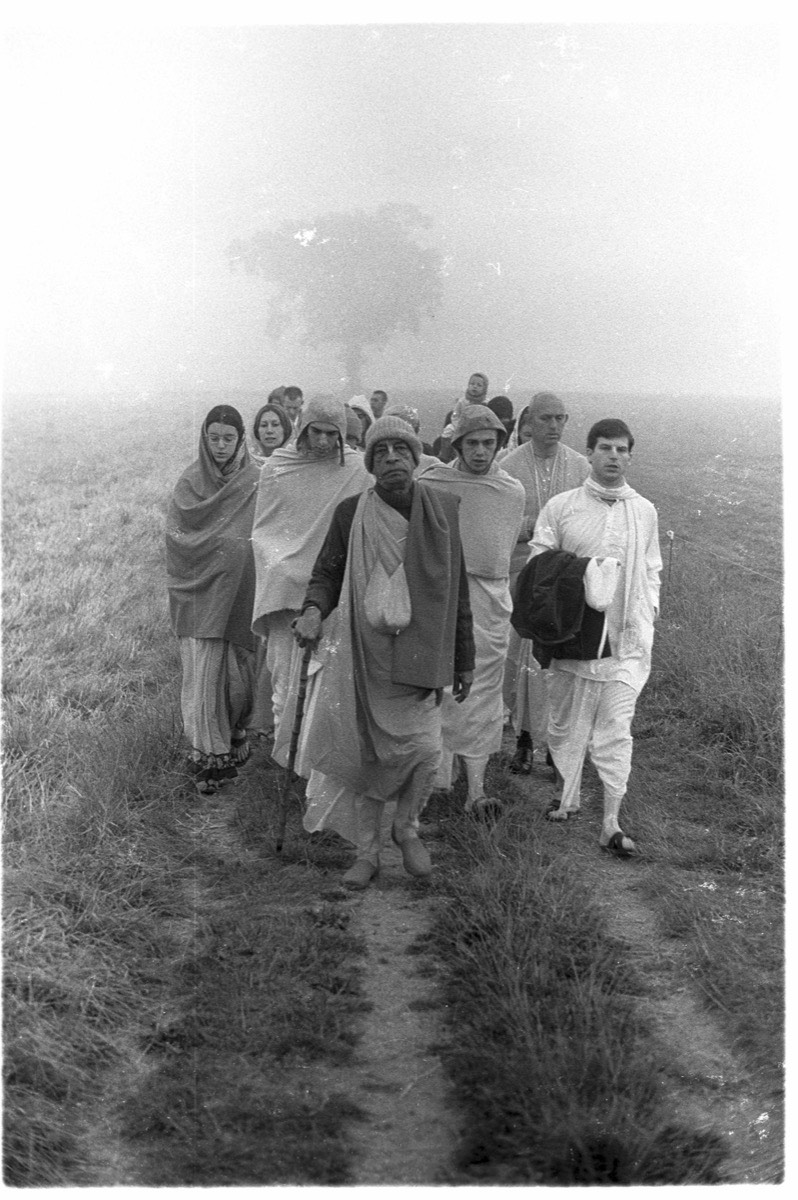 Prabhupāda: Go on. Why not [indistinct]? ¶

Translation: “One day, after finishing their morning duties by burning a sacrificial fire and respectfully offering a seat to Śrīla Sūta Gosvāmī, the great sages made earnest inquiries about the following matters.” ¶

Prabhupāda: So as we observe higher supreme [indistinct], this ceremony was held daily in the morning. That is Vedic system. There is a section of Hindus, they are called Ārya-samājīs, they do it regularly in the morning; not exactly in the way, but they observe this fire ceremony daily, morning. So not only the sages, even gṛhastas, higher caste, they are also holding that ceremony, agni-nirvāpaṇad-va[?]. So the system was very strict and exact. It was not taken up by anyone, but followed. Anyone can follow the regulation—there is no difficulty—but they do not like to do. ¶

While walking on the park, you see so many people unnecessarily sleeping. Not only in the park, in apartment also. Might be night-keeping, for unnecessary engagement, but according to the Vedic system everyone should rise early in the morning before four o’clock. In India there is regular seasons also. Not like this country, that during summer the night begins at half-past ten and in the winter the morning begins at half-past ten, here. But in India, regularly the sun rises in the morning round about five, regularly, either in the winter season or in the summer season, round about five. Maybe half an hour, one hour difference. Not one hour; half an hour. ¶

So the Indian public still, even they are not very educated, because the culture is there in, especially in the villages, they rise early in the morning and take bath. They go to the field for easing themselves, and after doing that they take bath either in the river or in the well. In the villages there is no tap water, and by nature in the morning either the river or the well water is very warm. With the advance of day, it becomes cooler, but early in the morning, those who are accustomed to take bath early in the morning, and because India is tropical country, it is not so cold. So that is the system. And after taking bath, in the temple there will be maṅgala-ārati and other ceremonies. One of the ceremonies is this prātar huta-hutāgnayaḥ, holding the fire ceremony. ¶

So munayaḥ, ṛṣaya. Here it is said then, ta ekadā tu munayaḥ. They were… Munayaḥ, generally they are high caste, brāhmaṇa. So regularly this principle was being observed, and the speaker, Sūta Gosvāmī, was given with due respect the vyāsāsana. Here it is said sat-kṛtaṁ. Sat-kṛtaṁ means “with due respect.” With the welcoming, receiving, sat-kṛtaṁ sūkham āsīnaṁ. The speaker must sit very comfortably, sukham āsīnaṁ. Sukham means happiness. He should not feel any inconvenience; then the speaking will go on nicely. Sat-kṛtaṁ sutam āsīnaṁ papracchur. ¶

Prabhupāda: Yes, this is very important thing; therefore we are insisting everyone to rise early in the morning. But even though sometimes we rise early in the morning, we compensate in other time. [laughter] [chuckles] This should be practiced, you see—reducing eating, sleeping, mating; there is spiritual advancement. This is the test. The more you reduce, the ideal is to bring it to nil. Just like Gosvāmīs, they did it. Nidrāhāra-vihārakādi-vijitau [Śrī Śrī Ṣaḍ Gosvāmy Aṣṭaka], they conquered over sleeping and eating and mating. Conquered over. ¶

So our ideal is we are fighting with māyā, and so the fighting will conquer over māyā when we see that we are not disturbed by these four processes: eating, sleeping, mating and defending. This is the test. Nobody has to take certificate from anyone as how he is spiritually advancing. He can test himself: “How far I have conquered over these four things: eating, sleeping, mating and defending.” That’s all. That is the test. So it is not required that don’t eat, don’t sleep, don’t…, but minimize it. At least regulate it. Try. This is called austerity, tapasya. I want to sleep, but still I shall regulate it. I want to eat, but I must regulate it. I want sense enjoyment, so I must regulate it. That is old Vedic civilization. ¶

Pradyumna: “The great sages offered the speaker of the Bhāgavatam an elevated seat of respect called the vyāsāsana, or the seat of Śrī Vyāsadeva.” ¶

Prabhupāda: Vyāsāsana means… Vyāsa means guru, because he is our original guru. When spiritual master’s birthday is observed, it is called Vyāsa-pūjā. This Vyāsa-pūjā means a spiritual master is representative of Vyāsa. Just like we are teaching this bhāgavat-dharma, the Śrīmad-Bhāgavatam, we are following the footsteps of Vyāsadeva. So actually the preacher’s seat is Vyāsadeva’s āsana. ¶

It is the seat of Vyāsa. Just like in the high court the seat, the seat of judgment, or…, what is called? That seat, nobody else can sit there, in that seat. Only the high-court judge, representative of king or giving law to the citizens, he can sit down. Similarly, the vyāsāsana is occupied by the representative of Vyāsadeva, who can speak on behalf of Vyāsadeva. This is the system. ¶

But in this age there is no guarantee whether we are going to live up to sixty years old age. So sometimes, younger generation also offered sannyāsa, because Caitanya Mahāprabhu accepted at the age of twenty-four years. We are not of course imitating Caitanya Mahāprabhu, but for executing Caitanya Mahāprabhu’s mission, if we are sincerely working for Him, then we can take sannyāsa at an early age. That… When one is actually a sannyāsa, a sannyāsī, master of the senses, he can be addressed as gosvāmī or svāmī. ¶

Pradyumna: “The gosvāmīs do not deliver lectures on the Bhāgavatam capriciously. Rather, they execute their services most carefully, following their predecessors, who delivered the spiritual message unbroken to them. Those who listen to the Bhāgavatam may put questions to the speaker in order to elicit the clear meaning, but this should not be done in a challenging spirit. One must submit questions with a great regard for the speaker and the subject matter. This is also the way recommended in the Bhagavad-gītā. One must learn the transcendental subject by submissive aural reception from the right sources. Therefore these sages addressed the speaker Sūta Gosvāmī with great respect.” ¶

Prabhupāda: The next verse. ¶

Prabhupāda: That’s all. Anyone can recite? ¶

Now, this purāṇāni setihāsāni… These Purāṇas… You know, first of all there is the Veda. Originally the Veda, Atharva Veda, that is divided now into four: Sāma, Yajur, Atharva, Ṛg. Then all the Vedic instructions are, what is called, creamed, concentrated in the Vedānta-sūtra, in one. The Upaniṣads, there are 108 Upaniṣads, and many others. ¶

All the knowledge is concentrated in the Vedānta-sūtra, or Vedānta philosophy. Then again, it is explained for common man by purāṇāni, by Purāṇas. Just like this Purāṇa, this is Bhāgavata Purāṇa. Bhāgavata is also Purāṇa. Purāṇa means “old,” old history, purāṇa; and itihāsa means history. But Vedic civilizations were concerned the historical evidences which were very, very important. ¶

Every day so many things are happening, or every year. So that was not the process. Just like autobiography or life. Nobody used to write autobiography. But the life of great kings, sages, saintly person, they are recorded in the Itihāsa. So Sūta Gosvāmī, he is addressed, “Sir.” ¶

Dharma-śāstra. In the Vedic civilization, there are twenty big, big books, dharma-śāstra, for regulating life. Many difficult subject matter, dharma-śāstra. So Sūta Gosvāmī was offered the seat of vyāsāsana because he was aware of these things, Itihāsa, history; Purāṇas, still older history; dharma-śāstra, the scriptures; everything. Therefore he is first of all addressing that “You have read. Not only have read, but you have described.” ¶

Description means you read something; unless you fully assimilate, understand, you cannot describe it. The two things. Simply reading will not help us. When we shall be able to preach the reading matter, doesn’t matter whether in the same language or in my own language; it doesn’t matter. That is wanted. Ākhyātāny adhītāni. Adhītāni means, “You have read and you have explained.” ¶

In this way the Śaunaka Ṛṣi… There are thousands of ṛṣis in Naimiṣāraṇya. When you go to India, you must see this place, Naimiṣāraṇya. It is very, very old place, at least from historical point of view. Modern history, it is five thousand years old, because the first Bhāgavata discussion took place there, after instruction of Vyāsadeva. ¶

So in India there are many places very suitable for spiritual advancement. Still they are existing from the very, very old times, historical time. So the Itihāsa, Itihāsa means history, and purāṇāni, purāṇāni means old Itihāsa. All the statements or narration described in the Śrīmad-Bhāgavatam, they are all historical evidences. They are not imagination. Sometimes the so-called scholars and ṛṣaya students they say it is fancy or something imagination. No. They are all history. It is said here, Itihāsa. Itihāsa means history. ¶

Prabhupāda: It is supplement, because Vedic language is so difficult. It is sometimes very difficult to understand. So Purāṇa, another meaning of purāṇa means “supplement.” So they are explanation of the Vedic knowledge in a supplementary way by taking references from the history, from the life of great saints and sages. So they’re adding, addition, addendum. ¶

Go on. The Māyāvādī philosophers, they say that the Purāṇas are not Vedas. That is not the fact. Here in the Bhāgavata it says the Purāṇa is part of the Vedas, as Upaniṣad is part of Vedas. It is written in simplified language so that those who are less educated, less, I mean to say, having brain substance… ¶

He must have the qualification. So when one is simply proud of his high parentage, he is called dvija-bandhu. There are many instances. Just like in this country also, British nation was very powerful nation, but at the present time it is different. So simply by taking birth in England one cannot be proud. Your forefathers were very enthusiasting, colonize. So at the present moment that is not followed. ¶

So I request you, all English boys and girls present here: now you become greater than your forefather by taking this Kṛṣṇa consciousness. That will make you more powerful, spiritually powerful. You can render service to the humanity, to your, I mean to say, family, your nation. It is so nice. Try to understand. Everyone, every human being should try to become very important. That importance can be achieved by culture, not by simply, “I belong to this nation,” “I belong to this family,” “I am son of such big father.” No. You must be also qualified. ¶

Formerly this Vedic literature was not in written pages. As soon as one will hear from… Just like Sūta Gosvāmī, there is no question of taking note. As soon as they will hear, they will immediately get it in the memory. They will never forget. The memory was so sharp. At the present moment, our memory is so low-graded we cannot remember even what I have done two hours past. So this is Kali-yuga. We are in so many degraded position; still falsely we are proud that we are advancing. Not that. It is false prestige. Actually you are very, very much degraded. ¶