Prabhupāda: Yes. [break] ...this cemetery of dog, one becomes dog. Yes, that is stated. 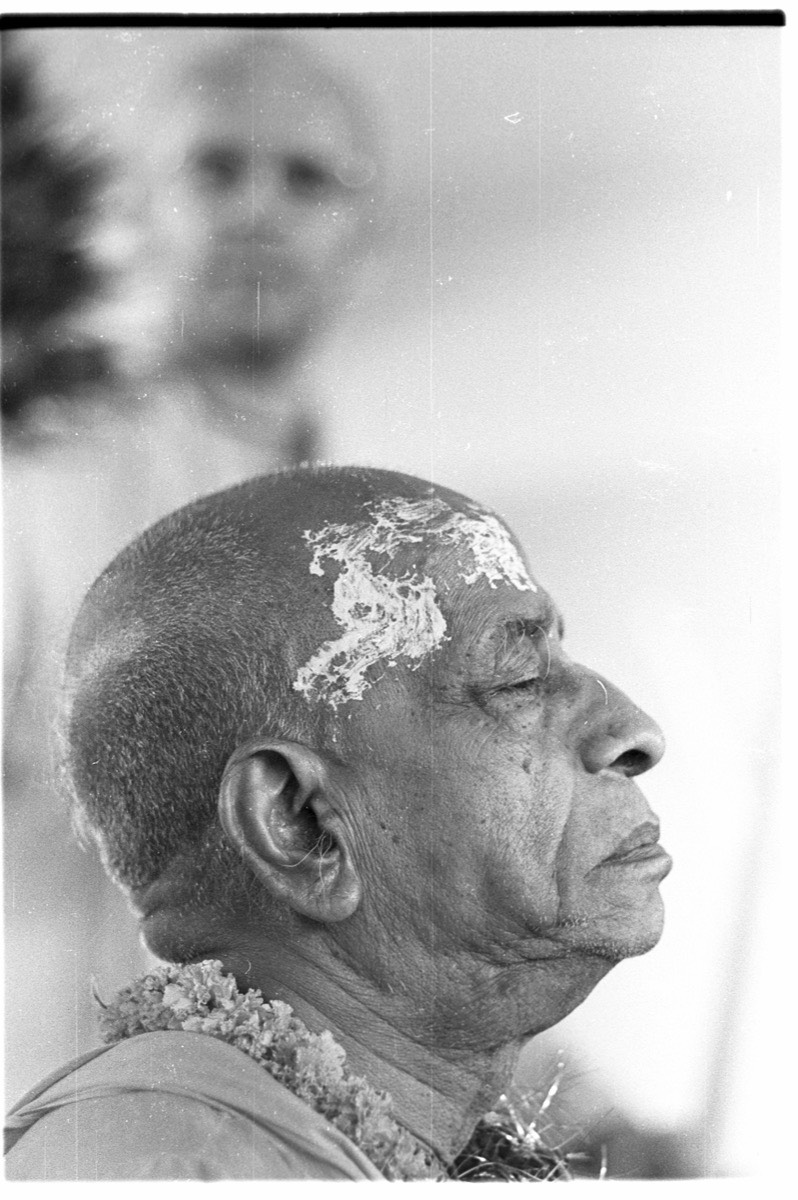 Prabhupāda: Yes. [break] …this cemetery of dog, one becomes dog. Yes, that is stated. ¶

Devotee (1): Māyāvādīs, they say you can worship anything and it is all the same? ¶

Devotee (1): Do the Māyāvādīs say you can worship anything and it is all the same? ¶

Prabhupāda: Yes. [chuckles] That is their nonsense. Kṛṣṇa says different thing, but they have manufactured their own way. Is that a temple? ¶

Prabhupāda: It appears as church? It is a church? ¶

Devotee (1): Yes. I do not know what kind. Christian church. [break] ¶

Ātreya Ṛṣi: Kṛṣṇa has endowed California with a lot of natural beauty. ¶

Ātreya Ṛṣi: Every… All the year round there is nice flowers and green. ¶

Prabhupāda: And you know how to utilize them. Therefore, Kṛṣṇa has given you this land. Now utilize it and develop Kṛṣṇa consciousness. It will be heaven. ¶

Ātreya Ṛṣi: Jaya. We could have an idea like you have in India on the beach for rich people to come and learn Kṛṣṇa consciousness. ¶

Ātreya Ṛṣi: Like Bombay. Such an idea, it would be very nice here for all the rich—artists, intelligent people, everybody—to come and rest and learn Kṛṣṇa consciousness. ¶

Prabhupāda: Let them learn there and implement the idea here. The whole city, whole country will be glorified. ¶

Ātreya Ṛṣi: On the West Coast, it would be very nice if we had some cow protection. ¶

Prabhupāda: These people must stop this cow killing, the greatest sin. They should divert their tendency for happiness differently than by killing and drinking. ¶

Devotee (1): They are thinking they cannot live without eating cows. ¶

Devotee (1): They think they cannot live without eating cows. ¶

Prabhupāda: They do not know. We can…, we can teach them how to get better vitaminous foodstuff from cow’s milk. Yes. Let the cow live, and she supplies her blood in the form of milk, and you take vitaminous foodstuff from milk. That is civilization. Milk is also cow’s blood. But take this blood in a humanely way, not by killing. Milk is nothing but blood of cow. Suppose if you kill one cow, you get blood how much, how many pounds? ¶

Prabhupāda: No, just guess, how many pounds’ blood you can get? ¶

Prabhupāda: Fifty pounds. But if you keep the cows, you get thirty pounds daily. This is intelligence. Instead of getting once fifty pound and finished, why don’t you get it daily thirty pounds? ¶

Ātreya Ṛṣi: We have to set the example, Prabhupāda, through your mercy. ¶

Prabhupāda: Yes. This is foolishness. Just like one has got some money, he utilizes his money and gets daily some income. And if he wants to spend all at once, that is foolishness. ¶

Ātreya Ṛṣi: Mass killing. That is… They have factories where they can produce thousands of animals very quickly. Quickly they inject certain vitamins and so on in the animal, so that they become fat very fast for mass killing. ¶

Prabhupāda: How they can produce thousands of animals? ¶

Ātreya Ṛṣi: They’re producing animals in the laboratories, not with… They’re not producing; they are utilizing nature’s way, but they don’t let the animals see the green and the grass or the outside. They keep them in the barn, just keep feeding them. ¶

Prabhupāda: I don’t think it is possible. It is simply imagination. ¶

Ātreya Ṛṣi: It’s the cows which are producing each other, it’s not the man that is producing. But they artificially try to make ‘em fat fast. ¶

Prabhupāda: And what is the harm if they live? ¶

Prabhupāda: There is enough grass. ¶

Devotee (1): Someday we will put on a nice Hare Kṛṣṇa festival here in this park. ¶

Prabhupāda: We shall park here? No? ¶

Prabhupāda: Or inside? ¶

Devotee (1): We could walk for some time, walk along the beach. ¶

Prabhupāda: …forgetfulness of Kṛṣṇa. When there is Kṛṣṇa consciousness, it is no longer material. That is spiritual. ¶

Ātreya Ṛṣi: Those of us who have been blessed by your teachings, we still…, we still are conditioned to forget Kṛṣṇa. It’s very painful when we forget. I know myself, I am still a rascal. It’s very difficult when I forget. [break] ¶

Prabhupāda: It is your duty to give protection. ¶

Devotee (1): When he was very small, he came back from the temple one Sunday chanting and dancing, and finally we went to see what it was. [break] ¶

Prabhupāda: …the brain of Einstein. ¶

Ātreya Ṛṣi: Brain of who? ¶

Ātreya Ṛṣi: Well, the way they’re doing it is through the genetic. Yes. ¶

Prabhupāda: Whatever it may be, they are trying… ¶

Prabhupāda: …to make a Xerox copy. So why not the original? ¶

Prabhupāda: Explain to him. ¶

Ātreya Ṛṣi: Why not the original? ¶

Prabhupāda: Yes. The scientists, they are trying to make a Xerox copy of Professor Einstein. So why not the original? Hmm? What is their answer? ¶

Prabhupāda: No, that’s all right, but let them make one original. ¶

Śyāmasundara: They can’t even begin. ¶

Śyāmasundara: They can’t even make a cell. ¶

Prabhupāda: Then what is their credit? ¶

Śyāmasundara: They have made a computer. ¶

Śyāmasundara: They have made a computer, but it takes a human being to program the computer. ¶

Prabhupāda: So what is their credit? If you simply copy something, that is not credit. The credit should go to the original. ¶

Ātreya Ṛṣi: The scientists admit that there is nothing new that they can make. Everything is the manipulation of the laws of nature. ¶

Śyāmasundara: Like that man said last night, “We will do it.” ¶

Ātreya Ṛṣi: They choose to ignore it. ¶

Prabhupāda: Even if you do that, the already one who has done it, why don’t you give Him credit? ¶

Śyāmasundara: Yeah, instead of being envious. ¶

Those who are envious and mischievous, who are the lowest among men, are cast by Me into the ocean of material existence, into various demoniac species of life.. They are envious, rascal. Envious means rascal. That is material quality. And spiritual quality means to praise good quality: “Oh, you are so nice, you have got so good quality.” That is spiritual. And enviousness: “Oh, this man is surpassing me. All right, I…” ¶

Śyāmasundara: Cut him down. ¶

Completely rejecting all religious activities which are materially motivated, this Bhāgavata Purāṇa propounds the highest truth, which is understandable by those devotees who are fully pure in heart. The highest truth is reality distinguished from illusion for the welfare of all. Such truth uproots the threefold miseries. This beautiful Bhāgavatam, compiled by the great sage Vyāsadeva [in his maturity], is sufficient in itself for God realization. What is the need of any other scripture? As soon as one attentively and submissively hears the message of Bhāgavatam, by this culture of knowledge the Supreme Lord is established within his heart.. ¶

Śyāmasundara: Last night you said that that man’s claim was like a poor man saying, “Yes, I’ll become a millionaire.” ¶

First of all you become millionaire, then ask the respect. They want the credit beforehand. “Trust no future, however pleasant.” Why shall I believe you? ¶

Śyāmasundara: There’s a lake over there. There’s a pond. We can walk down there. ¶

Prabhupāda: Oh, bridge we are not going to cross? All right then. ¶

Ātreya Ṛṣi: Every time they find something new they should be glorifying Kṛṣṇa. ¶

Ātreya Ṛṣi: It’s all there. ¶

Śyāmasundara: These are all peach trees. ¶

Prabhupāda: Oh. You have made this nice park, but with the help of God, who has created all these trees. You cannot do that. This means that you try to help or cooperate with God, then your credit is all right. ¶

Ātreya Ṛṣi: Does this remind you of Vṛndāvana, Prabhupāda? ¶

Prabhupāda: Vṛndāvana is different. This is man-made. ¶

Devotee (2): Is this like Dvārakā, when Kṛṣṇa was living in Dvārakā; they had… ¶

Prabhupāda: Yes, Dvārakā, yes. Vṛndāvana trees are all full of fruits and flower. These are for fuel, these trees. ¶

Prabhupāda: That’s all. For burning. There is no fruits and flower. [pause] [break] ¶

Śyāmasundara: …come on shore and get drunk and make trouble. They have their own police. ¶

Prabhupāda: Military has their own police. ¶

Prabhupāda: They are so pious and advanced in civilization, the students require police. [laughter] The dean has publicly request police, and still they are very much proud of advancement. ¶

All the demigods and their exalted qualities, such as religion, knowledge and renunciation, become manifest in the body of one who has developed unalloyed devotion for the Supreme Personality of Godhead, Vāsudeva. On the other hand, a person devoid of devotional service and engaged in material activities has no good qualities. Even if he is adept at the practice of mystic yoga or the honest endeavor of maintaining his family and relatives, he must be driven by his own mental speculations and must engage in the service of the Lord's external energy. How can there be any good qualities in such a man?. ¶

Ātreya Ṛṣi: All these Indians coming to this country to benefit, maybe we should go to India to take care of Vṛndāvana and all these other lands. ¶

Prabhupāda: Yes. Therefore, this movement is there. ¶

Ātreya Ṛṣi: Will we be someday in charge of those? ¶

Prabhupāda: Oh, yes. We are already in charge. You simply take charge. Your appointment is already there; simply go and take charge over. ¶

Śyāmasundara: No one else can even dispute it. ¶