Somehow or other we have to turn to Kṛṣṇa consciousness. That is the aim of life. This human form of life is meant for this purpose, 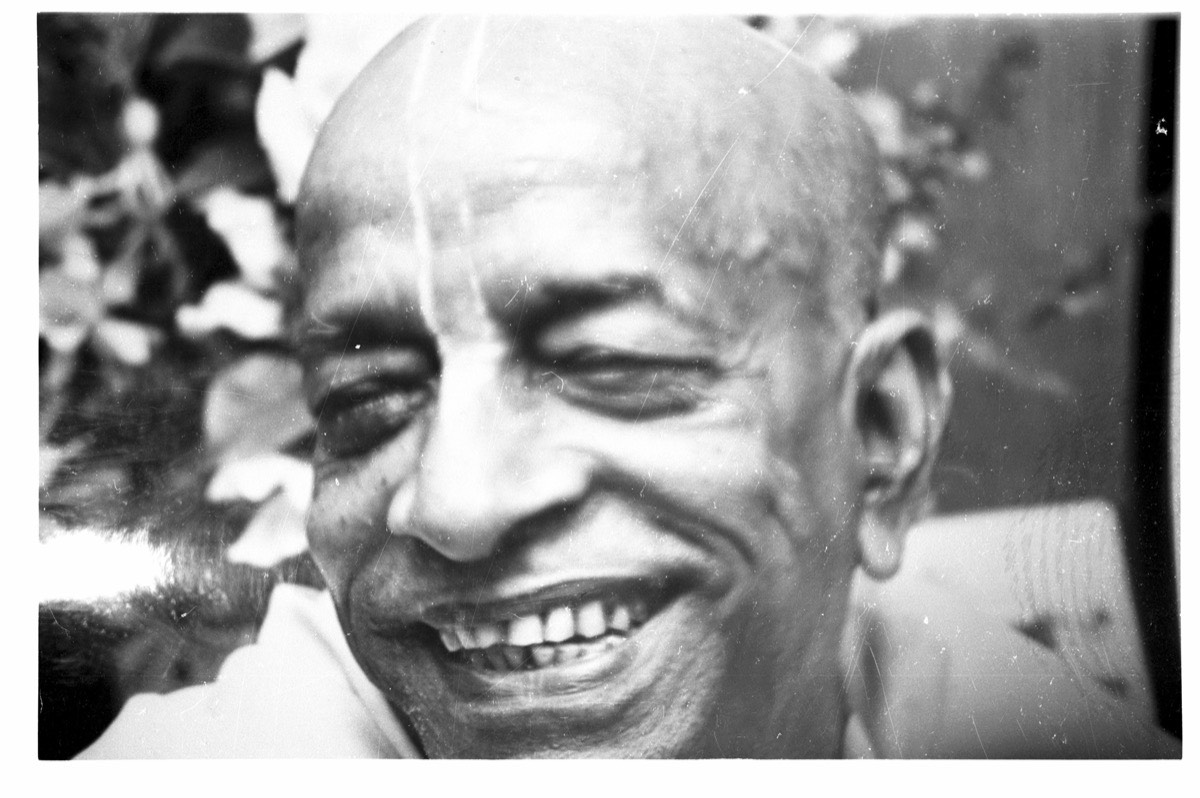 The supreme occupation [dharma] for all humanity is that by which men can attain to loving devotional service unto the transcendent Lord. Such devotional service must be unmotivated and uninterrupted to completely satisfy the self.

Somehow or other we have to turn to Kṛṣṇa consciousness. That is the aim of life. This human form of life is meant for this purpose, yato bhaktir adhokṣaje and… [someone speaking in Hindi] ¶

[break] …religion you may profess, it does not matter. It must teach you how to render loving service to the Lord. That is required. [break] …pravṛtti and nivṛtti. So there are two kinds of dharma. Dharma means occupational duties. [Hindi] [break] ¶

Prabhupāda: In this material world, we come here to enjoy. Not enjoy, but to satisfy our senses. This is material life. But that is not the right process, to develop the sense enjoyment process. The modern civilization, they are increasing the sense enjoyment process, making life more and more complicated, because the real motive of human life is to develop devotional service to the Lord. Or in other words, instead of gratifying our senses we should gratify the senses of the Lord. That is required. ¶

Everything animate or inanimate that is within the universe is controlled and owned by the Lord. One should therefore accept only those things necessary for himself, which are set aside as his quota, and one should not accept other things, knowing well to whom they belong.. Directly you cannot. The best example is you give me nice a foodstuff, rasagullā. The fingers catches it, but it cannot enjoy directly. That is not possible. It must give to the stomach, and when it is given to the stomach, the energy produced by eating that foodstuff is distributed not only in this finger but in other fingers and other parts of the body. ¶

O son of Kuntī, all that you do, all that you eat, all that you offer and give away, as well as all austerities that you may perform, should be done as an offering unto Me.: “You work. Whatever you like, you work, but ultimately you give Me the result of it.” That is Kṛṣṇa consciousness. We do not want to stop anything. People may not misunderstand that we want to stop business, we have to stop industries, our…, our general modes of life. You be engaged in your occupational duties, but resultant action of that duty you offer to Kṛṣṇa. Don’t take it. Karmaṇy evādhikāras te mā phaleṣu kadācana [Bg. 2.47]plugin-autotooltip__small plugin-autotooltip_bigBhagavad-gītā As It Is 2.47

You have a right to perform your prescribed duty, but you are not entitled to the fruits of action. Never consider yourself to be the cause of the results of your activities, and never be attached to not doing your duty.. Don’t take the result. Then it will be… ¶

Work done as a sacrifice for Viṣṇu has to be performed, otherwise work binds one to this material world. Therefore, O son of Kuntī, perform your prescribed duties for His satisfaction, and in that way you will always remain unattached and free from bondage.. Otherwise you’ll be entangled. Either the result will be good or bad, so you have to accept it. Generally we like that—there are good, bad. The śāstric process is that whatever you’re destined to get, you’ll get it. ¶

Prahlāda Mahārāja continued: My dear friends born of demoniac families, the happiness perceived with reference to the sense objects by contact with the body can be obtained in any form of life, according to one's past fruitive activities. Such happiness is automatically obtained without endeavor, just as we obtain distress.. You…, you are destined to a certain standard of sukha, happiness, according to your body. Just like a man is born in a millionaire’s family, family. He has got a type of body so the enjoyment is there, and it is… And at the same time a man is born in a cobbler’s family, he cannot expect the enjoyment of the millionaire’s family. That is not possible, because he has got a different type of body and he has got a different type of body. So śāstra says as you have got body, so your happiness, let us take the happiness portion. Distress also is there. There cannot be any unalloyed happiness. There must be distress. But you take only the good portion, happiness portion. ¶

So our time should be saved for improving Kṛṣṇa consciousness. That is the law of nature. Don’t try to improve your material condition. The material happiness, whatever is destined according to your body, which is already given to you, and you’ll have it, without any endeavor. Yathā dukham ajajñātaḥ. Just like you have to enjoy or suffer also, that is also according to the body, ajajñātaḥ. You don’t endeavor for the distress, but you get it. Similarly, you don’t endeavor for happiness—you’ll get it. ¶

The supreme occupation [dharma] for all humanity is that by which men can attain to loving devotional service unto the transcendent Lord. Such devotional service must be unmotivated and uninterrupted to completely satisfy the self.. We should simply endeavor for developing Kṛṣṇa consciousness. Then, yayātmā samprasīdati, then you’ll be happy. Otherwise you’ll never be happy. This is Kṛṣṇa consciousness philosophy, sum and substance. Now you can ask me question, if you have got any doubt. ¶

The bewildered spirit soul, under the influence of the three modes of material nature, thinks himself to be the doer of activities, which are in actuality carried out by nature.. The whole summary is that this human form of life is very, very important, and it is meant for developing Kṛṣṇa consciousness. If you neglect this business and simply engage for sense gratification, that is spoiling time. Śrama eva hi kevalam [SB 1.2.8]plugin-autotooltip__small plugin-autotooltip_bigŚrīmad Bhāgavatam 1.2.8

The occupational activities a man performs according to his own position are only so much useless labor if they do not provoke attraction for the message of the Personality of Godhead.. ¶

Guest (1): Another point also, the Jainism and Buddhism, they [indistinct] the body… [break] ¶

Prabhupāda: …with the body? The body’s already in trouble. ¶

Prabhupāda: No, we don’t require. Of course, there is a process which is called tapasya. That is another thing. Tapasya, according to our this Kṛṣṇa consciousness, we also undergo tapasya. Just like we say that “Don’t have illicit sex life.” ¶

Guest (1): If you follow yama and niyama then… ¶

Prabhupāda: This is yama and niyama, that “You don’t have illicit sex life, don’t eat meat, don’t take intoxication, don’t engage yourself in gambling, and observe ekādaśī fasting, janmaṣṭamī, chant Hare Kṛṣṇa.” So our method is very simple. Everyone can follow. [break] ¶

Devotee: Material prosperity is not dependent upon duty. ¶

Prabhupāda: What is that duty? ¶

Prabhupāda: “That is karma” means that whatever happiness he has to enjoy, that will come automatically. Otherwise, he is destined to have something—that will come. Yathā dukham ajajñātaḥ. So our only point is that human life is very valuable. We should not waste it for nothing. Modern…, modern method of civilization is to develop economic development, to live very comfortably. That’s all right. Do it. ¶

Prabhupāda: No, that is not… [laughing] ¶

Śyāmasundara: No, but I mean it goes to show that even though no matter how much we try to develop… ¶

To those who are constantly devoted and worship Me with love, I give the understanding by which they can come to Me.. Those who are engaged in Kṛṣṇa’s service, they are never put into distress. Kaunteya pratijānīhi na me bhaktaḥ praṇaśyati [Bg. 9.31]plugin-autotooltip__small plugin-autotooltip_bigBhagavad-gītā As It Is 9.31

He quickly becomes righteous and attains lasting peace. O son of Kuntī, declare it boldly that My devotee never perishes.. Kṛṣṇa’s devotee is never vanquished. Even they are artificially put into distresses… ¶

Just like Pāṇḍavas, they were put into distresses, artificially. Prahlāda Mahārāja was put into distresses by his father even, but ultimately he came out victorious. So one…, we should not be disturbed, even superficially we see that a devotee is in distress. Devotee, real devotee, he does not take anything as distress. He takes everything as Kṛṣṇa’s mercy. Tat te ‘nukampāṁ su-samīkṣamāṇo [SB 10.14.8]. Otherwise, that is not pure devotion. ¶

Actually devotee’s never in distress. People may see that he is in distress. Just like there is a very good example—you are going to Māyāpur, you’ll find—his name was Śrīdhara, Kolaveca Śrīdhara. His income was very poor. At night he would chant Hare Kṛṣṇa mantra very loudly: “Hare Kṛṣṇa, Hare Kṛṣṇa…” His neighboring friends would say, “This man has no income, and because he is hungry now he is chanting ‘Hare Kṛṣṇa, Hare Kṛṣṇa.’ He’s hungry.” So one day Caitanya Mahāprabhu… Caitanya Mahāprabhu used to take away his possession, flowers. He was selling, making business, making some donā, donā. What is called, donā? ¶

Prabhupāda: Cup, yes, that was his business. So Caitanya Mahāprabhu take away some of his fruits and donā, as a friend. So one day Caitanya Mahāprabhu said that “Śrīdhara, you take benediction from Me.” So he said, “What benediction, Sir?” “Well, you are so poor that your house is not even properly repaired. There are so many holes in the roof.” He, “Still, I have got a nice house, because it is better than the bird’s nest. ¶

They have no roof. [laughter] They have no roof, and they live on the tree. I have got a shelter. What is the difficulty? There is no difficulty.” In this way Caitanya Mahāprabhu wanted to offer him so many thing, and he said that “No, I have no trouble for this. If You want to benedict me, please give me pure devotion on Your lotus feet.” ¶

Prabhupāda: Bhakti. So that is pure devotion. That we should hanker after, how to fix up our mind always in the service of the Lord. That we are trying to teach, that’s all. [end] ¶