Prabhupāda: What is that original cause, chunk? Can you say? 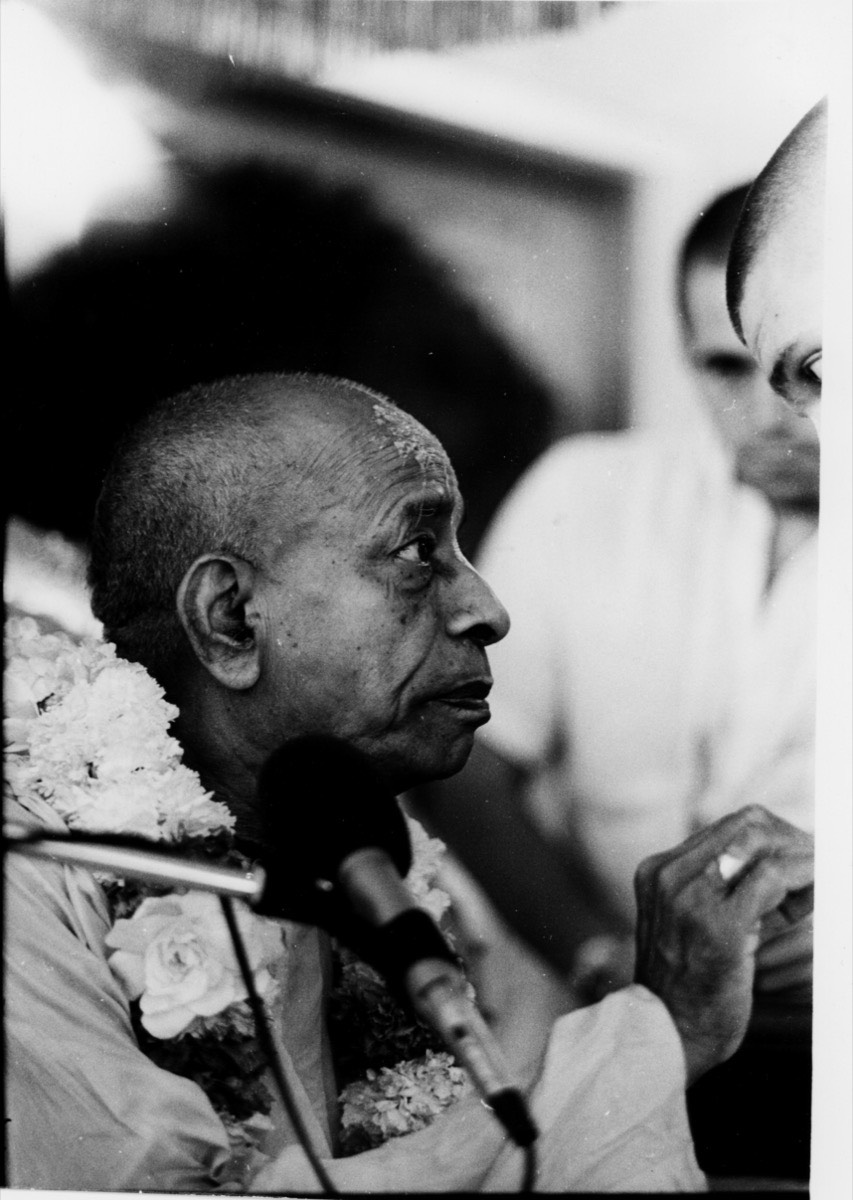 Prabhupāda: What is that original cause, chunk? Can you say? ¶

Prabhupāda: So anyway, that is not sentient. That is material. Gas is also material. Gas is another form, vapor. Vapor. Vapor is made out of water. Water or… Vapor is air, major portion of air and minor portion of water. In this way, vapor. So that means it is airy. But no. Air has got its cause. They do not know. Air has got its cause, the sky. The sky has its cause. In this way there is creation. In the Śrīmad-Bhāgavatam everything is explained. ¶

So this Brahma-saṁhitā, the point is, in this Brahma-saṁhitā Kṛṣṇa’s name is there. In the Atharva Veda there is Kṛṣṇa’s name. So our process of knowledge, if there is Vedic evidence, that is perfect. You don’t require to experiment. Experimental knowledge is never perfect. The same example as we have given several times: that which is unknowable, inconceivable, that knowledge you cannot get by experiment. That is not possible. You have to receive the knowledge from authority. Just like you cannot understand who is your father by experiment, laboratory. Bring every man and analyze him whether he is your father. Is it possible? No. How many men you will bring in the laboratory? That is not possible. But if you approach to the authority, the mother, immediately you get the knowledge. Ask your mother, “Who is my father?” She’ll say, “Here is your father.” That means you receive the knowledge from the authority, not by experimental knowledge. Which is inconceivable, beyond your perception, beyond your imagination, that knowledge you cannot get by experiment. They are trying to make experi… [break] …soul. The so-called scientists, they say, “We are trying.” You can try on, but it is beyond your experience, beyond your knowledge. Your senses are all imperfect. You can… You cannot understand soul by experimental knowledge. You have to hear from the authority. Just like Kṛṣṇa says, ¶

As the embodied soul continually passes, in this body, from boyhood to youth to old age, the soul similarly passes into another body at death. The self-realized soul is not bewildered by such a change.

As the embodied soul continually passes, in this body, from boyhood to youth to old age, the soul similarly passes into another body at death. The self-realized soul is not bewildered by such a change.. Dehe means “Within this body, there is the proprietor of the body.” That is soul. Now, by experimenting, by taking in somebody’s body, just like in medical science they dissect the body, you cannot find out. It is so small. Therefore you are saying, “There is no soul.” But there is soul. From your experimental knowledge, you cannot understand where is that soul, but there is soul. When the soul is out, the body is dead, useless. That we can experience. Anubhāva. It is called anubhāva perception. So anyone, any sane man, can understand there is something missing. The scientists also say, “the something missing.” Now, what is that missing, they cannot say. If they knew it, what is missing, then they are scientists, they could produce again that thing by laboratory mixture of chemicals and put it into the body, and he becomes alive. No, that is not possible. Acintyāḥ khalu ye bhāvā na tāṁs tarkeṇa yojayet. Therefore Veda says that “Don’t uselessly argue on subject matter which is beyond your perception.” That is not the process. ¶

O my Lord, Śrī Kṛṣṇa, son of Vasudeva, O all-pervading Personality of Godhead, I offer my respectful obeisances unto You. I meditate upon Lord Śrī Kṛṣṇa because He is the Absolute Truth and the primeval cause of all causes of the creation, sustenance and destruction of the manifested universes. He is directly and indirectly conscious of all manifestations, and He is independent because there is no other cause beyond Him. It is He only who first imparted the Vedic knowledge unto the heart of Brahmājī, the original living being. By Him even the great sages and demigods are placed into illusion, as one is bewildered by the illusory representations of water seen in fire, or land seen on water. Only because of Him do the material universes, temporarily manifested by the reactions of the three modes of nature, appear factual, although they are unreal. I therefore meditate upon Him, Lord Śrī Kṛṣṇa, who is eternally existent in the transcendental abode, which is forever free from the illusory representations of the material world. I meditate upon Him, for He is the Absolute Truth.. Now, what type of that supreme cause is that? Is it a stone or sentient? No. Vyāsadeva informs, no. The original cause, how it can be a stone? Original cause cannot be. It must be sentient. Creator must be sentient. Without brain, without creative power, how there can be creation? Where is your argument? No, that is not. These are false arguments. Therefore Vyāsadeva gives you information that He is sentient, in full knowledge. In full knowledge. What kind of knowledge? Anvaya-vyatirekābhyām, directly and indirectly. That is full knowledge. Just like I say “my head” or “my hair,” but if I ask you or you ask that “How many hairs are there?” oh, I am ignorant. I do not know. Similarly, we are so imperfect that we may have little knowledge even of our own body. We are eating, but how the eatables are being transformed into secretion, how they are becoming blood, how they are being passed through the heart, and it becomes red, and again diffuse all over the veins, and in this way the body is maintained, we know something, but how the work is going on, how this factory is going on, how the factory, machine, is working, we have very little knowledge. So indirectly we know that “This is my body.” “Indirectly” means we have heard, but we have no direct knowledge. But Kṛṣṇa, the Supreme, the original of everything, He knows everything. Anvaya-vyatirekābhyām, indirectly and directly. Kṛṣṇa knows. I do not know how my body is working, but Kṛṣṇa knows. That is explained in the Bhagavad-gītā: kṣetra-jñaṁ cāpi māṁ viddhi sarva-kṣetreṣu bhārata [Bg. 13.3]plugin-autotooltip__small plugin-autotooltip_bigBhagavad-gītā As It Is 13.3

O scion of Bharata, you should understand that I am also the knower in all bodies, and to understand this body and its owner is called knowledge. That is My opinion.. Kṣetra-jña… He is real, Supersoul. There is a Supersoul who is in knowledge of everything. That is explained in the Bhagavad-gītā: sarvasya cāhaṁ hṛdi sanniviṣṭo mattaḥ smṛtir jñānam apohanaṁ ca [Bg. 15.15]plugin-autotooltip__small plugin-autotooltip_bigBhagavad-gītā As It Is 15.15

I am seated in everyone's heart, and from Me come remembrance, knowledge and forgetfulness. By all the Vedas am I to be known; indeed I am the compiler of Vedānta, and I am the knower of the Vedas.. Mattaḥ smṛtir jñānam apohanam. Full knowledge. I have no full knowledge of my body, but He has got full knowledge. I forget. What I did in the morning, early in the morning at four o’clock, if you ask me, I’ll have to remember, “Yes, what I was doing?” We are so forgetful. Similarly, how we can remember of our past life? We are so forgetful. But Kṛṣṇa… [end] ¶