Prabhupāda: This Kṛṣṇa consciousness movement is a self-purification movement. The method is vibration of transcendental sound. This Hare Kṛṣṇa, this sound, is not material sound. It is descended from the spiritual world. Kṛṣṇa and Kṛṣṇa 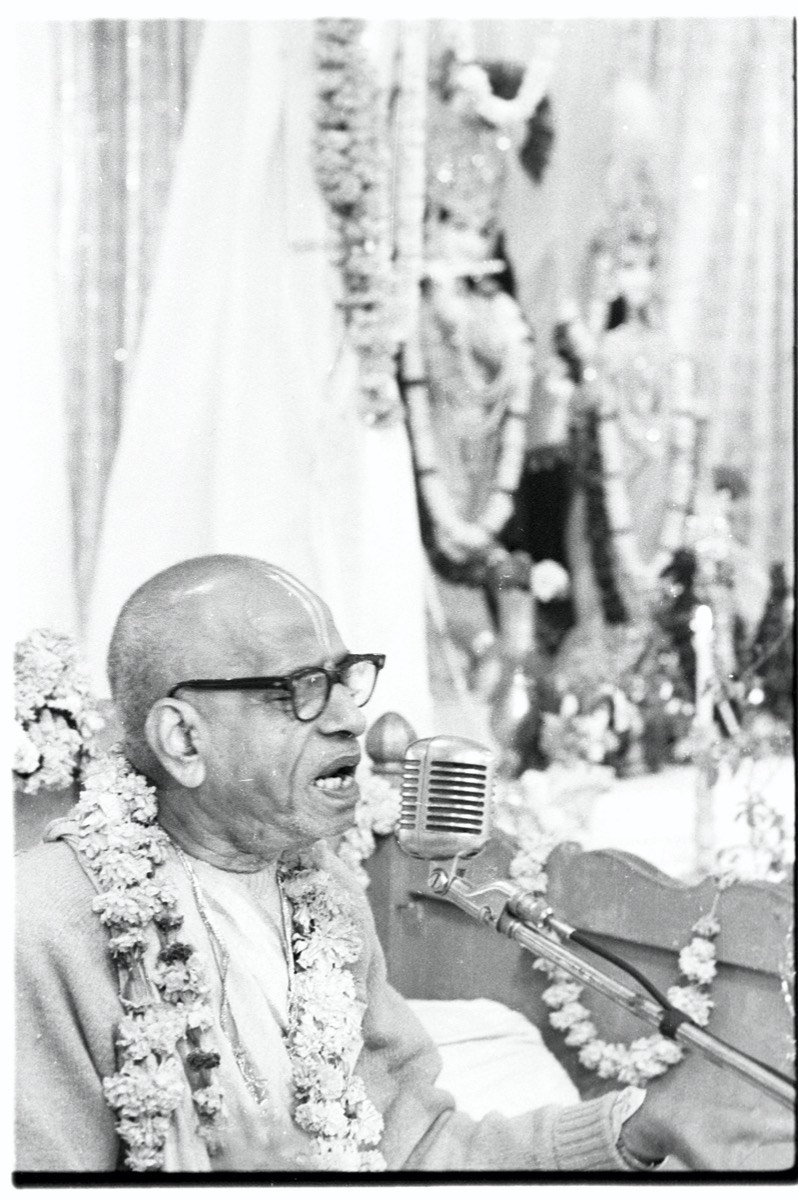 Prabhupāda: This Kṛṣṇa consciousness movement is a self-purification movement. The method is vibration of transcendental sound. This Hare Kṛṣṇa, this sound, is not material sound. It is descended from the spiritual world. Kṛṣṇa and Kṛṣṇa’s name—not different. Abhinnatvāṁ nāma-nāminoḥ. As in this material world there is difference between the name and the substance… If you are thirsty, then if you simply chant “water, water, water,” your thirst will not be quenched. You have to get the substance water. But in the spiritual world it is, being absolute, the name and the person whose name we are chanting, they are the same. Therefore by chanting this holy name of God, Kṛṣṇa, Hare Kṛṣṇa… Hare is addressing the spiritual energy of the Lord, and Kṛṣṇa is the Supreme Lord. So by being in touch with the Supreme Lord and His energy directly, we become purified. Exactly like if you take one iron rod, put into the fire, it becomes warner, warmer, and at last it becomes red hot. When it is red hot, it is no longer iron; it is fire. Similarly, if you constantly become in touch with the Supreme Lord by chanting His holy name, which is not different from the Supreme Lord, then you become spiritually purified. And as soon as you are spiritually purified, then all misunderstandings of this material world immediately vanquished. That is called Kṛṣṇa consciousness. Every living entity is conscious. The original consciousness is polluted by contamination of this material world. Just like water, when it falls from the cloud directly, it is clear and without any dirty things, but as soon as it touches the ground, it becomes muddy. Again, if you decant the muddy portion of the water, it becomes again clear. Similarly, our consciousness, being polluted by the three modes of material nature, we are thinking one another as enemy or friend. But as soon as you come on the platform of Kṛṣṇa consciousness, you feel that “We are one. The center is Kṛṣṇa.” And Kṛṣṇa says in the Bhagavad-gītā, ahaṁ bīja-pradaḥ pitā [Bg. 14.4]plugin-autotooltip__small plugin-autotooltip_bigBhagavad-gītā As It Is 14.4

It should be understood that all species of life, O son of Kuntī, are made possible by birth in this material nature, and that I am the seed-giving father.. There are 8,400,000 species of life in different forms. The father, the seed-giving father, is Kṛṣṇa, or the Lord, the Supreme Lord. By misunderstanding, we are thinking that “I am Indian, you are American,” or “You are brāhmaṇa, I am śūdra,” or “You are Hindu, I am Muslim.” These differences are only designations. So as soon as we are freed from the designation—sarvopādhi-vinirmuktaṁ tat-paratvena nirmalam [Cc. Madhya 19.170]plugin-autotooltip__small plugin-autotooltip_bigŚrī Caitanya-caritāmṛta, Madhya-līlā 19.170

" 'Bhakti, or devotional service, means engaging all our senses in the service of the Lord, the Supreme Personality of Godhead, the master of all the senses. When the spirit soul renders service unto the Supreme, there are two side effects. One is freed from all material designations, and, simply by being employed in the service of the Lord, one's senses are purified.'—when we become nirmalam, clear—clear consciousness and Kṛṣṇa consciousness is the same thing—then all our misunderstanding is vanquished immediately. Then we can understand what is God, what I am, what you are, what is our relationship, and when we act accordingly, there is no controversy, no misunderstanding. ¶

So this Kṛṣṇa consciousness movement is being spread all over the world on the scientific basis of Vedic culture. People are accepting. This Indian culture is being accepted all over the world. We have got fifty branches all over the world. Now we have come to establish some branches in India. We invite everyone. There is no discrimination that “You are such, you are such.” Anyone can join us. And the joining method is very simple. Just like you have seen, even a small child can chant and dance. So our method is very simple. Please come, possible, try to understand little philosophy. Then you see how much it is effective, how you can feel transcendentally, how you can become advanced spiritually. The method is very simple, and we request everyone without any discrimination, never mind what you are: “Please come and join this movement and you’ll be happy.” ¶

Devotee: Do any of the people from the press have a question to ask? [break] ¶

O son of Kuntī [Arjuna], I am the taste of water, the light of the sun and the moon, the syllable om in the Vedic mantras; I am the sound in ether and ability in man.. “I am the taste of the water.” When we drink water, we feel very much satisfied. The taste of water is so nice. Kṛṣṇa says, “I am that taste.” Now, if you are drinking daily water and you are tasting it, so how you can say that you have not seen God? If you have tasted that water, then you have seen God. Prabhāsmi śaśi-sūryayoḥ: “I am the shining principle of sun and the moon.” You are seeing every day the sunshine and the moonshine. How you can say that you have not seen God? So this is the science of God, how to see Him. Just like when there is smoke, you can understand that there is fire, although the fire is hidden, similarly, by the symptoms, how God is acting, how His energies are spread all over the world, if you study the energy of God, then you can see God, you can feel God, you can associate with God, and you become godly, or purified. ¶

Prabhupāda: Detailed program of this camp? That you can say. ¶

Guest: I have the philosophy of the spiritual world. Comments on Bhagavad-gītā are given… ¶

The Blessed Lord said: I instructed this imperishable science of yoga to the sun-god, Vivasvān, and Vivasvān instructed it to Manu, the father of mankind, and Manu in turn instructed it to Ikṣvāku.. Kṛṣṇa says that “This system of bhagavad-bhakti-yoga was spoken first by Me to the sun-god.” Vivasvān manave prāha manur ikṣvākave ‘bravīt. “And Vivasvān, the sun-god, said this philosophy to his son Manu, and Manu said to his son Ikṣvāku.” Evaṁ paramparā-prāptam imaṁ rājarṣayo viduḥ [Bg. 4.2]plugin-autotooltip__small plugin-autotooltip_bigBhagavad-gītā As It Is 4.2

This supreme science was thus received through the chain of disciplic succession, and the saintly kings understood it in that way. But in course of time the succession was broken, and therefore the science as it is appears to be lost.. So from this formula, if we study Bhagavad-gītā, then taking the age of Manu, Vivasvān, Ikṣvāku, it becomes not less than forty millions of years. So Bhagavad-gītā is not a new thing. It is coming down from an age forty millions of years back. [break] And besides that, we are represented in Tokyo, in Canada, in Europe, in America, like that. We have got fifty centers all over the world. ¶

Guest: What was the purpose of this festival here? ¶

Prabhupāda: The purpose of this festival is to induce you to chant this holy name, Hare Kṛṣṇa mantra. That’s all. ¶

Guest: How many branches in India? ¶

Prabhupāda: At least Calcutta, Bombay, Delhi. Three branches. In Bombay we have got already an apartment on the Warden Road, 89 Warden Road. We are paying 2,500 rupees per month. Similarly, we have got a center in Calcutta, Albert Road, near Park [?] Station, Calcutta 16. Three, Albert Road. There also we are paying one thousand rupees rent. So now we are in rented house. Out of about five [fifty] centers all over the world, we have got about five centers which is our own. Otherwise, we are in the rented house. For our expenditure is very high. In each centers, according to Indian exchange, we spend not less than five thousand and up to twenty thousand per month. But we are pulling on by selling our literatures, books, and little contribution from the public. ¶

Guest: List of all the names of your books. ¶

Prabhupāda: Where are the books? [break] Therefore we have to erect something. If I call in a ground, open ground, perhaps you’ll not come. Therefore we require some temples. We are not concerned with architecture. We are concerned with spiritual life. We erect temple for worshiping Rādhā-Kṛṣṇa, Kṛṣṇa, the Supreme Personality of Godhead. [end] ¶