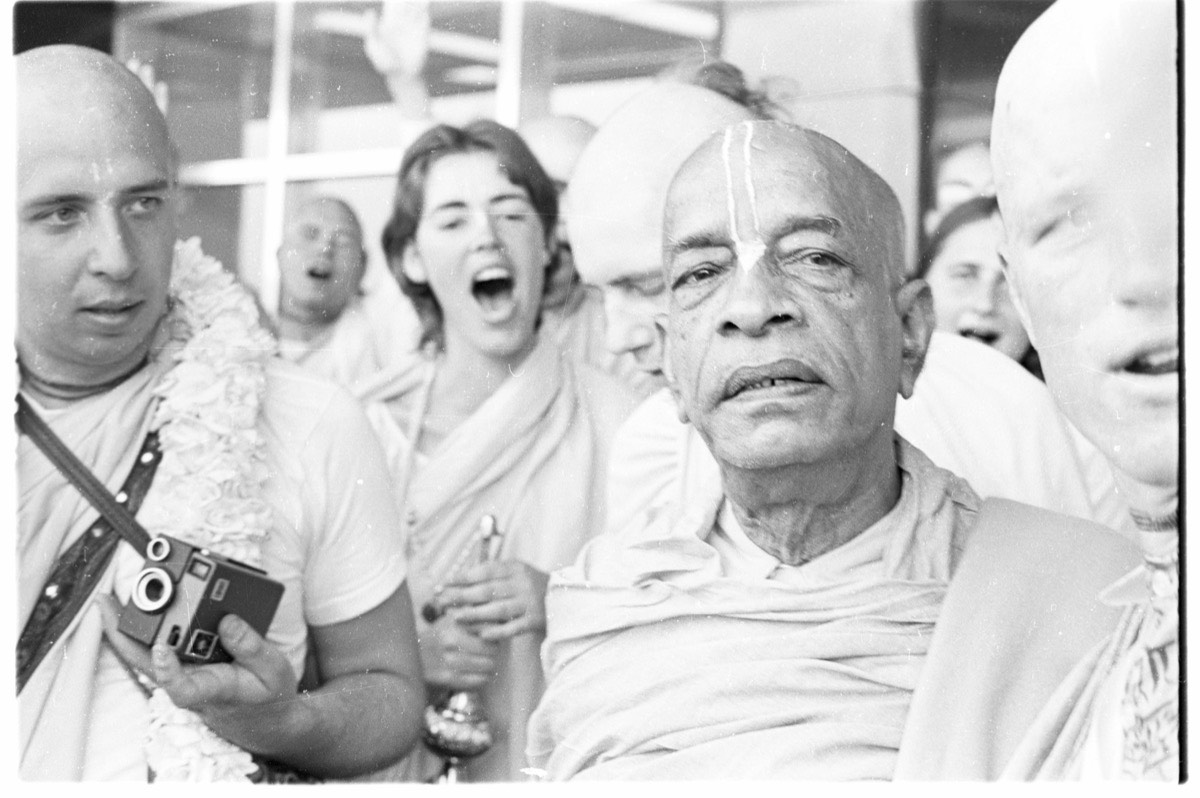 Prabhupāda: He can take as we are going on. What is this? Hare Rāma Hare Rāma Rāma Rāma… [pause] So when it is printed? I never saw it. ¶

Again repeat the first mantra. [devotees repeat the first mantras and Śrīla Prabhupāda sings the second with them] The first one again repeat. [repeats] The meaning of this mantra, that I offer my humble obeisances to Lord Nṛsiṁha, who is the source of bliss to Prahlāda, but hiraṇyakaśipor vakṣaḥ. But his father Hiraṇyakaśipu, on his chest the nails of His finger is just like chisel cutting the stone. The same Personality of Godhead is prahlāda āhlāda-dāyine. Āhlāda means pleasure. For Prahlāda… Prakṛṣṭa-rūpeṇāhlāda, prahlāda. A devotee is, being always in Kṛṣṇa consciousness, naturally he is in blissfulness. Still more, when he meets or associates with his Lord, still more blissfulness. That is the position of the theist devotee. Whereas the atheist nondevotee, he’s always feeling like a strike of the chisel, like what do you call? Stone cutting chisel. Nakha. Nakhālaye. Simply by the nails of His finger. All right. Where is that book? Now this Bhāgavatam. Yes. Oṁ namo bhagavate vāsudevāya. [with devotees-begins with chanting of verses S.B. 2.1.1 through 2.1.10] Then text number 11. [chanting responsively] ¶

O King, constant chanting of the holy name of the Lord after the ways of the great authorities is the doubtless and fearless way of success for all, including those who are free from all material desires, those who are desirous of all material enjoyment, and also those who are self-satisfied by dint of transcendental knowledge.

Again. [chants verse with devotees] Again. [everyone repeats] Etan nirvidyamānānām. There are three classes of men. One class of men, karmīs, they are trying to enjoy the material resources. Icchatām, always desire. “I want this, I want this, I want this.” And another class, they are con… or rather, what is called? Frustrated. After trying utmost, “I want this, I want this, I want this,” when at the end do not get anything, he is frustrated. That is called nirvidyā. “I don’t want.” Or actually one is satiated or disgusted. “No more material world. I don’t want it.” They are called nirvidyamānānām. So the one class is trying to possess and another class is trying to renounce. “I don’t want.” And another class is akuto-bhayam. Akuto-bhayam. Who is akuto-bhayam? Akuto-bhayam means one who does not fear. And who does not fear? Because fearfulness is one of the items of our conditional life. Āhāra-nidrā-bhaya-maithuna. Eating, sleeping, fearing, and mating. So who is without any fear? That means he’s also liberated. He’s not in the material platform, transcendental. Who is out of the limits of fearfulness. ¶

So akuto-bhayam means the devotees. The devotees, just like Prahlāda Mahārāja, his father teased him in so many ways but he was not at all fearful. He was simply thinking of Nṛsiṁha-deva and he was fearless. So only the devotee who has fully surrendered to Kṛṣṇa, he can be fearless. Nārāyaṇa-parāḥ sarve na kutaścana bibhyati [SB 6.17.28]plugin-autotooltip__small plugin-autotooltip_bigŚrīmad Bhāgavatam 6.17.28

Devotees solely engaged in the devotional service of the Supreme Personality of Godhead, Nārāyaṇa, never fear any condition of life. For them the heavenly planets, liberation and the hellish planets are all the same, for such devotees are interested only in the service of the Lord.. Nārāyaṇa-parāḥ means devotees who have dedicated their life to the service of Nārāyaṇa, Kṛṣṇa. Na kutaścana bibhyati. He does not fear in any condition of life. So here, icchatām akutaḥ. Icchatām means those who are desiring. Nirvidyamānānām means those who are not desiring, renouncing. And the other class, akuto-bhayam, fearless. And yoginām. Another class-mystic yogis. So generally, these four classes men are there. So Śukadeva Gosvāmī says that for all of them, either he is karmī or he is jñānī or he is yogi or he is bhakta. Karmī means fruitive worker, and jñānīs means empiric philosophers, and yogis, mystic, I mean to say, yogis, and bhaktas, and the devotees. Generally, these four classes of men. ¶

So Śukadeva Gosvāmī gives his judgement. Nṛpa, “My dear king, for all these classes of men,” nirṇītam, “it is already decided.” This is Vedic conclusion. You haven’t got to search out. You have to take information from the authority. So here Śukadeva Gosvāmī is authority, that “For all these classes of men this is decided conclusively.” What is that? Harer nāmānukīrtanam. Chant Hare Kṛṣṇa. Either you are jñānī, either you are yogi, either you are karmī, you desiring something or not desiring something, but you have got your objective, perfection of life. So if you want that, then chant Hare Kṛṣṇa Hare Kṛṣṇa Kṛṣṇa Kṛṣṇa Hare Hare, Hare Rāma Hare Rāma Rāma Rāma Hare Hare. Thank you very much. ¶

Karandhara: We’re going to pose. We’re just about ready. Everyone can pose? ¶

Prabhupāda: This is all right. Oh yes, special pose. ¶

Karandhara: If everyone stands up and dances then we won’t be able to… You can sit for just a minute longer. ¶