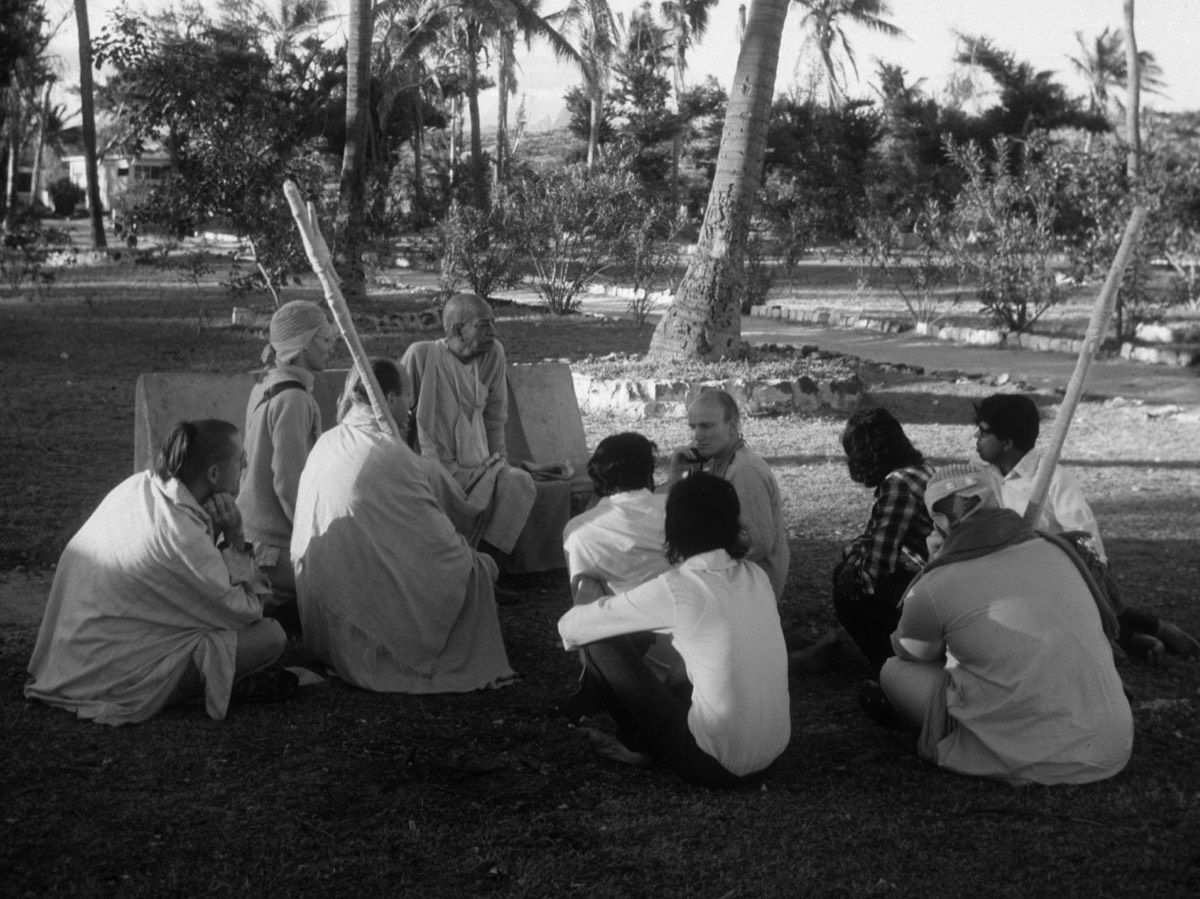 So Lord Caitanya is giving one evidence from Śrīmad-Bhāgavatam: ¶

In the Śrīmad-Bhāgavatam it is said that “The Absolute Truth is one, without any duality. He is simply named in different ways.” And what are the different names? “Brahman, Paramātmā and Bhagavān.” ¶

Lord Caitanya says that “The conception of Brahman is that it is the rays of the body of Kṛṣṇa. Just like the sunshine is the rays of the body of the sun disc, similarly,” brahma-aṅga-kānti tāṅra nirviśeṣa prakāśe. And in that brahma-jyotir, or rays, there is no variegatedness. Just like if you all of a sudden see to the sun, you don’t find any variegatedness in the sky. It appears just like only dazzling effulgence. But when the sunlight is not there, we can see millions and millions of stars in the firmament. So in the Upaniṣad also, it is prayed that “My Lord, You kindly move this curtain of glaring effulgence so that I can actually see You.” ¶

So one who is dazzled by this glaring effulgence of the rays of Kṛṣṇa, they can realize the Supreme Lord or the Supreme Absolute Truth as impersonal. Sūrya yena carma-cakṣe jyotirmaya bhāse. Carma-cakṣe, with our present eyes, defective… All our senses are defective. We are very much proud of our eyes. I want to see personally. But we do not know that with these eyes or any sense, they are all defective. They are not perfect. Just like in the glare of the sunshine, oh, we see nothing. We see sometimes darkness. So we cannot believe these eyes or senses. We have to take information of perfect knowledge from the authorities. That is the Vedic way. So those who want to see God or the Supreme Absolute Truth by the agency of their imperfect senses, they say that God is impersonal. They’re imperfect. That is a realization of the imperfect senses. Perfectly, the perfectly vision, perfect vision of the Supreme Lord is a person. Just like nobody can enter into the sun disc. They can say from distant place, “Oh, there is nothing. It is simply fire.” But from scripture we understand, “No, that is a planet.” And as in this planet we have got so many variegatedness, similarly, in that planet also, there are… In every planet. There is no reason to disbelieve that in, in the, in other planets there is no life, there is no variegatedness. No. According to Vedic literature, it is not acceptable. Each and every planet, there is variegatedness as we find in this planet. The difference is that in some of the planets earthly matter is prominent, some of the planets fiery elements are prominent. So in the sun, sun planet, fiery elements is very prominent. There the living entities and everything, they are made of fire. ¶

So He’s giving another evidence from Brahma-saṁhitā: ¶

But what need is there, Arjuna, for all this detailed knowledge? With a single fragment of Myself I pervade and support this entire universe.. In the Bhagavad-gītā, you’ll find, all these planetary manifestations is situated in one fourth of His effulgence. Three fourths of the manifestation are in the spiritual sky. Tad brahma niṣkalam anantam aśeṣa-bhūtam. Aśeṣa-bhūtam. It is so much extended that nobody can calculate how far. We cannot calculate even the sunshine, how far it is extended, and what to speak of that original effulgence. So our knowledge is always imperfect. We cannot study even millions and millionth part of the opulence of the Supreme Lord. So it is futile to deny God because we cannot calculate His potencies and expansion of potencies. ¶

He’s giving some evidences from Śrīmad-Bhāgavatam and Bhagavad-gītā also: ¶

Now, in Śrīmad-Bhāgavatam some advanced devotee is indicating Kṛṣṇa, kṛṣṇam enam avehi: “This Kṛṣṇa…” When Kṛṣṇa was present in person, many persons studied Him in a different way, but one of them, who is pure devotee, he is describing about Kṛṣṇa that enam, “This Kṛṣṇa, this Kṛṣṇa,” kṛṣṇam enam avehi, “you should try to understand.” What is that? Tvam ātmānam akhilātmanām. Ātmānam akhilātmanām. Ātmā means the self, or soul. So we individual souls, we are part and parcel, fragmental part and parcel of the Supreme. Therefore Kṛṣṇa is to be understood as the source of all individual selves. Akhilātmā. Akhila means all. Then jagad-dhitāya: “Now, He has come, He has descended out of His causeless mercy,” jagad-dhitāya, “for the benefit of this world, this planet.” Dehīva ābhāti. Just like He appears ordinary person. Ābhāti māyayā. Māyā. This māyā is not illusion. This māyā means by His internal potency. By His internal potency, He can appear just like us, but He’s not like us. He’s the Supreme Personality of Godhead. ¶

But what need is there, Arjuna, for all this detailed knowledge? With a single fragment of Myself I pervade and support this entire universe.

Now the Lord says, Kṛṣṇa says, when Arjuna asked Him, “Kṛṣṇa, will You describe something about Your different potencies, by which You are working in this material world?” Then Kṛṣṇa describes so many things. Out of that one verse is that atha vā bahunaitena kiṁ jñātena tavārjuna: “My dear Arjuna, I have described in nutshell many of My potencies in displaying this manifested world, but you can understand one thing, that by one part, by manifestation of one of My part, I am…, I have entered all the universe and all the hearts of living entities.” Just like by one reflection of the sun, if you put millions of pots with water, by one of the potencies of the sun, you’ll find the sun is represented in every pot. During noontime, by one of the potencies of the sun, you can feel, five thousand miles away, the sun is just over your head. So, as it is possible even for a material object, so this Kṛṣṇa, the supreme spiritual form, He has got many potencies which we cannot calculate. In the Vedic literature it is said: parāsya śaktir vividhaiva śrūyate… [Cc. Madhya 13.65, purport]plugin-autotooltip__small plugin-autotooltip_bigŚrī Caitanya-caritāmṛta, Madhya-līlā 13.65

Indeed, the Personality of Godhead forgot Himself in the course of His transcendental pastimes, but His internal potency [līlā-śakti], knowing the intentions of the Lord, made all arrangements.. [end] ¶